Recently my attention was called to an article in theMissionary Monthly of Nov. 1960 written by Dr. Jerome De Jong. And since in that article he also mentions the Protestant Reformed Churches I must needs reflect a moment on it.

By the way, I used to receive the above mentioned magazine regularly. In fact I thought it was an exchange paper with The Standard Bearer. But for a long time now I received no more. Perhaps, Dr. De Jong will put forth efforts that the exchange is renewed.

I cannot quote the entire article since that would require too much space. However, I will quote sufficiently for our readers to know what it is all about.

First Dr. De Jong expresses the opinion that “the glory of the Reformed theology is also its downfall,” He explains this statement by saying that Reformed people and especially, I presume, Reformed theologians, like to set their own conception and interpretation of Scripture on the foreground and condemn those as heretics that do not agree with them.

And now I will quote him somewhat at length:

“No doubt some of this interest in theological precision is good, for a lack of understanding may very well lead to broadmindedness of the type that must find truth in everything regardless of cost. However this strong impetus toward theological precision has also been disastrous in the life of our Reformed Churches. One group separated from a previously united church in the Netherlands on the tenuous doctrine of presumed regeneration. In our own country the subject of supralapsarianism with all its consequent logical results brought about the division of the church and saw the coming of the Protestant Reformed Churches. In that same circle there was again a difference of opinion on the well-meant Gospel offer which again precipitated a crisis in the church and another division in the church of Jesus Christ. It is not the business of this article to press the one side or the other, but we want to think of the necessity of Reformed people taking moderate views on these subjects lest, for the sake of doctrinal purity, thousands go to hell every day. Here is basically the tragedy of a divided Church, millions remain unreached. How can a doctrinally pure church of 3000 members or of 100,000 or of 200,000 for that matter ever expect to make an impression all by itself on the millions lost and without Christ? Years ago when William Carey first plead for India (1792) some clergyman repelled him by saying, ‘when it pleases God to convert the heathen he will do so without your help.’ If this is your attitude then it bears careful scrutiny. I have heard good Reformed people lay such stress on the grace of God that human responsibility was simply an academic concern.”

Here I first of all want to make a few comments.

1. First of all, what Dr. De Jong writes about the origin of our Protestant Reformed Churches is not quite true. In 1924 it was not a question of infra- and supralapsarianism. How could it be? We all know that the Three Forms of Unity are infralapsarian. We all know too that in spite of this fact the supralapsarian view was allowed in the Reformed Churches. So, that was not the question in 1924. No, but it simply was the question of the well-known Three Points. And these Three Points were and are not Reformed but Arminian and Pelagian. We could not subscribe to them. Yet, we would not have left the Christian Reformed Church if only the Classes had not demanded that we should subscribe to the Three Points or, at least (in my case), keep still about them. And because we could not conscientiously do this, we were cast out. It, therefore, was not a question of supra and infra, but of being Reformed or Arminian and Pelagian.

2. Secondly, I would like to ask Dr. De Jong a question. It is this: does Dr. De Jong agree that it must be the constant effort of any church, its members and its officebearers, to keep it as pure as possible? I think that Dr. De Jong, considering the underlying note of his article, would answer positively to this question. But this raises another question. It is this: is it, then, not the calling of the, members of any church, particularly of its officebearers, to protest against the preaching and teaching of false doctrine? And now the third question. It is this: if protest in the legal channels is of no avail, so that it becomes evident that the church condones false doctrine or a worldly life, does it then not become the calling of the faithful members and officebearers to break with such a church and organize a separate church? I hardly think that Dr. De Jong is in a position to answer this question positively. If he did, he could not remain in the Reformed Church.

This is the correct conception of mission work.

This is the Reformed view of mission work because it is the only Scriptural view.

4. We all admit that the absolute sovereignty of God, on the one hand, and the responsibility of the rational-moral creature, on the other hand, constitutes a problem which we cannot solve. But this does not mean that we may place them side by side, as Dr. De Jong would have it. For that would mean that, in this respect, we would place God side by side with man. This explanation always leads to a virtual denial of the sovereignty of God. Dr. De Jong writes: “I have heard good Reformed people lay such stress on the grace of God that human responsibility was simply an academic concern.” But if we simply place the sovereignty of God side by side with human responsibility the inevitable result is that the former becomes an academic concern and is soon entirely forgotten. It is true that the Bible does not solve this problem for us. But it certainly sheds sufficient light on it to show that God sovereignly works out his counsel even by and through His rational-moral creature in such a manner that His sovereign counsel is realized while the creature remains responsible when it, too, willingly or unwillingly, works out the counsel of God. This is the clear teaching of Scripture everywhere. Let me quote just one passage. It is found in Acts 4:24-28where the Church speaks as follows: “Lord, thou art God, which hast made heaven, and earth, the sea, and all that in them is: Who by the mouth of thy servant David hast said, Why did the heathen rage, and the people imagine vain things? The kings of the earth stood up, and the rulers were gathered together against the Lord, and against his Christ. For of a truth against thy holy child Jesus, whom thou hast anointed, both Herod and Pontius Pilate, with the Gentiles, and the people of Israel, were gathered together, For to do whatsoever thy hand and thy counsel determined before to be done.”

There is more in the article of Dr. De Jong.

For, although he wrote first that “It is not the business of this article to press the one side or the other,” he, nevertheless, does exactly this in the rest of the article.

“General revelation is a necessary condition for all missionary activity. I believe that we also shall have to admit that the grace of God to all His creatures is also a great blessing for missions. We call that grace common grace. Perhaps it was the designation ‘common’ that caused the difficulty. All grace is, in a sense, supernatural. I doubt that anyone would quarrel with that statement. The fact that God permits the Gospel to be preached to all men everywhere is a token of His grace . . . .”

In other words, Dr. De Jong, evidently, subscribes to the Three Points of 1924: the preaching of the gospel is grace for all that hear it. That is, of course, his privilege. But I wish that Dr. De Jong would answer a few questions.

1. Does Dr. De Jong believe the truth of election and reprobation, whether in the supra- or in the infralapsarian sense of the word, as it is expressed in the Canons of Dordrecht chapter I not only in Art. 15, but also, for instance, in Art. 6 of the same chapter where we read: “That some receive the gift of faith from God and others do not receive it proceeds from God’s eternal decree . . . According to which decree, he graciously softens the hearts of the elect, however obstinate, and inclines them to believe, while he leaves the non-elect in their own wickedness and obduracy.” Will Dr. De Jong, then, explain how the preaching of the gospel is grace for all that hear the gospel, also for those that, under the preaching of the gospel are left in their own wickedness and obduracy?

3. Does Dr. De Jong subscribe to the teaching of the Canons in II, 10, where we read: “But that others who are called by the gospel, obey the call and are converted, is not to be ascribed to the proper exercise of free will, whereby one distinguishes himself above others, equally furnished with grace sufficient for faith and conversion, as the proud heresy of Pelagius maintains; but it must be wholly ascribed to God, who as he has chosen his own from eternity in Christ, so he confers upon them faith and repentance, rescues them from the power of darkness, and translates them into the kingdom of his own Son, that they may show forth the praises of him, who hath called them out of darkness into his marvelous light; and may glory not in themselves, but in the Lord according to the testimony of the apostles in various places.” And I ask: what grace do they obtain who do not receive this grace of repentance and faith under the preaching of the gospel? Or, in other words, what sort of grace is that so-called “common grace” whereby they are hardened?

There is still more in this article of Dr. De Jong. But this must wait for our next issue. 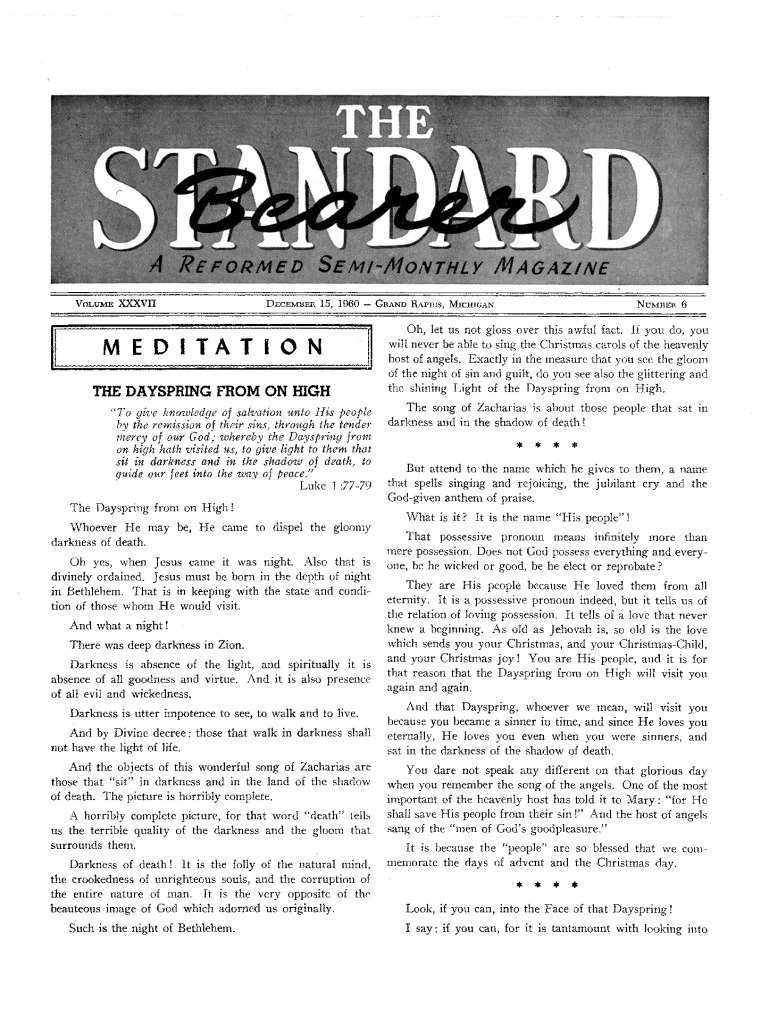