From K. H. of Redlands, Calif., we received the following communication:

In favor of this view are several facts. The ten horns shall hate the whore and shall make her desolate and naked, and shall eat her flesh and burn her with fire. Babylon’s merchandise is carried over many waters. After Babylon’s fall the merchants are weeping, and all the shipmasters and all the company in ships and sailors and as many as trade by the sea. Thus, only those who are made rich say: Alas! Only those that are directly concerned weep. In one hour Babylon falls, and seeing the speed of the rise of extreme States-socialism under dictatorships it is as in one hour that this big change comes about. Money, the only power till now, is done away with, trade is more and more an affair of the governments. The present lineup in this war is that of the “have-nots” against the “haves,” and is more or less the old order against the new: State-socialism.

Speaking often about war nowadays, it is to the interest of every one if something is written about it in the Standard Bearer, and to answer this question as soon as possible in our paper.

Hoping to hear from you, if you think it worthwhile,

Yes, indeed, the war is the subject of many a conversation every day. And the general question is, no doubt, of interest: what is the significance of this war in the light of Scripture, particularly of prophecy?

I am always somewhat hesitant to give a definite answer to this question, for the simple reason that, in my opinion, this is impossible until the things have actually come to pass. And at the time of this writing nothing decisive has as yet happened.

When I have a little more time and space for this purpose in our paper, I may probably offer some general views on this problem. But at present I confess that I am not yet ready to express definite views concerning the meaning of this war in the light of prophecy. I know that in times like these we are easily tempted to form a rather definite conception, and to determine precisely what time it is on God’s world- clock. Many do this, too. But I would rather not yield to this temptation.

This, however, does not mean, that I cannot give a rather definite answer to Mr. Heersema’s question. That answer is decidedly negative. It seems to be Mr. Heersema’s view that Germany will win this war, that the fall of the British empire is imminent, that this fall is also the fall of the capitalistic system, and, therefore, the fall of Babylon. Thus I, at least, understand his letter.

In the first place, because it is my conviction that we have not yet seen Babylon at its greatest, and, therefore, in this war we cannot see the fall of Babylon. I believe that the Bible teaches that Babylon must first become a universal world power, before her fall will be accomplished. For, Babylon is the world-power, filled with the spirit of the false prophet.

In the second place, exactly because of the fact that Babylon in the Bible is not a nation, nor a system, but a world-power, this war has nothing to do with Babylon’s fall. Suppose that Germany wins a decisive victory, which in spite of her present gains and advances still appears very improbable to me; suppose that the entire political and economic system would be changed over the entire world as a result of such a complete German victory; then what would we have? We would still have Babylon!

There are many other reasons of an exegetical nature, that I might bring against this view. But this will, perhaps, suffice for the moment to lead Mr. Heersema’s pondering in a somewhat different direction. And, of course, he may always write again! 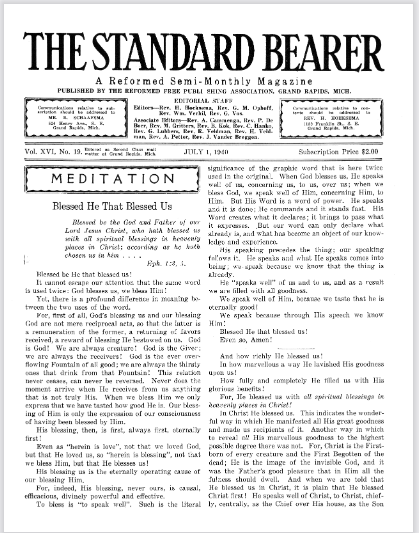