Abelard and the Doctrine of the Atonement (2)

Abelard and the Doctrine of the Atonement (2)

Abelard’s Doctrine of the Atonement

As I said earlier, the real is-sue in the controversy over the atonement of our Lord Jesus Christ was concerning the necessity of the atonement.

It seems that actually the controversy involved the relation between some of God’s attributes and the suffering and death of Christ. For example, the question was asked: If God is omnipotent, could He not simply save men by His power without having to send His Son to the suffering of the cross? Or, if God is indeed a God of mercy, would it not have been possible for God to forgive sin out of His own mercy, rather than through the means of the death of Christ? (Cf. Heidelberg Catechism, Q. & A. 11.)

Abelard answered this question by appealing to God’s benevolence. He taught that only God’s benevolence was of importance in considering the atonement of Christ. The death of Christ on the cross was not necessary to accomplish salvation. God was sufficiently benevolent simply to forgive sin.

Thus, Abelard said, no satisfaction for sin is necessary, with its fruits of pardon. Pardon was granted to a man on the basis of repentance alone. When a man turned from his sin, showed proper sorrow for his sin, and resolved to walk in obedience before God, he was pardoned from his wrong.

One could ask, of course: Well then, what about Christ’s death? If it is true that Christ did not have to die to obtain salvation, why in fact did He die? Abelard’s answer was that the death of Christ on the cross was intended only to have a beneficial moral influence and to produce sorrow for sin. The love revealed by Christ in His willingness to suffer on the cross was intended to awaken in us a similar love. This love, awakened in us by the example of the love of Christ, liberates us from the power of sin so that we can walk in obedience.

What was the church to do about this?

Very obviously, it was important that the church adopt Anselm’s position that salvation could be given only through a cross which satisfied for sin. Christ’s suffering and death had to have propitiatory value. That is, the suffering and death of Christ had to be a satisfaction for sin if it was truly to redeem.

The word “satisfaction” is the key word here. It is impossible to stress that strongly enough. It was later to become a key word in the doctrine of the Reformers and in the Reformation confessions (see Heidelberg Catechism, Lord’s Days 5 & 6).

Yet (and here is an interesting thing), the Romish Church could not swallow the doctrine of satisfaction either. The theologians were caught between the devil and the deep blue sea. They were trapped between two “impossible” positions.

I think it worthwhile to understand this as clearly as we possibly can because the issues here lie at the heart of all controversies in our day as well over the extent of the atonement.

The Romish theologians (and let this be clearly understood) could not accept Anselm’s doctrine of an absolute necessity to the atonement because the Roman Church was totally and fatally committed to the doctrine of human merit. This commitment to the doctrine of human merit had been adopted officially at the synod of Orange when pure Augustinianism was repudiated. It had been sealed when Gotteschalk, an ardent defender of Augustinianism, was martyred. It was now part and parcel of Romish theology.

But the doctrine of the absolute necessity of the atonement ruled out human merit entirely. Perhaps this is not evident immediately. But a little thought about the matter will make that clear. To the extent that man is able in some measure to contribute to his own salvation and to earn merit with God, the atoning sacrifice of Christ is not needed. If man contributes, say 10% to his salvation, that 10% is not found in the atoning death of Christ, but in the will of man and his ability to do something to save himself.

The Arminians at a later date understood this all too well. Because salvation hinged finally on the free will of man, that salvation was not efficaciously earned in the cross of Christ. And so the Arminians developed a theory of the atonement much like that of Abelard.

But the opposite is true as well. If Christ’s suffering and death are absolutely necessary for salvation, this can be true only because all the salvation of all the elect church is to be found in Christ alone. This leaves no room for human endeavor or a human contribution, for a free will of man upon which hangs the efficacy of salvation. So all human merit is expunged from the records.

We may carry this another step. If Christ’s death on the cross is for all men, and yet all men are not saved, the cross of Christ has no saving power. Then the cross is ineffective for salvation in every respect. Then there is no necessity for Christ’s suffering and death.

So Roman theologians were caught between the obvious doctrine of the absolute necessity of Christ’s death and the church’s teaching of merit. The only way to extricate themselves from this dilemma was to teach a relative necessity. Yes, they said, the atonement is necessary, but only relatively so.

And so Rome’s theologians set about that difficult task of defining what they meant by “relative merit.” We may mention a few examples here.

One theologian, Bonaventura by name, declared that Christ’s atonement was a satisfaction because such an atonement was the most fitting way to restore the sinner. It was most in keeping with God’s attributes, and most calculated to arouse sorrow for sin. Thus, though necessary, it was only relatively so.

Even the great theologian Thomas Aquinas did not want an absolute necessity to the atonement of Christ because of his commitment to the doctrine of merit. He spoke of the atonement as being necessary in a relative way because it was in keeping with God’s justice. This was an important point, because when one speaks of satisfaction, the question is: satisfaction of what? The answer has got to be: God’s justice. But Aquinas also hedged, because he taught that God could save in a different way if He wished by overlooking His justice.

Anselm’s doctrine is clear and biblical. Whether he understood that his doctrine necessarily ruled out all human merit is another question. He was a man of his times. He also lived within the church of his day and its teachings on merit. Nevertheless, he was right on Christ’s atonement.

He believed that God’s attributes are one in God. He insisted that the cross of Christ, if it revealed God’s mercy, had also to reveal God’s justice. God’s justice requires satisfaction for sin. God, if He overlooks His justice, denies Himself. He cannot do that.

Sin is of infinite demerit. An infinite price is required to pay an infinite debt. That price cannot be paid by a man. He is a sinner who increases his debt to God rather than being in a position to pay for it. He is like a man who owes $50,000 on his credit card (not, of course, Anselm’s figure). His monthly payments are $1000.00. If he could pay at all, he could pay only $100.00. Every month his debt gets bigger, not smaller.

But man cannot pay at all. The debt becomes infinite. Therefore only He who is both man and God can pay that awful debt.

We cannot enter into the whole argument here. Nor is it necessary. It is all found in our own Heidelberg Catechism in Lord’s Days 4 – 7. It is the doctrine of the reformers and of the Reformed churches to the present. It was Anselm’s doctrine. Abelard, the heretic, paved the way for many heresies.

If we are to be saved, the atonement is an absolute necessity. But then, all human merit is excluded. We are saved by grace. 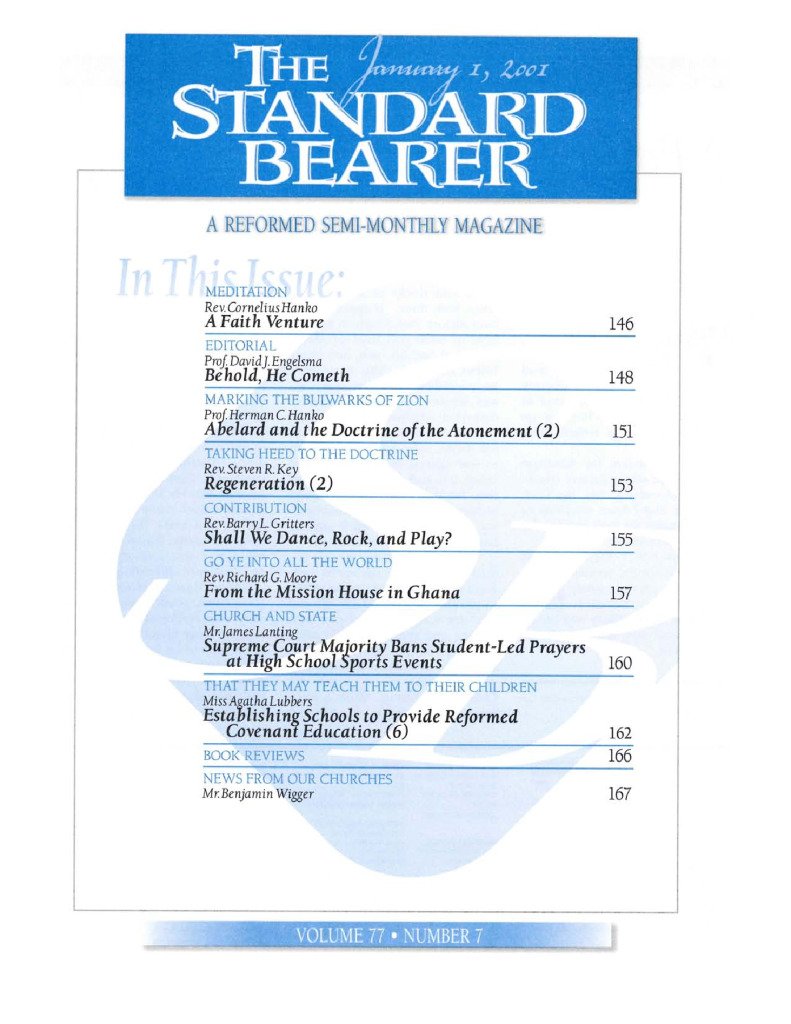