A Timely Question about “Preterism”

A Timely Question about “Preterism”

A reader has asked about “preterism.” The question is occasioned by the series of editorials defending (Reformed) amillennialism (Standard Bearer, Jan. 15, 1995 – Dec. 15, 1996). The subject is worthy of editorial treatment.

I have read your articles on amillennialism and have learned much. I have some dealings with people who hold to a postmillennial view. Lately, some people have come to our church who hold to a preterist view. Do you know much about this view? Do you know what good books or articles I could read? They deny the second coming of Christ and many other important truths. I hope that you can help me.

Your question is timely.

“Preterism” is a heresy that, astonishingly, is creeping into Reformed and Presbyterian churches. That it does so is largely due to postmillennial Christian Reconstructionism. Against this error I was fighting in the series of editorials that occasioned your question.

Your question is also timely because preterism is about time, specifically the time of Jesus’ second coming, the resurrection of the dead, the final judgment, and the renewal of the creation.

Preterism holds that the time of Jesus’ second coming (Greek: parousia) was A.D. 70. The second coming of Jesus was the destruction of Jerusalem in that year. Preterism holds that the second coming of Christ promised in Scripture was exclusively the destruction of Jerusalem in A.D. 70. A.D. 70 was the end of the ages prophesied by Scripture. Christ came then; the dead were raised then; the final judgment took place then; creation was renewed then.

To expect a visible, bodily coming of Jesus, a resurrection of the dead, a final judgment, and a cataclysmic destruction of the present creation in the future on the basis of any prophecy of Scripture is mistaken. All is past.

Hence, “preterism.” The term itself derives from a Latin word meaning ‘past.’

Basic to the heresy is its interpretation of Matthew 24 as referring exclusively to the destruction of Jerusalem in A.D. 70. The preterist insists that verse 34 is decisive for this interpretation: “This generation shall not pass, till all these things be fulfilled.”

Preterism also makes much of the fact that Scripture teaches that Jesus’ coming is “near,” or “at hand.” Explaining this “nearness” in terms of a very brief period of time according to man’s standards, preterism concludes that the New Testament predicted the coming of Christ within 40 years at the most. This prediction was fulfilled in A.D. 70. It was completely and exhaustively fulfilled in A.D. 70.

A recent book promoting preterism is The Promise of His Coming: Interpreting New Testament Statements concerning the Time of Christ’s Appearance (Chicago: Laudemont Press, 1996), by R. C. Leonard and J. E. Leonard. The book contends that all the eschatological prophecies of Scripture have been fulfilled in the past, in A.D. 70.

Since the coming of Christ, as predicted in the New Testament documents, has already taken place, little scriptural basis exists for perpetuating the doctrine that it still lies in the future (p. 216).

We have presented the evidence that the destruction of Jerusalem in AD 70 represents the fulfillment of what the apostolic church knew as the promise of Jesus’ coming and the end of the age. The future hope of today’s church, therefore, lies in another direction… (p. 219).

For today’s Christians, the last days to which the New Testament refers lie in the past. Our task is not to anticipate the end, but to live in the new community inaugurated by Jesus Christ (p. 220).

Present-day preterism, including the teaching of the Leonards, draws heavily from a book by the 19th century Congregational writer, James Stuart Russell. The book is The Parousia: a Critical Inquiry into the New Testament Doctrine of Our Lord’s Second Coming. A new edition of this work, first published in 1878, was published in 1996 by Kingdom Publications in Bradford, PA. The references that follow use this recent edition.

According to Russell, the second coming of Christ that is foretold in I Thessalonians 4:13-17 and in II Thessalonians 1 and 2 happened in A.D. 70 in the destruction of Jerusalem (pp. 165-190). The resurrection of the dead promised in I Corinthians 15 happened in A.D. 70 in the destruction of Jerusalem (pp. 199ff.). The public, final judgment of Matthew 25:31-46 is not the future, “final judgment of the whole human race, but that of the guilty nation … of Palestine … whose day of doom was now near at hand” (p. 108). The renewal of creation described in Romans 8:19-22 is not a coming deliverance of the “irrational and inanimate creation,” but the liberation of groaning, “suffering and down-trodden humanity” when “the whole visible fabric and frame of Judaism were swept away” in the destruction of Jerusalem in A.D. 70 (pp. 222-232).

The entire book of Revelation, with the embarrassing exception of the millennium of chapter 20, found its complete fulfillment in the destruction of Jerusalem (pp. 362ff.).

Russell’s preterism is consistent. Every prophecy of Scripture about the coming of Christ and the end of the world was fulfilled in the destruction of Jerusalem in A.D. 70.

We are compelled … to conclude that the Parousia, or second coming of Christ, with its connected and concomitant events, did take place, according to the Saviour’s own prediction, at the period when Jerusalem was destroyed, and before the passing away of “that generation” (p. 549).

As this quotation indicates (“according to the Saviour’s own prediction”; “passing away of ‘that generation'”), Russell’s interpretation of New Testament eschatology is squarely based on his explanation of Matthew 24 as referring exclusively to the destruction of Jerusalem in A.D. 70. Russell affirms that the language of Matthew 24 (and 25) “is not only appropriate as applied to the destruction of Jerusalem, but that this is its true and exclusive application” (p. 82).

It is gross denial of the second coming of Christ and, with it, the resurrection of the dead, the final judgment, and the renewal of the creation of the heaven and the earth.

No one can possibly fail to detect the false doctrine.

Preterism destroys the Christian hope: the soon-coming of Jesus Christ our Lord in the body to raise our bodies from the dead and to take us unto Himself in the perfected fellowship of the covenant. With the scoffers of II Peter 3:4, it asks, “Where is the promise of his coming?” With Hymenaeus and Philetus, it says that “the resurrection is past already” (II Tim. 2:18).

It is rejection of the Christian hope with a vengeance. Nothing of our hope is left.

Russell admits as much. Having annihilated the expectation of Christ’s coming on the part of the church and the Christian, he imagines his readers asking, “Whither are we tending? What is to be the end and consummation of human history?” Indeed! What are our prospects? What were the prospects of the believers and their children after A.D. 70?

And, “Where nothing has been revealed it would be the height of presumption to prognosticate the future” (p. 550).

God’s Word leaves us completely in the dark as regards the future.

The church and the believer are hopeless. Since we are saved by hope, according to Romans 8:24, preterism strips us of salvation.

The Preterism of Christian Reconstruction

The new edition of Russell’s The Parousia features glowing recommendations of the book by Gary DeMar and Kenneth L. Gentry, Jr. DeMar writes: “Russell’s Parousia takes the Bible seriously when it tells us of the nearness of Christ’s return…. Reading Russell is a breath of fresh air in a room filled with smoke and mirror hermeneutics.” Although not agreeing with all of Russell’s conclusions, Gentry praises the book highly and confesses his own dependence on it:

I highly recommend this well-organized, carefully argued, and compellingly written defense of preterism to serious and mature students of the Bible. It is one of the most persuasive and challenging books I have read on the subject of eschatology and has had a great impact on my own thinking.

DeMar and Gentry are mainstream champions of Christian Reconstruction.

Also, the Leonards, consistent preterists, appeal to Christian Reconstructionist David Chilton in support of their consignment of the whole of the book of Revelation to the past (The Promise, p. 156).

In addition, the reading of Russell’s The Parousia brings to light the dependence of the Christian Reconstructionists on Russell for their interpretation of such passages as II Thessalonians 2 and the entire book of Revelation.

As for the protest by Christian Reconstruction that it wants to retain the hope of a future coming of Christ and a future resurrection of the dead on the basis of a few New Testament prophecies that still apply to the church today, that is, that it wants to hold an “inconsistent preterism,” three things make this impossible.

First, Christian Reconstruction teaches that Matthew 24:1-35 applies exclusively to the destruction of Jerusalem, not at all to the coming of Christ in the future. Such is the basic importance of the prophecy of Matthew on the reckoning of everyone that if Jesus’ eschatology has only the destruction of Jerusalem in view the same is true of all the eschatology of the New Testament. Matthew 24 is the issue. The interpretation of Matthew 24 is the difference between the hope of the Christian faith and the hopelessness of preterism. The four articles in which I examined, criticized, and refuted J. Marcellus Kik’s preterist interpretation of Matthew 24 and then set forth the right explanation of the passage were the heart of the series of editorials, “A (Reformed) Defense of Amillennialism” (SB, April 1, April 15, May 1, and May 15, 1996).

Second, Christian Reconstruction insists on explaining the New Testament’s teaching that the coming of Christ is “near” and “at hand” as meaning that Christ would come in the second coming within a few years, that is, in the destruction of Jerusalem in A.D. 70. If this is, in fact, what is meant by “near,” “at hand,” and “quickly,” Christ came in A.D. 70, and everything connected with His coming, e.g., the resurrection, took place at that time in the past. Scripture’s prophecy of the end has been fulfilled. It has been fulfilled completely. It has been fulfilled completely in the destruction of Jerusalem. There is no further revelation of any future coming.

When the Leonards—consistent preterists—get around to telling us why they have shoved all of New Testament eschatology into the past, thus annihilating the expectation of Christ’s coming, this is what they say:

(This) provides the incentive for the church militant, the followers of Jesus Christ engaging the distortions and inequities of a godless culture, and laying the foundation for the continual reconstruction of society according to the principles of God’s covenant law. Christians have no biblical warrant for withdrawing from this struggle in the hope that Christ will appear, sooner or later, to execute the sanctions of the end. The last days have come and gone, leaving the church on earth where Christ intended it to be (The Promise, p. 208).

The carnal kingdom of “Jewish dreams”!

Christian Reconstruction is committed, willy-nilly, to the full-blown, consistent preterism that strips the church and the Christian of all hope and all salvation.

The gospel of hope is Reformed, amillennial, biblical eschatology. 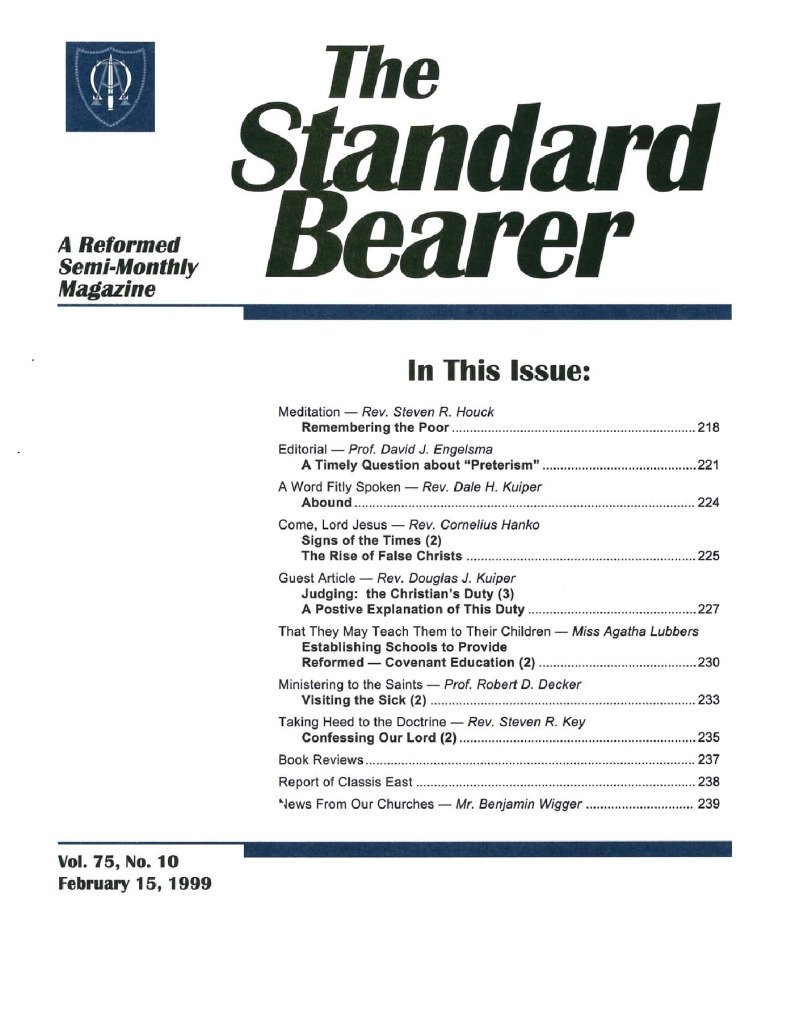