A Strong Protest Against the N.C.C.C.

A Strong Protest Against the N.C.C.C.

From a friend and brother we received a pamphlet entitled: The National Council of Churches —A Menace To Church And State, for which we are deeply grateful. We have read much in recent years concerning this organization of a deprecating nature, but never anything so succinct, enlightening and thought-provoking as the pamphlet above mentioned. If our readers would desire a copy, they may address their request, including 20¢; to: The Southern Presbyterian Journal, Weaverville, N.C. If you really want to know what is wrong with the National Council of Churches of Christ, this pamphlet will tell you.

According to the pamphlet, the Southern Presbyterian Church is a member of the National Council, but the Journal which speaks for the Church rises in vigorous protest against some of the most recent pronouncements of the Council, warning the constituency against the pitfalls into which the Council is leading the churches.

Late last year in a meeting of the Council held in Cleveland, it was decided to request our government and the Nato nations to recognize Communist China. This political maneuver not only aroused the ire of men like Dan Poling and Norman V. Peale, but it also stirred the S. P. Journal to produce the pamphlet above mentioned. The Journal believes that the N.C.C.C. is attempting to fast remove the age-old distinction between Church and State. It is with this fact that the N.C.C.C. is a menace to Church and State that the pamphlet is mostly concerned.

To be sure, the pamphlet is also concerned that “the National Council is seductively and aggressively using the Churches to promote pacifism, socialism, and to give aid and comfort to the Communists.” This is clear, the pamphlet points out, from a brief summary of the “Message” which the Council sent out December last which advocated the following:

“Diplomatic recognition by the United States of Red China.

“Admission of Red China to the United Nations.

“Co-existence with the Communist nations.’

“Avoidance of ‘the posture of general hostility’ to ‘the Communist nations.’

“A call to ‘fellow churchmen to work to overcome segregation in all areas, beginning with their own congregation and including housing, public services and economic or occupational opportunities.”

“Ratification of the genocide convention.

” ‘Disarmament by multilateral agreement? with ‘the goal of universal disarmament.’

“The use of military force only when ‘sanctioned by and under the control of the United Nations.’

“Abolition of ‘the system of military conscription’ and of the Selective Service System.

“Opposition to ‘the concept of nuclear retaliation or preventive war.’

“Extension of trade and travel without restrictions between the United States and Communist countries.”

The authors of the pamphlet add here: “This could not have more nearly conformed to the Communist ‘line,’ if it had originated in the Kremlin.”

But to return to the main theme of the pamphlet, namely, the Menace to Church and State, the pamphlet proceeds to point out wherein that menace consists.

It does so first of all by informing the reader that “there are three leading concepts of the relationship of Church and State” and pointing out what is wrong with two of them, while emphasizing the only correct position we are to take.

The three leading concepts are the following:

“The Roman Catholic concept is that the civil government is a part of and therefore subordinate to the Church. For this reason the Church of Rome seeks to influence and control governments in the name of the Church. These activities may be open or they may be carried on in secret. Where Rome exercises free power within governments Christian freedoms are suppressed. One has but to look at Colombia, Spain and other Catholic-dominated countries to realize that where free to do so the church persecutes and oppresses. For that reason thinking Americans view with genuine alarm the possible election of a Roman Catholic as President of the United States. No matter how loyal a citizen he may be, no matter how able and dedicated he may be to the highest good for America, if he is a loyal Catholic he is part of a system which is the very antithesis of the basic ideals on which our country was founded.

“The second concept of Church-State relationships was first made popular by Erastus, a physician in Heidelberg in the sixteenth century. The Erastian doctrine is the very opposite of that held by the Roman Catholic Church. He taught that the Church is only a phase of the State. The State being a divine institution was therefore responsible for both the spiritual and temporal welfare of the people. Out of this doctrine there came the State Church, a church supported by and obligated to look to the State for the maintenance of doctrine, the proper administration of the sacraments, and of discipline. Here church officers are appointed by the State and are in a measure responsible to the State.

“The Reformed or Protestant doctrine of the Church is that both the State and the Church are divine institutions but that their objectives and functions are in every way different and independent the one of the other. The State is temporal in its administration, designed for the temporal welfare of its citizens. The Church is a spiritual organization designed to witness to the saving and keeping power of the Lord Jesus Christ, to administer the ordinances and maintain the discipline of the Church and to constitute a visible witness of a redeemed citizenry, one in but not of this world; men and women separated unto righteousness who should live in the world as shining lights.

“This view of the Church emphasizes the spiritual nature of her calling and looks to believers to be true ‘salt’ and ‘light’ in the society of which they are a part.

“This view requires that the influence of the Church shall be exercised by Christians, as citizens of their country, and rejects the idea that the Church, in the name of the Church, should seek to exercise political controls or pressures on the State.”

The pamphlet further produces a reproduction of one of the articles of the Church Order, which I presume is that of the Southern Presbyterian Church, which clearly coincides with the Reformed and Protestant doctrine of the Church.

“Synods and councils are to handle or conclude nothing but that which is ecclesiastical: and are not to intermeddle with civil affairs which concern the commonwealth unless by way of humble petition in cases extraordinary ; or by way of advice for satisfaction of conscience, if they be thereunto required by the civil magistrate.”

It is against the violation of this principle of the Church Order of which the N.C.C.C. has made itself guilty, that the pamphlet protests.

Write the authors of the pamphlet: “The conference in Cleveland is typical of the multiplied top-level meetings sponsored by the National Council in which carefully prepared programs are developed beforehand by some of the ablest men in the ecclesiastical world, men who are irrevocably committed to a particular philosophy of the Church, social action, and world affairs. This philosophy envisions the Church, as such, exercising political pressures on the government by which, in a very real sense, the government becomes the agent of the Church. To many of us this is a fatal concept, one which abdicates the high spiritual nature of the Church, and substitutes for it a secular and materialistic role for which there is no scriptural basis.”

The pamphlet points out that the Council is not interested in promoting the truth of Scripture so that its doctrines are developed and the truth disseminated. Rather its chief concern is making political resolutions and persuading governments to act according to its pronouncements. This, the pamphlet contends, is the destruction of the principles for which both governments and churches stand. It is the evil attempt to erase the distinction between Church and State. And history has proved again and again that where this .attempt is realized there is bound to be trouble.

The positive character of the material in the pamphlet may be summed up in the following paragraph:

“The Witnessing mission of the Church should ever be foremost. ‘Ye are my witnesses’— ‘This Gospel shall be preached for a witness to all nations,’ express the primary work of the Church. Once assume that it is the Church which is to conquer the world and the next step of assuming and conniving for worldly power is inevitable. It is this utterly un-Protestant Philosophy of the Church which has led some to say: ‘When the General Assembly takes action God has spoken.’ Recognizing such a danger the Westminster divines inserted in the Confession of Faith this clear restriction: ‘God alone is the Lord of the conscience, and hath left it free from doctrines and commandments of men which are in anything contrary to His word, or beside it in matters of worship’ (Chapt. 22, 11).”

It is in connection with the truth set forth in the above paragraph that the writers of the pamphlet make this significant statement:

“Wherever the Church has arrogated to itself temporal powers there is also the tendency to usurp the headship of Christ. It should be remembered at all times that the Church is the body and that Christ is the Head. It is Christ who will eventually conquer, not the Church. It is to Him that every knee will bow, not to the Church. The latter is the Bride, not the Bridegroom.”

The above statement is of practical value for the church institute when, as so often is the case, she is asked to decide on matters that are not of an ecclesiastical nature. And how true it is that when the church is required to be on business for the King, she makes it her own business.

We believe that the pamphlet was well written. It hit the nail on the head. And it will certainly have its repercussions in those churches which are members of the Council.

It is gratifying to observe that in the nominal church which is fast becoming the tool of Antichrist, there are those who have the boldness to shoot their arrows of criticism at the Beast. 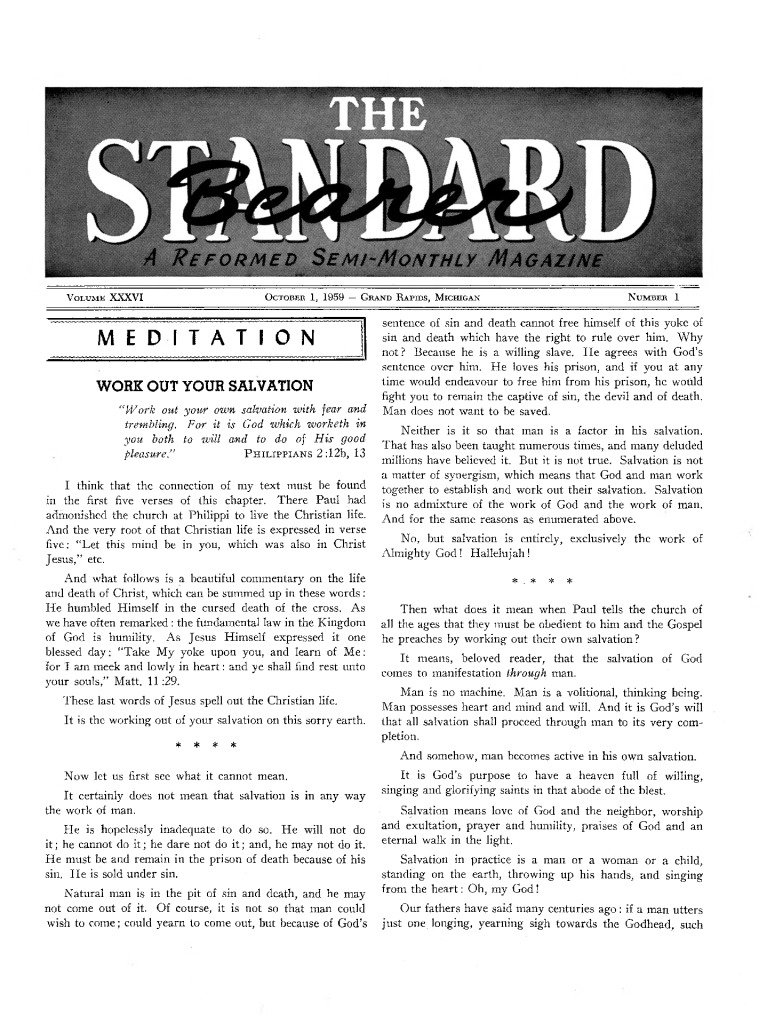