A Shining City on a Hill

A Shining City on a Hill

I suppose that it would be best if we had a description of those two cities before our eyes. It is really not all that difficult to describe them. And it is not because those two cities are; so very much different from each other. So different are they from each other that there really, except for one detail, is nothing similar about them at all. But even with respect to that one detail we must with the eye of faith see that the similarity is really a false similarity, a very deceptive similarity. What is that false, deceptive similarity? It is this. Both cities appear to be very shining cities ‘built on their own hill. Both cities constructed on their hills seem to shine forth with a great radiance. Both cities appear very glorious and brilliant to behold. And because they do, both cities seem to provide a ray of hope for the citizens of those cities. But the simple fact of the matter is that the shining, radiating, glorious brilliance of the one city is not shining, radiating, glorious brilliance! And, therefore, the ray of hope which that city seems to provide its citizens is no ray of hope at all! But on the contrary it is a ray of despair. It is a ray of sorrow. It is a ray of certain and sure destruction.

And why is it that? It is that because that one city which only appears to be a shining city on a hill is filled with corruption. Corruption and sin fill its streets to overflowing. The lust of the flesh and the lust of the eyes and the pride of life are the passwords for entrance into that city, and the motto by which that city lives. And, too, inseparably connected with that is this, that in that city the citizens of the city live for the honor and glory of man. They worship, man! They fall down, before man! They praise almighty man! Man in that city sets himself up to be somebody. Man’s word is: I am strong. I am powerful. I am the author and finisher of my destiny; By me kings reign or do not reign. By me nations are conquered or are not conquered. It is all because of me and my strength and my might and for my honor and glory.

But what about that other city? As I said above, that city is so very different. This city in distinction from the other one is in all its reality a shining city on a hill. It does shine! It is all-glorious. It does radiate forth with awesome brilliance. And because it does, it does indeed provide the citizens of that city with a ray of hope, not only, but with hope itself. And, it does exactly because of the fact that God, the almighty God of heaven and earth, is in the midst of her. The glorious God of infinite virtues and perfections is in the midst of her. God’s glory as it radiates forth from Him fills the city, all the highways and byways of that city, all the homes of that city, and all the citizens of that city. On the throne of that city sits that all glorious God with Christ Jesus, His only begotten Son, to Whom all glory, might, and honor has been bestowed. And the citizens of that city? They, with the hope of the glory of God within them, do not serve sin. They do not live for the pleasures of sin for a season. Their motto is not the lust of the flesh, the lust of the eyes, and the pride of life. But on the contrary they live for and their motto is the glory of God! For God’s glory they live. For God’s praise they live. For the worship and service of their all-glorious God they live and move and have their being. That is a description of those two cities.

Now then, if we with the eye of faith look back at all that has happened in the history of the world, we can see those two shining cities on a hill. That one so-called shining city on a hill came to manifestation already at the time of the Tower of Babel. Once again it came to manifestation at the time of the great King Nebuchadnezzar with his vast empire. Again it came to manifestation in the Persian, Greek, and Roman kingdoms. Especially did it come to manifestation in the Roman kingdom! Rome to all the civilized world of its day was a shining city on a hill. Rome appeared all-glorious, brilliant, and wonderful to behold, providing a ray of hope for all the citizens of its city and kingdom. But Rome was not shining. Rome was not brilliant and wonderful to behold, because Rome was corrupt. It lived for itself, its own glory and its own lusts.

But there is the past. Now let us look to the future. We know from the testimony of Scripture that the so-called shining city on a hill will come to manifestation again. And when it does, it will appear more shining and more brilliant and more all-glorious than even before. But, once again, the clear testimony of Scripture is that when it does come to manifestation, as it most surely will, its shining, as was the case in the past, will be no shining!. Its brilliance will be no brilliance! Its glory will be no glory! And it will not be because, as was the case in the past so will it be the case in the future, it lives for man, for man’s honor and glory, and for the sinful lusts and pleasures of man.

Do you see that so-called shining city on a hill? I do! And when I say that I do, I do not mean that I see it in the future. But I mean that I see it right now! “Well,” you say, “That is absurd. To be sure Scripture says that, it will come to manifestation in the future, but the time of its manifestation is not yet.” My response to that is that I am not being absurd when I say that I see that so-called shining city on a hill right now. Let me explain. On January the twentieth a new president will be installed into office as President of the United States. Maybe some of you who are reading this article voted for him. It really does not matter. But if you did, you must have been struck by a slogan which that man used repeatedly during, his campaign for office. That slogan was this: “I have a vision of a shining city on a hill”. When I heard that, those words embedded themselves in my memory. I started thinking about those words. I asked myself: Of what kind of a shining city on a hill does he have a vision? Is it a city that only appears to be shining, but is not? Is it a city that lives for man’s honor and glory rather than God’s honor and glory? Is it a city which is motivated in all that it does for the advancement of man’s sinful lusts and pleasures rather than the worship and praise of almighty God? Which shining city on a hill is he talking about? When I asked myself that question, the answer to that question became obvious. Obviously, the answer was, not the real and true shining city on a hill, but the false and deceptive shining city on a hill!

This vision of a false and deceptive shining city on a hill is in reality the very same vision of that false and deceptive shining city on a hill that the Apostle John had. If you read the Book of Revelation you will discover that John, under the inspiration of the Spirit, describes that city. And furthermore, he gives to it a name, the name “Babylon”! And that is exactly the name which we as we look to the future with the antithetically clear eye of faith must also give it.

But that, you understand, is not the only vision of a shining city on a hill that John saw, and that we with him see. For we also see that real and true shining city on a hill where God sits enthroned and where we as the people of God dwell. We see, to use John’s words in Revelation 21:2, “the holy city, new Jerusalem, coming down from God out of heaven, prepared as a bride adorned for her husband.” We see, to use John’s words in that very same chapter, verses 10 & 11, “that great city, the holy Jerusalem, descending out of heaven from God, having the glory of God: and her light was like unto a stone most precious.” Indeed we see, to use John’s words but once more in verses 23 & 24 of that chapter, “And the city had no need of the sun, neither of the moon, to shine in it: for the glory of God did lighten it, and the Lamb is the light thereof. And the nations of them which are saved shall walk in the light of it. And the kings of the earth do bring their glory and honor into it.”

That shining city on a hill is what we see. We see it with the antithetically clear eye of faith. And in seeing it we are exceedingly glad! 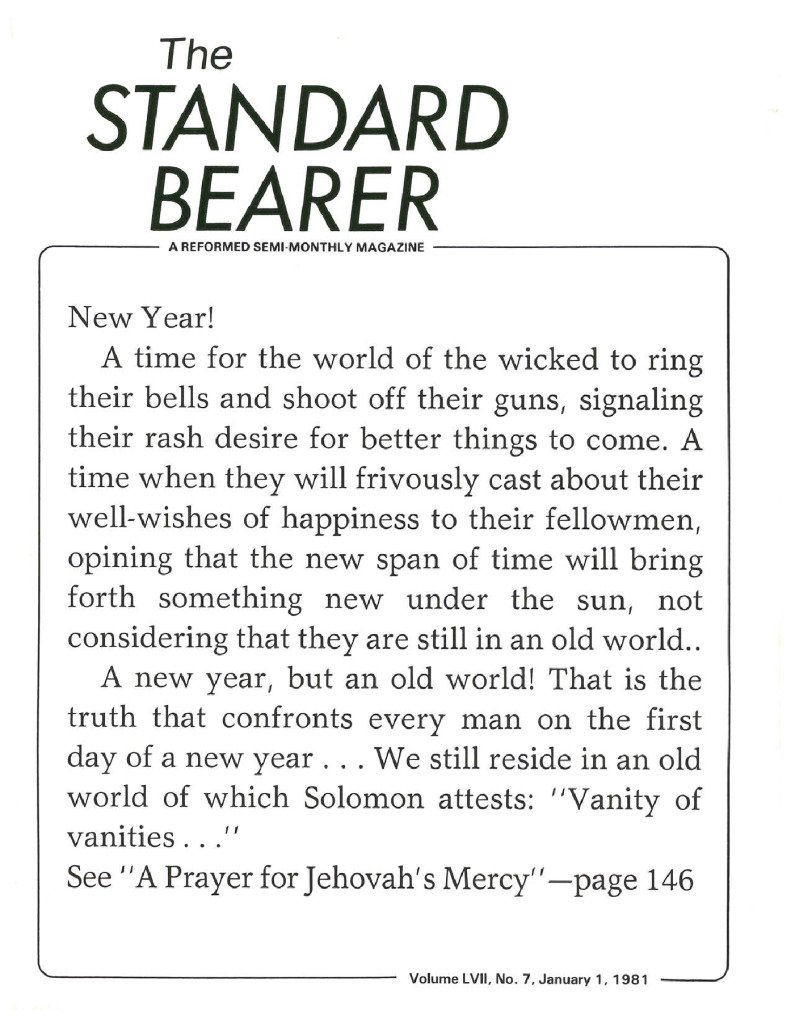