A Shift of Emphasis

A Shift of Emphasis

Quite suddenly we moved from the “Atomic Age” to the “Space Age.” So quickly does time fly. So quickly are we speeding toward the end of the ages.

Looking at the matter from another point of view, observing the change in family life and the social structure someone once said, “We are in the shift age. Father works the night shift. Mother works the day shift. And the children shift for themselves.” And therein we do see a shift in emphasis.

What we have in mind is a shift from the spiritual to the material. We need both. As earthly creatures, created out of the dust of the ground, depending upon that which grows in the dust of the earth for our very life, we must seek the material. We need food, clothing and shelter. There can be no denying of that. And Scripture rebukes us if we are not diligent in seeking the things of this earth. Solomon tells the sluggard to go to the ant and be wise. Paul tells the Thessalonians that “If any would not work neither should he eat.” II Thessalonians 3:10. And that man who is spiritual will be zealous also as far as his physical, natural needs are concerned.

But when the emphasis is upon the material rather than upon the spiritual we are not walking in His fear, but in sin. When we seek the material as an end in itself, when we seek earthly things only because we want earthly things, we walk contrary to the fear of the Lord.Matthew 6:33 teaches us, “But seek ye first the kingdom of God and its righteousness; and all these things (the material that we need in order to seek the kingdom) will be added to you.” Certainly when we twist this around and live from the principle, “Seek ye first the earthly; and all these things of God’s kingdom will be added unto you” we not only commit great folly, but we walk in wickedness. Does John not coufise1 us? “Love not the world, neither the things in the world.” And then he explains what these things in the world actually are (in spite of what nice names we may give to them) when he calls them the lust of the flesh, the lust of the eyes and the pride of life. I John 2:15, 16. And while father works the night shift, mother works the day shift, and the children shift for themselves, the dollar, pleasures of the flesh, and ambitions of the evil nature are worshiped; and the covenant seed is neglected, is trained to walk out of His fear, walks with mother and father in a materialistic way, and travels arm in arm with the world.

Of course, a shift of emphasis such as this is found only in the church. And that is what makes it so tragic, You cannot speak of a shift of emphasis, and therefore you cannot speak of a shift of emphasis in the world. The unbeliever seeks only the material. He never shifts from the material to the spiritual, and he never shifts back from the spiritual to the material. And this is true exactly because he is spiritually dead. He is not spiritually weak, sick, or paralyzed. He is spiritually dead. That is why Jesus says that we have to be born again. A sick man needs healing to be able to resume his work. A weak man needs a new supply of strength, and the paralyzed needs a new surge of power in his nerves and muscles in order to work again. But a dead man needs new life. It is not a case of working upon the old life to restore some of its activities. It is a case of receiving life itself.

The apostle Paul points out this spiritual death of the natural man when he tells the Ephesians that God hath quickened them, who were dead in trespasses and sins. They were not physically dead. They were dead in trespasses and sins. Ephesians 2:1. And that they are quickened, that is, made alive, underscores the fact that the natural man is incapable of doing anything that is spiritually good, though he is physically alive. Paul gives another very clear description of this spiritually dead man in Romans 3:10-18 when he quotes from the Psalms and points out what spiritual activity the natural man performs. And it is because of this awful condition that Jesus remarks that a man must be born again tosee the kingdom. John 3:3. That he cannot even see the kingdom then is not due to blindness. If that were the case Jesus could have and would have said that man needed healing to see. Now He says deliberately that he must be born again, because, being spiritually dead, he needs life. Nothing short of new spiritual life will enable him even to see that there is such a kingdom.

But we are speaking of those in the church where rebirth has taken place. We are speaking of those who are able to seek and have been seeking the things of God’s kingdom because they have been made spiritually alive. We are at least speaking of the sphere where such seeking has been conducted and where you expect works in the fear of God’s name. Many covenant parents are shifting the emphasis from the spiritual to the material and are drifting into gross worldliness.

Indeed, the pressures of the day are here. The high cost of Christian instruction makes it almost mandatory that mother go out on the day shift and that father take a higher paying night shift to make ends meet. We are being sorely tried to give up Christian instruction for our children because of the tremendous cost of obtaining it. But we do not label such work on the part of both parents as a shift of the emphasis to the material when in all sincerity the labour is sought and performed solely in order to provide Christian education for the children, and when father and mother make full use of every moment still available to train their children, and when it is not a case of trying to raise this school tuition while still seeking to prosper materially and to get ahead with the pleasures and treasures of the world.

With the emphasis upon the spiritual the child of God is willing to sacrifice and go without luxuries and many conveniences. Paul tells the Philippians that he counts all things but loss for the excellency of the knowledge of Christ Jesus his Lord. Moses gave up all the treasures of Egypt to walk in God’s fear and to be able to seek the spiritual. And when parents will not sacrifice a few conveniences and luxuries in order to be able to provide a Christian education for their children in His fear and find it therefore necessary to work the night shift and day shift and let the children shift for themselves in their training and Christian education, it is a shift of emphasis from the spiritual to the material, even though these children are sent to a Christian school for their formal education.

Have you not gone through that experience? Yes, you are both on the day shift, and mother is home when the children leave in the morning and back home before the children return from school. And father, though he has put in a few extra hours at overtime pay, still is home with the children at night (If indeed the baseball, softball team, the bowling team, the fishing fever, the speedboat cruise and the like do not receive the emphasis and preference for his time). But the work of the day has wearied us to the point where we are irritable and out of sorts to do any training of the children except into irritability and into shifting the emphasis from the spiritual to the material. It is quite easy to teach the children that last things come first and first things come last, because that is exactly their own philosophy. This is a lesson they like to learn. They will be eager, attentive students in that classroom.

What is the cause of all this? First of all is the fact that after our rebirth we still have the old nature. It will not enter the new Jerusalem. There all the emphasis will always be on the spiritual, and we will fully be dedicated and consecrated to the glory of God. But now we still have the flesh to molest and trouble us. The rebirth does not do away with the first birth. At the rebirth something is added to us, but the old is not subtracted by that rebirth. Only God by the cold hand of death makes this separation and frees the soul of all that carnality.

And because we have this old nature Satan can tempt us, put pressure upon us, and draw us from the spiritual to the material, from seeking the kingdom of light and unto seeking the kingdom of darkness, from a walk in His fear to a walk void of His fear. If we did not have that old nature he could not cause us to shift from .an upward look to a downward aim. He can dangle dainties before our eyes because we consider them dainties. He can appeal to our lust exactly because we still have our lust for the things of this world.

Not only has he a point of contact with us, but Satan has led the world to a tremendous climax of affluence, to a fantastic pinnacle of materialistic advancement. We have arrived at such a high fulfillment of all the wealth of Babylon as she is pictured in Revelation 18:12ff by Satan’s persistent goading and guiding from paradise till the present moment that we have come to the point where we cannot possibly see how we could live without any of these luxuries and dainties. No one wants to give up any of the conveniences and luxuries of the day. The clamor is for more and more goods, higher and higher wages, shorter and shorter working hours to be able to live, as Paul points out, as lovers of pleasure rather than lovers of God. What a shift of emphasis that is! But that is the point.

And a generation has arisen that starts on the top! Young couples who marry today often must have all at once; and then again husband and wife must both find a shift to work, preferably simultaneous shifts, to maintain that level of affluence. We have a generation that does not know what it means to work themselves up, but rather one that is worried about maintaining itself on the top while broadening out to further conquest of the world.

For spiritual exercises there is little or no time. A worldly minded generation arises that has learned to worship the dollar and ought to hang on its wall, “Seek ye first the dollar and its buying power, and you will have added to you what really counts.” No value is attached to the spiritual, but great value is placed on the things of this life. And instead of trusting in a Saviour Who was called Jesus, “For He shall save His people from their sins” (Matthew 1:21) it becomes the rage of the day to trust in a “Saviour” who will satisfy the materialistic, worldly cravings of those on the bottom of the social pile. That fits in better with the spirit of the age. With a shift of emphasis from the spiritual, the old theology of salvation from sin is left behind and is discarded.

O, that in His fear, father and mother with the children would work the spiritual shift that will be our everlasting lot in the new Jerusalem. 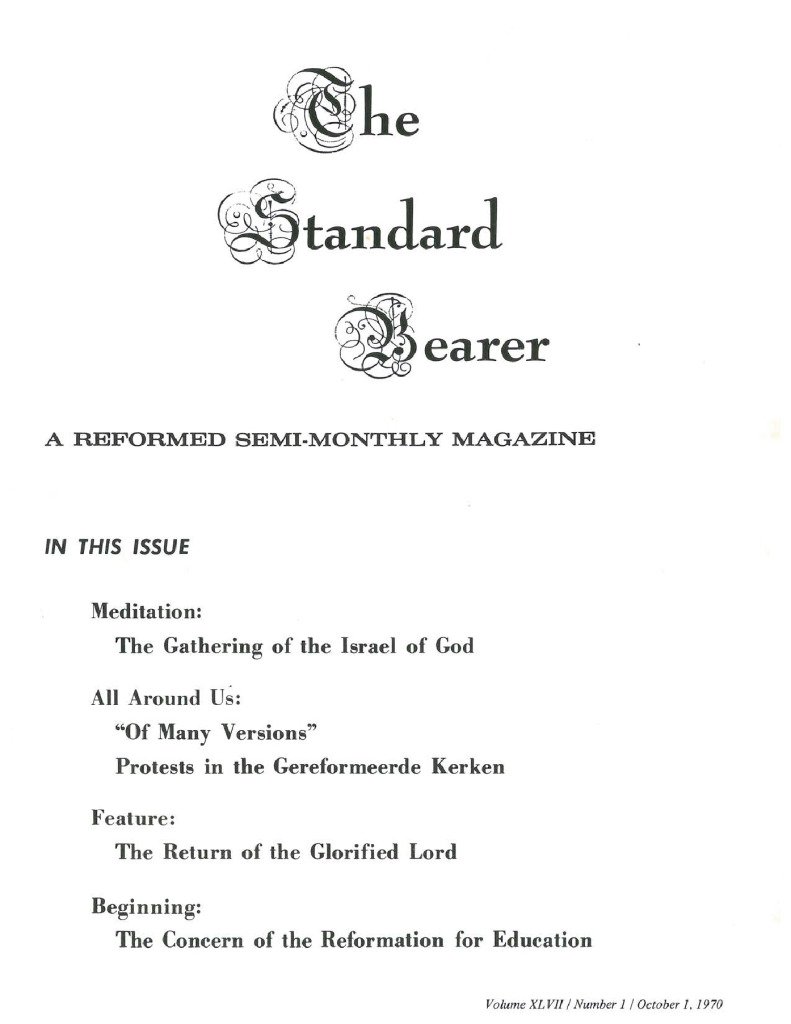