A Report of the Mission Work in Northwest Chicago

A Report of the Mission Work in Northwest Chicago

Greetings in the name of Ebenezer, for Jehovah hath helped us (I Samuel 7:12). In the confidence of Ebenezer do we labor in the cause of the truth and for the establishment of permanent beacons of the brilliant truth of the glory of God and the salvation of sinners.

For already six months the church extension work of the South Holland Protestant Reformed Church in the northwestern suburbs of Chicago has been united with a missionary of the Gospel who can give himself to full-time labors. Prior to that, South Holland Church with the diligent efforts of her pastor had been developing the work unto this goal for almost a year and a half. Five families (with six children) and one individual welcomed the missionary pastor and his family, and have served as the core group. South Holland’s congregation and counsel continue to show strong support by their frequent presence at the worship services and their prayers for God’s blessing upon the work. This support is greatly appreciated, for the distance which separates South Holland and the work in the Northwest suburbs is about 50 miles.

The labors are within three suburbs to the west and north of O’Hare International Airport, the world’s busiest. The missionary’s family, along with three of the families, live on the western side of Elk Grove Village. The two other families live in Des Plaines. And the location of our worship services is in Bensenville. They are held in a rented Episcopalian Church. An earnest and warm welcome is extended to all to visit us and our worship services. We are using St. Bede’s Church, which is located on Highway 83, one mile north of its junction with I-290. Because we are renting we hold our worship services at 2 p.m. and 6 p.m. Lord’s Day mornings are used for two catechism classes, which are held in the missionary pastor’s study.

The six months of labor have served to acquaint the missionary with the field. There has developed a good cooperation between the missionary and the men of the core group, so that the labors are a united effort. Thus the work is not that of one man, nor merely those of the calling and sending church and denominational Mission Committee. This creates the best of situations for the foundation of a potential congregation, if the Lord wills. All involved in the labors of the proclamation of the precious Gospel are very conscious of Ebenezer. Without the blessing of the Lord all human efforts are vain, but by His grace mighty works can be accomplished.

A part of the work is the broadcasting of the radio program, “A Reformed Witness,” on WCFL (1000-AM) (a 50,000 watt, clear channel radio station) on Sunday mornings at 11:45. This proves to be both interesting and difficult work. It is difficult because it is almost impossible to know the listening audience. This makes for a deeper consciousness of dependence upon the Lord and for earnestness in prayers that He will bless His church through these efforts. Efforts have been and are being made to advertise extensively the broadcast, as well as the worship services, in a variety of newspapers. Favorable responses have been received already (some even from Wisconsin), and these are used of the Lord to encourage the continued efforts.

Along with the worship services and the radio work, there are other efforts to extend our witness. A mid-week meeting is held at the church building. This has been a continuation of a study of the great Reformational truths treated in the Canons of Dordrecht. Two other studies have recently begun and are looked at as God-given opportunities to proclaim His truth unto the strengthening and salvation of His people. There is a Ladies’ Bible Study held on Thursday mornings, which serves as an excellent way to bring in neighbors. Also the missionary has been asked to lead an informal, lunch-hour Study of the book of Mark for fifteen to twenty premed students at Loyola School of Medicine. God is to be thanked for providing these opportunities.

For all of the work your prayers are coveted that the glorious Gospel of the Sovereign and Gracious God will be boldly proclaimed, and that His grace will enable the great responsibilities to be met (II Thessalonians 3:1). It is difficult to be patient and zealous at the same time. Pray that the laborers may be patient and remain zealous, waiting for the Lord to bless the seeds which are sown. 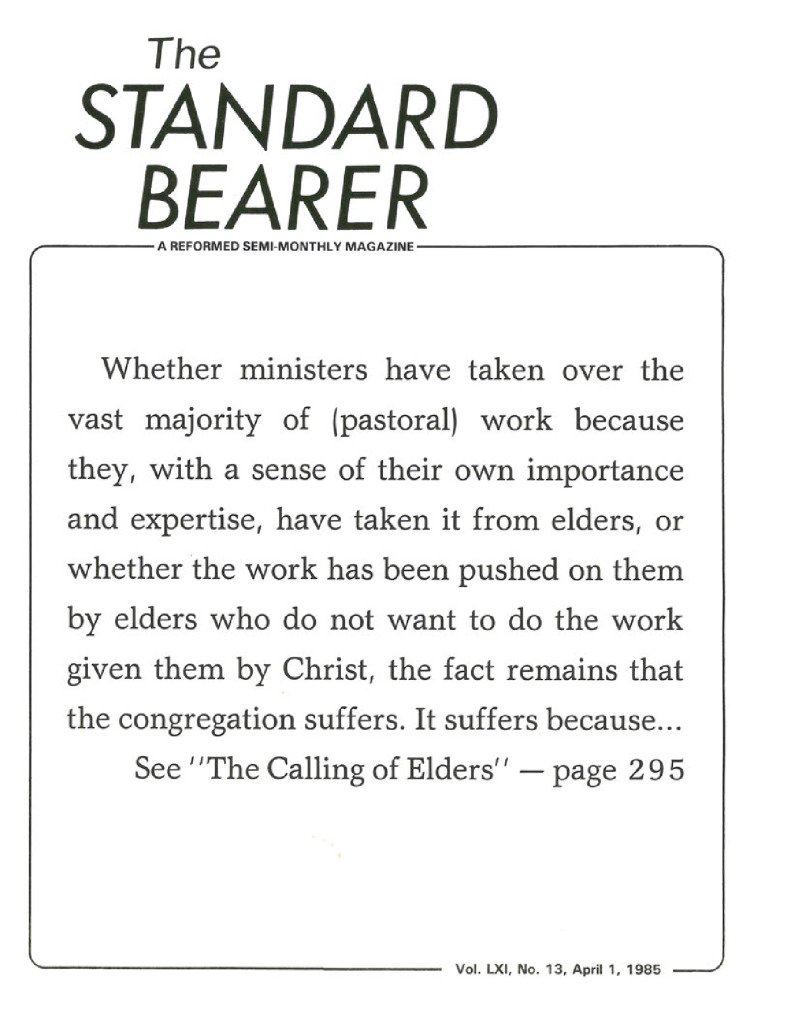