A Reformed Look at the New Age Movement (2)

A Reformed Look at the New Age Movement (2)

Rev. Houck is a home-missionary of the Protestant Reformed Churches.

All the practices of the New Age Movement are based upon their fundamental beliefs. Since man is really God and therefore has infinite potential, he has only to look within himself for the answers to all of his problems. Therefore many of the practices of the New Age Movement emphasize mystical experiences, particularly various forms of Eastern meditation. One must put out of his consciousness the normal things of life that distract him from seeing his true reality. He must bring about a state of consciousness that is identified with “the One.”

Shirley MacLaine describes a mystical experience she had in a hot tub this way, “My whole body seemed to float. Slowly, slowly I became the water . . . I felt the inner connection of my breathing with the pulse of the energy around me. In fact, I was the air, the water, the darkness, the walls, the bubbles, the candle, the wet rocks under the water, and even the sound of the rushing river outside.”

Another practice of the New Age Movement is called, “Imaging.” One must imagine the reality he wants, and by that imagination he will actually create that reality. For instance, if a person has cancer he can cure himself by means of imaging. First he must imagine himself full of cancer cells. Then he must picture his immune system attacking and destroying those cells. He must see his white blood cells eating up the cancer cells until they are all gone. That image of no cancer will then become the reality and he will be free of cancer.

The New Age Movement emphasizes the power of positive thinking and the power of the mind over matter. They practice what is called “psychokinesis” which is the moving or influencing of matter through the power of the mind. This is a popular activity at their parties. They claim that they are able to bend silverware merely by thinking it. They also claim that they can walk on hot coals without burning their feet. They profess to practice such things as telepathy (the transfer of thoughts from one mind to another) and clairvoyance (the seeing of objects or events at a distance).

Besides looking to one’s own mind and consciousness for the answer to man’s basic problem, the New Age Movement looks outside to others. One of the most widespread practices of this movement is something called “channeling.” This is nothing more than the old-fashioned séance in a new and “more acceptable” form. They believe that there are a host of spirit beings—the spirits of the dead, evolved animal spirits, beings from outer space—who inhabit a spiritual realm. These beings have either reached the point of enlightenment or are very close to it and they share information concerning enlightenment with those seeking enlightenment. For this they use a channel who gives himself over to the spirit so that the spirit controls his mind and mouth and thus speaks through him. This is so popular among New Age people that there (are a host of known channelers who are making millions of dollars doing this. There are over a thousand channelers in Los Angeles alone. Even the spirits they channel are popular. They have names like: Lazarus, Mafu, Seth, Saint Germain, Ramtha. Some even claim to channel Jesus. Many of the books which are used by the New Age Movement and which promote the philosophy of the movement are said to be written by these channeled spirits.

The New Age Movement resorts to other forms of spiritism too. Many of them go to the native American Indian medicine man or participate in Indian rituals and ceremonies in. order to get information from the spirit world. Some of them are involved in nature-based religion in which there is the worship of the earth and female gods. They speak of mother earth and of mother goddesses such as Diana, Isis, Demeter, and others. Some are involved in Wicca or witchcraft with its emphasis upon the female. It is estimated that there are fifty thousand witches in the United States.

If you were to go into the home of a New Age practitioner you would discover that there are two objects which are especially important to them. The first of these is the crystal. You will find crystal jewelry around their necks and on their arms and fingers. They put crystals in their purses, in their toilet tanks, and even tie them to the carburetors of their cars. They display them on coffee tables and they grind them up and make from them an energizing elixir which they drink. To understand this you must remember that they believe that God is a force or energy. They want to be in harmony with that world force. They want to vibrate in tune with the universe. Since they believe that rock crystal has the same energy pattern as God, they believe that by surrounding themselves with these crystals their energy will be in harmony with God. Thus they use crystals for psychic healing, contact with spirits, and the development of a higher consciousness of the “One.”

The other object which is found among the New Age people is the pyramid. They believe that the pyramid, like the crystal, has super-powerful paranormal properties. It is an age-old belief that the specific angles of the pyramid emit magnetic energy that can be harnessed to control events.

Perhaps you have heard of “holistic health.” This too is an extension of the basic philosophy of the New Age Movement. Because all is one, the body too must be in tune with the energy of nature and with God. This tuning can be accomplished by using the natural powers of the body itself. While the name holistic is supposed to emphasize the concept of dealing with the whole person, the real emphasis is on the spiritual energy in the body and the use of that energy to heal. It is another form of spiritism. Thus medical practices are used which have their origin in witches, witch doctors, medicine men, sorcerers, wizards, and magicians. Besides using such accepted methods as diet and life style and attitude changes, they use acupuncture, biofeedback, chiropractic therapy, reflexology, iridology (diagnosis by looking at the iris), relaxation, meditation, trance channeling, psychic surgery, hypnosis, and more.

The fundamental error of the New Age Movement is what the apostle refers to in Romans 1:23, 25: “. . . (They) changed the glory of the uncorruptible God in to an image made like to corruptible man, and to birds, and fourfooted beasts, and creeping things . . . and worshipped and served the creature more than the Creator . . . .”

They have taken the incorruptible God and made him man, birds, beasts, and creeping things. They have made the creation, God. Instead of worshiping the true God, they worship creation. At bottom, the New Age Movement is nothing but idolatry.

First of all, God is not an impersonal force, energy, or consciousness. God is a personal God. This can be very easily demonstrated by going to the name of God. His name is Jehovah, which means, “I Am.” God told His name to Moses at the burning bush: “And God said unto Moses, I AM THAT I AM: and he said, thus shalt thou say unto the children of Israel, I AM hath sent me unto you” (Ex. 3:14).

Notice that in this verse God is said to talk to Moses. In fact, at the very beginning of the Bible God is said to speak. He said, “Let there be light.” That in itself demonstrates that God is a personal God. Only a person can speak. But, even beyond that, Gods name, Jehovah, is a personal name. He is the great “I Am.” God is the “I” who eternally is. Only a person can say “I.” Every time the Bible calls God by the name, Jehovah, it declares that He is personal.

We ought to be horrified that anyone would even suggest that God is not a personal God. We have fellowship with God, worship and serve Him, love and enjoy Him, only because He is a personal God. That is what makes God the beautiful, glorious, God that He is.

If we are to understand properly the relationship of God and His creation we must take note of two things: God is both transcendent and immanent.

That God is immanent means that He is not far away from His creation, but very near. He is everywhere in creation. He is intimately involved in all the affairs of this world. He providentially upholds and governs all things—even the small and seemingly insignificant. The apostle says, “. . . He giveth to all life, and breath, and all things; . . . For in him we live, and move, and have our being . . .” (Acts 17:25, 28). We read, “. . . Who worketh all things after the counsel of his own will” (Eph. 1:11). In this sense God is not far from anyone.

Yet God is not the world. That God is transcendent means that He is in Himself infinitely exalted above the world. He is absolutely different from the world. He is so high above this world that nothing can even be compared to Him. He is the infinite God. All else is finite. This is demonstrated by the fact that God’s name is “Most High” (Ps. 47:2). The Psalmist says, “The Lord is high above all nations, and his glory above the heavens” (Ps. 113:4). God is immanent in this world. But He is immanent as the transcendent God. He is near to every one of us. But He is near as the infinite God. He is Creator, Governor, and Redeemer. But He is Creator, Governor, and Redeemer as the Holy God. These are fundamentals of the Reformed Faith.

The Lord willing, in the final article of this series we will continue to evaluate the New Age Movement in the light of the Scriptures and also suggest ways in which we can avoid the wicked errors of this movement. 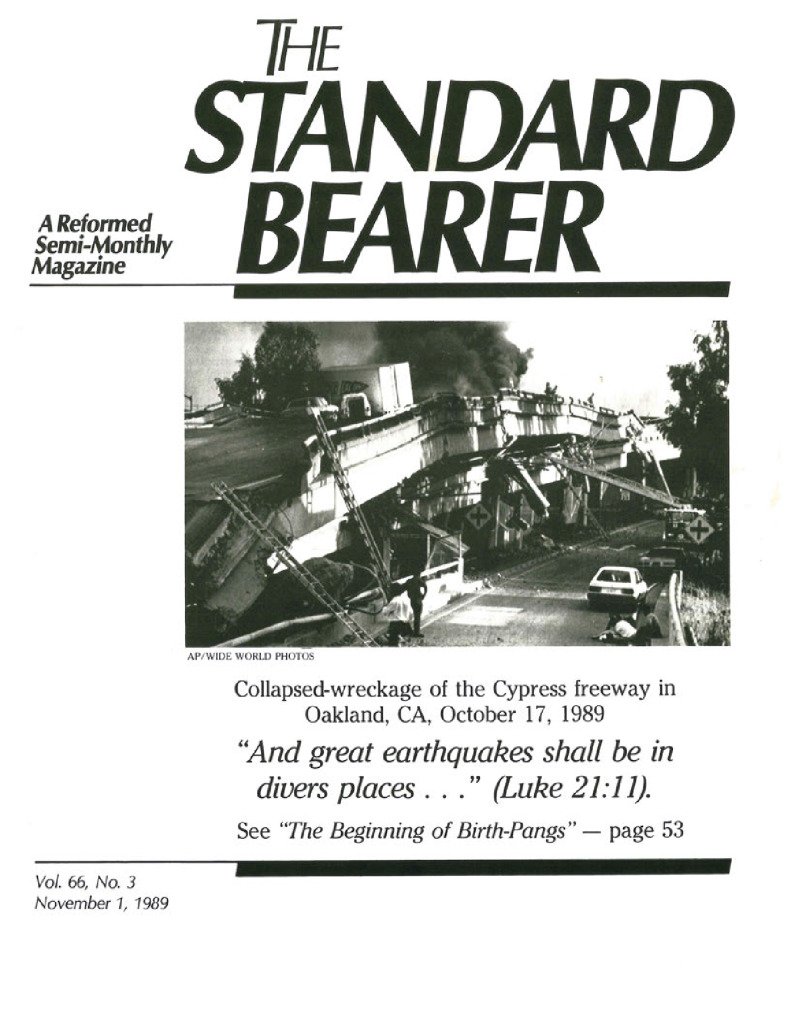