It will be worth our while to examine the religious movement known as Pentecostalism from the viewpoint of the Reformed faith. The Reformed faith is the faith that the Holy Spirit had handed down to us as a glorious heritage through the Protestant Reformation of the 16th century, especially throughJohn Calvin. It is the faith set forth in our Reformed creeds, the Heidelberg Catechism, the Belgic Confession, and the Canons of Dordt.

It is legitimate for us to conduct this examination. It is common for Pentecostals to scare off would-be critics by insinuating that any critic of Pent. is guilty of the unforgivable sin of blasphemy against the Holy Spirit. A Reformed man is-not intimidated by this scare tactic. He knows of many instances in the history of the church when false teachers tried to gain entrance into the Church by crying, “The Spirit, the Spirit.” An outstanding example is the fanatics that arose in Wittenberg at the time of the Reformation to harass the Lutheran Reformation. These were the “heavenly prophets” and “enthusiasts” who claimed special revelations from the Spirit and the power to perform miracles. They cowed Melanchthon, but they did not cow Luther. When they screamed, “The Spirit, the Spirit,” Luther replied, “I slap your spirit on the snout.”

In addition, the Reformed man knows the instruction of the Spirit of Christ in Holy Scripture: “Beloved, believe not every spirit, but try the spirits whether they are of God; because many false prophets are gone out into the world” (I John 4:1).

The standard of the examination of the spirits, including the spirit of Pent., is Holy Scripture, the infallibly inspired, written Word of God. In the light of Scripture, the question must be this: Does this spirit, this religious movement, confess Jesus Christ (I John 4:2, 3); does it abide “in the doctrine of Christ” (II John 9)? For the Holy Spirit confesses Jesus Christ and brings the doctrine of Christ.

Our examination of Pent. should emphasize the Reformed conception of the Christian life. This is important because Pent. sneers at the life of “mere believers. ” The effect of Pent, is that believers wonder whether their life is what it should be, a “normal Christian life.” Believers are even made to doubt whether they are saved Christians at all. In the final analysis, the appeal of Pent. to religious people is Pent.’s boast of a higher, fuller, deeper, richer Christian life. Pent. exults in a life that is all power, all excitement, all joy, all victory.

By Pent., we understand the religious movement that teaches that there is a second, distinct work of grace in the child of God which is referred to as the “baptism with the Holy Spirit.” At some moment after regeneration, the believer receives the Holy Spirit, usually as a marvelous, emotional experience, in such a way that now, for the first time, he has a wonderful feeling of joy, possesses power for dynamic Christian life and service, and enjoys extraordinary gifts of the spirit, especially the gift of tongues speaking. Even though the believer received Christ, the forgiveness of sins, and sanctification before this, not until the baptism with the Spirit lifts him to a much higher spiritual level is he enabled to live the full, real, joyful, powerful Christian life.

It is this doctrine that constitutes the very heart of Pent. Other features of Pent. may attract the attention of the onlooker, e.g., tongues, miracles, and the exuberance of the meetings; but the movement stands or falls with its novel doctrine of salvation—its second baptism, its second work of grace. The fundamental criticism that the Reformed faith makes of this religion is that it is heretical in its doctrine of salvation, its “soteriology.”

The Pentecostals identify this Spirit-baptism with the coming of the Spirit on the 120 believers on the day of Pentecost. Hence, the name of the movement: Pentecostalism.

Since the Spirit is supposed to give extraordinary gifts to those who are so baptized, the movement is also called “the charismatic movement.” In the Greek of the New Testament, the word meaning “gifts” ischarismata (cf. I Cor. 12). The gifts that Pent. makes much of are tongues; interpretation of tongues; prophecy; miracle-working; and the power to cast out devils (exorcism). The main gift is speaking in tongues. Therefore, the movement is sometimes called the “tongues movement.”

Neo-Pentecostalism is the name given to this movement as it develops within the established Protestant churches and within the Roman Catholic Church. There have been Pent. Churches since the early 1900’s—the Assemblies of God is one of the main Pent. denominations. In the early 1960’s, men in the established Protestant Churches began advocating Pent. beliefs and practices within their churches. The leader is generally recognized to be the Episcopalian, Dennis Bennett. This aspect of the movement is called neo-Pent., i.e., new-Pent.

To the utter astonishment of a Reformed saint, Pent. is a large, growing, influential movement. It is regarded as a third force in Christendom, alongside of Rome and Protestantism. Millions the world over embrace the teaching and follow the practices of Pent.

There is hardly a denomination that does not have an active Pent. group within it, including most (but not all—God be praised!) Reformed denominations.

Pent. claims that its doctrine of the baptism with the Holy Spirit as a second work of grace and its teaching of the presence in the Church of the extraordinary gifts of the Spirit are Biblical. It finds inActs 2, as well as in Acts 8, 10, and Acts 19, that there was a distinct reception of the Holy Spirit by believers subsequent to their conversion, a reception of the Spirit that gave the believers great power and that bestowed upon them special gifts. It points us to I Corinthians 12 as proof that the gifts of the Spirit to the New Testament Church include healing, the working of miracles, prophecy, tongues, and the like.

What is the Reformed answer to these appeals to the Bible in support of the Pent. teachings of the baptism with the Spirit and the extraordinary gifts?

There is a baptism with the Holy Spirit. It is an essential part of salvation. John the Baptist so described the saving work of Jesus: “he shall baptize you with the Holy Ghost and with fire” (Matt. 3:11. Cf. also Mark 1:18; Luke 3:16; John 1:33). But it is not a second work of the Spirit subsequent to the work of regeneration and the gift of faith. Nor is it limited to some Christians only, those who have fulfilled certain conditions and thus made themselves worthy of this higher stage of salvation. Christ’s baptism of us with the Spirit is His one, saving work by His Spirit in every elect child of God. It is the work of the Holy Spirit that Scripture calls regeneration, or the new birth from above (John 3:1-8): It is Christ’s cleansing of us from sin and consecration of us to God by the pouring out of the Spirit into our hearts. Of this spiritual reality, John’s baptism with water was a sign. The sacrament of baptism in the Church is a sign of this baptism with the Spirit. This is clearly taught in Titus 3:5, 6: “according to his mercy he saved us, by the washing of regeneration, and renewing of the Holy Ghost; Which he shed on us abundantly through Jesus Christ our Savior.”

There is only one baptism in the Church of Jesus Christ: the baptism with the Holy Spirit signified by the sprinkling with water in the Name of the Triune God. This is Paul’s teaching in Ephesians 4:5: “One Lord, one faith, one baptism.” Pent. has two baptisms: a first, lower baptism—salvation from sin—of which the sign is water; and a second, higher baptism—the baptism with the Holy Spirit. Thus, Pent. divides Christ, salvation, and the Church.

Christ’s baptism of every one of His people with the Holy Spirit depends solely upon His work of meriting this gift for them by His death, not upon works that they must perform. Therefore, every elect child of God not only may receive it and can receive it, butdoes receive it. “He shall baptize you with the Holy Ghost,” John promised.

To be sure, baptism with the Spirit is the reception of great power by every one so baptized, just as Christ instructed His disciples in Acts 1:8: “But ye shall receive power, after that the Holy Ghost is come upon you . . .” But let us allow Scripture to teach us how this great power is exercised. As far as the Church is concerned, the power is exercised by witnessing to Christ (Acts 1:8; Acts 4:33). The mark of a Spirit-baptized Church, therefore, is the faithful proclamation of Christ.

As far as the individual child of God is concerned, the nature of the power of the baptism with the Spirit is indicated by John the Baptist when he says that we are baptized “with the Holy Ghost and fire.” We receive the Spirit as a fire; He dwells and works in usas a fire. Fire purifies by utterly burning away the dross that defiles the precious metal. The Holy Spirit, similarly, bums away our sin, so that we may be consecrated to God in the obedience of love. The power of the Spirit-baptism is the awesome power of sanctification. Such was the prophecy of the baptism with the Spirit in the Old Testament. In the day when the “branch of the LORD” is beautiful and glorious, the remnant of grace “shall be called holy, even every one that is written among the living in Jerusalem: When the Lord shall have washed away the filth of the daughters of Zion, and shall have purged the blood of Jerusalem from the midst thereof by the spirit of judgment, and by the spirit of burning” (Isaiah 4:2-4).

The mark of a Spirit-baptized Christian, therefore, is sorrow over sin (repentance) and obedience to God’s law (holiness).

Have you been born again (and you certainly have, if you believe in Jesus Christ)? Are you sorry for your sinfulness and your sins? Is there a beginning in your life, small as it may be, of obedience to all of the commandments of God’s law? Then, you have been baptized with the Holy Spirit, and the sacrament is a constant sign and seal to you of that baptism. Do not let anyone deceive you, no, not for a moment, that you must look still for another, better baptism. 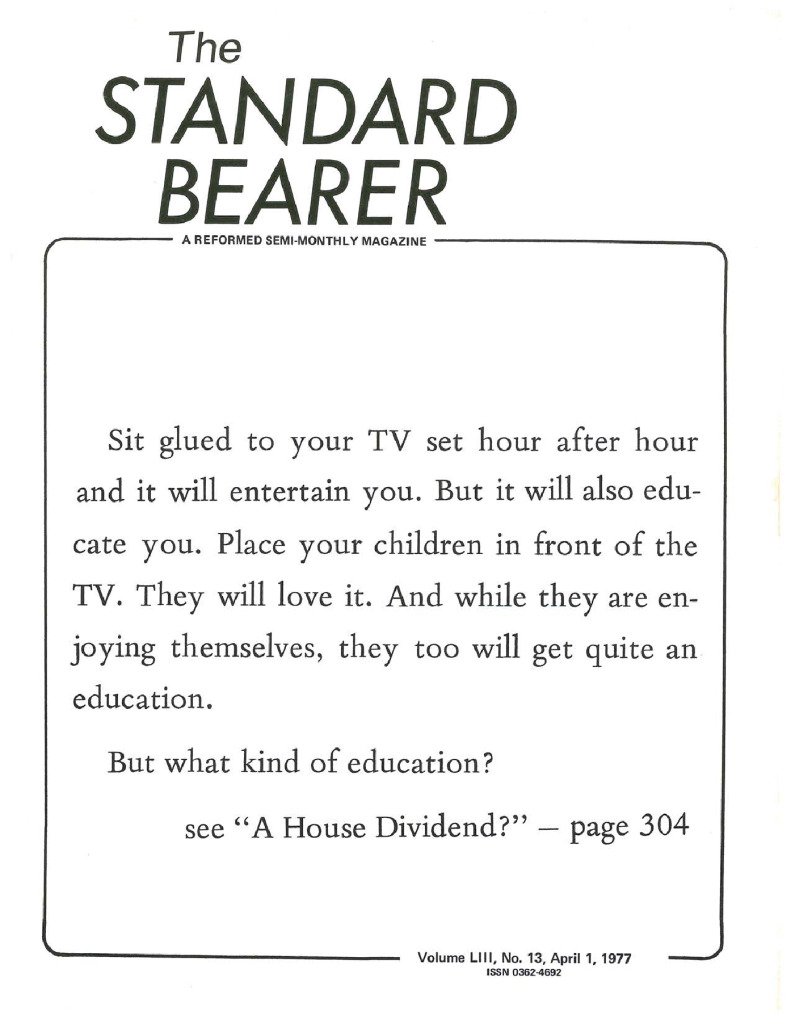