A Problem And A Solution

Please allow me some space in our Standard Bearer to comment on the article of S. D. V., appearing under the heading “News From Our Churches” in the issue of February 15.

Permit me first of all to express that I fully agree with Mr. S. D. V. in regard to his feeling that what he writes is really not news. (Surely there must be sufficient news that could be gathered from our churches to fill the space allotted to him. If that were done the department would answer its purpose and Mr. S. D. V. would not have to fall into the error of writing on a subject about which he evidently has very little knowledge. The greatest portion of the article on which I am commenting was devoted to a discussion of the union problem, and the stand of our churches in regard to membership in the C. I. O. or A. F. of L. Now I wish to make clear at once that I am fully in agreement with the position of our churches on that question. But, I object to the manner in which it is presented by S. D. V., who makes no distinction whatever between unions, makes unwarranted statements, and finally dismisses the problem with a pious admonition to accept the discipline of the church in love—without offering any solution to the very practical problems which are presented to many Christian workers. It is very easy to do that for those who do not come into daily contact with the power of the unchristian unions, but it is another matter for one like myself who must constantly bear that cross and has a large family to support. Mr. S. D. V.’s reasoning is rather mysterious. He states in one place that readers may comment that the decision that members of our churches cannot be members of the labor union is “tough”, because we must live. He replies that of course we must live, but that in that way we cannot live because the wages of sin is death. How bright! To thus brush aside a remark concerning physical life with a reference to spiritual death is amusing, but also very confusing and far from enlightening.

He continues that kind of logic by stating that even materially the unions don’t gain anyone much, and that, anyway we are not interested in that because we have a rich Father in heaven who will take care of us! Strange reasoning! Of course we have a rich Father in heaven who has promised to take care of us, but we have also the responsibility to work for it. We cannot sit still. We are not fatalists! And we are interested also in material things. They may not be first in our lives, assuredly not. But, I am interested in earning sufficiently so that I can properly take care of my family, give my children Christian instruction, contribute to Kingdom causes, etc., thus rendering unto God that which is God’s.

I wish to state here also that the writer’s remarks in regard to the union not bringing much material gain, being oath-bound, etc., are not well-founded. It is an undeniable fact that through labor unions working conditions have been greatly improved. Wages have been brought to a level where a family can live as it ought to, and labor conditions in our modern mass-production plants have been placed under control so that a man is not simply regarded as a piece of machinery but is again treated as a human being. Those things must be appreciated. We cannot ignore them. And it is not true that all unions are oath- bound organizations, or that their Constitutions and By-laws are very innocent documents. That they do not recognize God as sovereign is true. Let that be emphasized. Above all, let’s remain honest and true in our charges.

It amused me also to note how Mr. S. D. V. charges some with making the sweeping statement that the church should also “tackle” members of the Associations (evidently businessmen’s associations are meant. B.  V.), then proceeds to argue that the unions and the Associations cannot, because of the difference in them, be mentioned “in one breath”, and finally ends up by stating as his conviction that there is in principle no difference between them, thus turning the accusation of making a sweeping statement against himself! One cannot help wondering whether Mr. S. D. V. really knows his own mind. This is my position: that a Christian may be a member of an organization that does not in its expressed purposes and practices violate Christian ethical principles of life, based on the Word of God. Also, that as soon as any organization, be it a labor union or a businessmen’s association, violates those principles there is no longer any place for a Christian in it. For that reason also I am convinced that membership in unions affiliated with the C. I. O. and A. F. of L., both of which have given abundant proof that they are unchristian in many of their practices, is not compatible with a Christian life. That conviction has sustained me in enduring oppression, ridicule and persecution over a period of years, imposed by a C. I. O. affiliate. I thank God that He has given me strength to endure it.

But the practical problem is thereby not yet solved. Someday the shop in which I am employed may become a closed shop. Then I have no choice except to quit. My family must be supported. It is easy to say that the Lord will provide. I believe that too. But God uses means also. And it is my duty to see to it that I do all within my power to hold my job and, if I must lose it, to put forth every effort to secure another. For one that may not be so hard, although it can be, but when there are many more in the same position the problem becomes just that much more difficult. If we do not find other work is Mr. S. D. V. going to take care of us? Or is he going to point us to the church, or perhaps to other means of support? Able-bodied men, anxious to work, should not be supported by the church, But, if the time comes that shops everywhere are closed to us, and the building-trades as well, what are we going to do? Mr. S. D. V. may answer that we are not that far yet, and that we must place our burdens upon the Lord, which would be characteristic, but that doesn’t answer the problem. The time is coming when we will have that situation, unless we wake up and fight it with all our might.

Right here I must find fault with Mr. S. D. V.’s method of placing all unions on the same level, and presenting it as if our church has condemned all of them. That is not true. It has endorsed the Christian Labor Association, of which I am proud to be a member. If we want to do something for our Christian workers let’s strengthen that organization. It has been the means in the hand of God to prevent the closed shop in the factory in which I am employed, that I surely believe. And it is continuously opposing it, not only there but in many other places as well. That organization is also trying, very heard, to get the labor laws of this country changed so that unions will be forced to recognize each other, so that in that way Christian workers may get recognition as organized labor in their own unions. What are we doing to help it in that great battle? Is Mr. S. D. V. a member of it?

I am as strong in my convictions concerning the C. I. O. and A. F. of L. as anyone. I agree with the stand of our churches, allow me to repeat that. And I am not saying this as one sitting in an easy chair, but as one who has been in the very midst of the fight for several years. This also I must say: there are many in the C. I. O. who do not want to be there. They were forced into it. That must be figured with. Let’s not be too hasty in our condemnation of such people. Labor with them, yes, and make it very plain to them that they must break their affiliation with the unchristian organization. But, give such people also the assurance that if they are thrown out of employment that then there will be provision made for them, if at all possible in the form of another job. That’s important. Urge them also to join the C. L. A., to fight for their rights as Christian workers through that organization. And, prevail upon Christian businessmen to form a Christian employers’ organization, especially for the purpose of providing work for those who become the victims of the C. I. O. and A. F. of L. closed shop policy. Such an organization could also join with the C. L. A. in fighting for changes in labor legislation, against the closed shop, etc.

That, Mr. Editor, is my contribution to this problem for the time being. I have tried to present a program as a solution. It is the only way as I see it. May God grant that all of us may see it, and that we may unite in fighting this evil which is becoming such a serious threat in our present day. 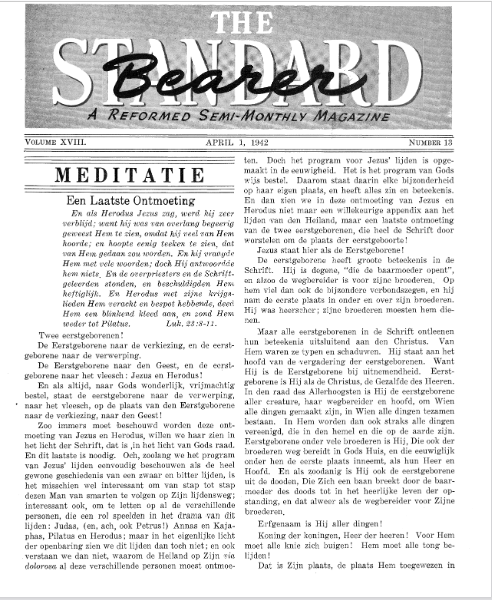