A Plan To Find The Poor

A Plan To Find The Poor

It has happened once again in most of our churches. A certain portion of the consistory has retired after two or three years of service; among them the deacons. Deacons have been elected, served, and retired and the disturbing thing is that many of them have not performed one minute of true deacon’s work. They have collected offerings during the worship service, they have kept records faithfully, and have accounted for these things before the elders; yet in all this something has been disturbingly lacking. And this lack, for the most part, is not even the fault of the deacons. The problem extends beyond the diaconate itself. Another year of contributing for various causes and to different funds on the part of the congregation has come to a close. By scanning various bulletins which one sees from time to time, it becomes obvious that most of our churches have a benevolence, or charity, offering once a month, and the average contribution of a family for this cause for an entire month is two or three dollars! Even here there is a certain rationale: where is the incentive for giving when by bulletin it is reported that the benevolence fund is swelling slowly, but it seldom, if ever, is reported, that there are withdrawals to indicate that the poor are being helped?

We call attention to these things, first, because their seriousness lies in the fact that we deal here with the presence of Christ in and with His Church. The three-fold office of God’s Anointed is reflected in His Body not only by the believer being a prophet, priest, and king under Christ, but also through the special offices of minister (prophet), deacon (priest), and elder (king). To the extent that the work of any of these offices is neglected the office of believers suffers; and sadly, an aspect of Christ’s presence with us fails to be realized and enjoyed. The point here is that to the extent the labors of the diaconate are not discharged, to that extent the tender mercies of our Lord for the poor, the widows, and the fatherless (how the Old Testament emphasizes this!) are not experienced nor revealed. The Bible, the Form of Ordination of Elders and Deacons, and the Church Order emphasize: “The office peculiar to the deacons is diligently to collect alms and other contributions of charity, and after mutual counsel, faithfully and diligently to distribute the same to the poor as their needs may require it; to visit and comfort the distressed and to exercise care that the alms are not misused; for which they shall render an account in consistory, and also (if anyone desires to be present) to the congregation, at such a time as the consistory may see fit.” (Art. 25) And the position of the Reformed churches is that this office, instituted “when a murmuring arose, because the widows of the Grecians were neglected,” is for all time.

The problem is also very serious for the believer on whom the oil of Christ’s anointing also rests. He is enjoined to present himself a living sacrifice to God with all that he has. This priestly function touches our possessions and our view of the poor. In fact, our regard for the poor and distressed is a matter that belongs to the definition of worship. James tells us that true religion, in part, is this: that we visit the fatherless and widows in their affliction (1:27); and the Heidelberg Catechism instructs us that the proper keeping of the Sabbath Day includes our contributing to the relief of the poor. We ought not to say, “I do this, I give once a month.” The idea of Lord’s Day 38 is certainly that these contributions are a weekly giving on the Sabbath. This is shown, in the first place, by the marginal reference to I Cor. 16:1-2: “Now concerning the collection for the saints, as I have given order to the churches of Galatia, even so do ye. Upon the first day of the week let every one of you lay by him in store, as God hath prospered him, that there be no gatherings when I come.” Further, Ursinus comments upon that which he has written as follows: “Hence it has always been the practice of the church to bestow alms upon the Sabbath day, and to perform acts of charity towards those who need our help and sympathy. ‘Send portions unto them for whom nothing is prepared; for this day is holy unto the Lord.’ (Neh. 8:10)” Those few churches in our midst which continue to take a weekly offering for the poor certainly have preserved the Scriptural, confessional idea.

REASONS FOR THE SITUATION

Undoubtedly the affluence of the past thirty years in our land has contributed to the present situation in the church. Members of the church have, for the most part, shared in this affluence and abundance so that there are very, very few who suffer the lack of daily necessities. The standard of living (a worldly term: man’s life does not consist in the things that he has) is so high that things undreamed of fifty years ago are commonplace. And yet, be assured that there are still poor. And if we don’t happen to know any, then we haven’t been looking, or possibly, haven’t been looking in the right places. If a recession came upon us, the order of its magnitude as in 1929, the office of the deacons would suddenly come into its own. Prayers need not be offered that such times come upon us again, but this does point out that times of scarcity and want in the land are spiritually healthy times for the Church!

There has also been a steady erosion of holy things of the Church into other spheres. More and more the tentacles of big government have snatched voraciously at functions not rightly government’s, and too often this has occurred without ecclesiastical resistance. The social arms of government at all levels have embraced cruelly the poor. The deacons’ hands are almost tied because we have become so accustomed to turning to social agencies in times of our distress. I suppose that it is natural for man to look to Uncle Sam rather than to Christ; but is it good? And is it right? The Lord is our Shepherd, and He shall feed His flock; He shall gather the lambs with His arm, and carry them in His bosom, and shall gently lead those that are with young.

But there is also a reason that strikes a bit more closely to home. Increasingly there is the tendency to simply take a collection for this or for that purpose, purposes which formerly were thought to be charitable. We have phased out, we have run rough-shod, we have bent here and there; and the result is that the poor are being helped without being called poor and the deacons are not involved. These things ought not so to be. Let us examine our local practices to see if, perhaps, we have inadvertently brought this sad thing upon ourselves.

Because we are convinced that lively labor in all the offices is necessary for a full congregational life and for a faithful witness in the midst of the world, and because the poor remain a special object of our love and sympathy, we make a few suggestions for your consideration in the hope that through discussion and study of the same, some small steps can be taken toward the attainment of the above.

1. Schedule a benevolence or charity offering once each Sunday for the principal reasons already stated. If the need is communicated to the congregation, believers with their children will respond and by responding will be blessed!

2. In close connection with this, the deacons must exert effort to find the poor. The second part of their office is distribution: today we must search before we can distribute! Specifically:

a. Let the local diaconate correspond with all the other diaconates inquiring as to the needs of the poor in their respective congregations. Do they have a large number of widows, hospitalized, poor? Could they use assistance in this for the mutual benefit of all? If an affirmative answer is received, perhaps this will enable you to help as much as you are able. (See the Church Order, Article 26) If not:

b. Let contact be made with deacons of other local churches. No, this is not some ecumenical scheme. This is an attempt to find the poor who have a special place in the heart and mind of God, and who may reside under another ecclesiastical roof. Some care ought to be taken here, that the integrity of the gift be preserved as it is administered by other deacons. The gift is not simply cash but mercy! Hence, we certainly have the right of stipulating that the gifts are brought to the poor with comfortable words from Scripture, and with cheerfulness and simplicity. (See Form for Ordination) What if this venture also does not yield the desired opportunity? We have not done enough yet.

c. Let a search be made among our unchurched neighbors. How are things in your town or in your section of the city? Again, this is not a call to social action . . . this is an attempt to meet our duty-privilege. What do we as Protestant Reformed Churches do in respect to the poor of this world? There were times in our churches when offerings were taken for refugees, for victims of floods and other disasters. Clearly, the Word of God cannot be brought by us to these, but does that mean we must shut up the bowels of compassion from them? We are in a sad case if pictures and news articles of the starving in this world do not move us to compassionate action. We find support for this contention in the Form of Ordination where we read: “. . . Assist the oppressed, provide for the true widows and orphans, show liberality unto all men, but especially to the household of faith.”

Perhaps the title we have chosen claims too much. Perhaps there are reasons why these suggestions will not work for your church. But they ought to be considered, and the consideration of them may open up other possibilities that will work. The decline in the proper work of the deacon’s office must be stopped, the trend reversed, in order that the presence of our ascended Lord may be fully revealed with us. 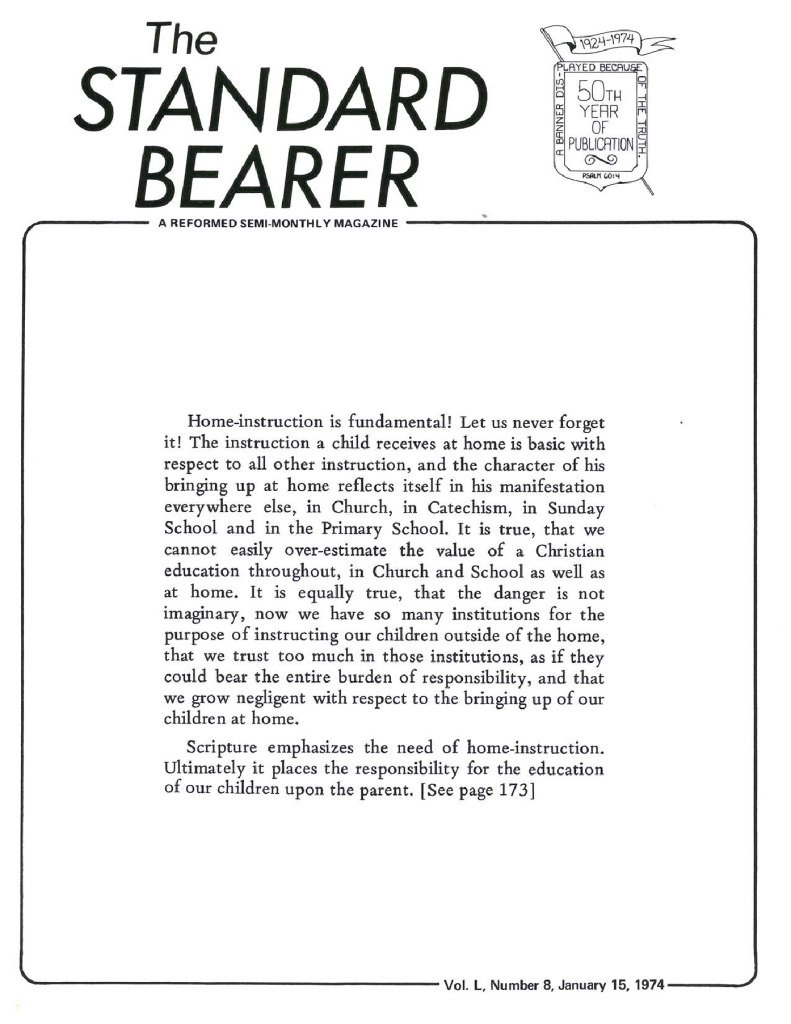