Vol 54 Issue 12 3/15/1978 By: Kuyper, Abraham, in Translated Treasures, Pamphlet Concerning the Reformation of the Church

7. Why the church in an earlier time had no need of its own regulations, but has this need now.

Under the dispensation of shadows there was an ordained ministry for the priesthood, but not for the Word. Now, on the other hand, there is no longer an ordained ministry for the priesthood, but there is a regulation for the ministry of the Word. Both these ordinations are not of the same kind. During the priestly ministration, the church was still concealed in the swaddling clothes of Israel and the priestly ministration bore a strong national character. It was entrusted to a single tribe, or, more specifically, to a single family; and not a spiritual preference but a fleshly appurtenance gave to this family or to this tribe the right of ministration. On the other hand, after the death of the apostolate, after the church became a world church, the church laid this restriction aside, displayed her spiritual face more purely than up to this point, and thus could no longer bind her ministry to natural descent and communion of blood.

But with the falling away of Israel and the expiration of Israel’s own unique significance for the church, all this becomes entirely different. The church is not destined to be a Greek or Egyptian or Roman church, but is destined to grow up as a world church. Therefore, by the loss of the organic power which was hid in Israel’s existence as a nation, the church of Christ cannot find fulfillment by clinging to the national bonds of Greece or Syria, Egypt or the Roman empire. Rather she must, to be able to fulfill her calling, be opposed to the danger of such a confinement in an unnatural straight jacket, and must be vigilant for her independence.

This it can do only through organization on its own foundation, independent of the organization of other peoples. Israel was established with a view to the church, created for the church; and out of that principle Israel could produce a fitting form for ecclesiastical life in its preparatory state. But this was unique with Israel. This could not take place with any other nation. There is not another nation established with a view to the church nor created for the church. Each attempt, therefore, to want to force on the church another national organization as if it were destined for her, would be unnatural, not fitting, and opposed to the nature of the situation. The church has no choice but to organize herself. Not in the manner in which Israel was organized, nor as a copy of the model of national organization, but according to her own nature agreeable to the requirement of her own life. Only in this way does the mystery of which the holy apostle Paul spoke come to its own.

8. From whom the fountain of sovereign authority rises for the church.

This separate organization of the church presupposes that there is an authority in her and over her. How would an establishment, an institution, or gathering be thinkable without a power to give commandment and the duty to be obedient to the commandment existing in her sphere. An institution which, without original or granted or conferred authority, would be like a wall without cement, a beam laid in a wall without anchors. Such as authority was also present in the preparatory church: first in Moses’ government under Jehovah, then in the judges, and afterwards in Israel’s kings. David’s house was vested with divine authority from God. That authority however was not only for a period of time, but was continuous, invested in David’s royal dynasty.

“I have once sworn by my holiness:

If I should lie to David, my word would deceive;

His seed shall be everlasting, his throne shall shine gloriously,

As continually as the sun, as glorious as her beams.”

Therefore, both must be true, namely that Israel’s kingdom should fall away and that David’s throne should stand forever. This is a seeming contradiction which finds its solution in this that David’s house first brought forth kings who only foreshadowed the true king, and after this brought forth that true King Who is called King of kings and Who is to remain King forever. Rome’s attempts also in this respect to imitate the Mosaic and Israelite situation in her vice-regency becomes an assault on our Lord’s honor. The Christ of God and He alone sits as David’s Son, Lord and King over His church forever.

9. How Jesus became King of His church.

Christ does not possess this royal authority of Himself. It is loaned to Him by the Father as the reward for His self-humiliation even unto death. Therefore, because He became obedient even to death, yea, the death of the cross, the apostle Paul says, “God also hath highly exalted Him, and given Him a name which is above every name: that at the name of Jesus every knee should bow, of things in heaven, and things in earth, and things under the earth; and that every tongue should confess that Jesus Christ is Lord, to the glory of God the father.” “To me is given all power,” Christ Himself testifies, “in heaven and on earth.” Thus originally all authority over the church, even as all power, rests with God triune, i.e., with Father, Son, and Holy Spirit. It flows forth from the fountain of divine sovereignty, and, in so far as Christ is God’s own Son and Himself God, He undoubtedly possesses also that original sovereign power over the church as His divine portion.

There is indeed given to the Son, in order that He may be a genuine King over His church, at the same time power over Satan who tempts the church and desires to overpower it; over the angels ‘who are sent out for the sake of those who shall inherit salvation; and thus over princes and nations under whose crowns and in whose midst the church appears and prospers. But this does not alter the serious and undeniable fact that Jesus’ kingship over His church is a reward for His inexpressible love. His reward is grounded in His self-sacrifice.

Even on this account His kingship is therefore inseparable from His priesthood; and in like manner, inseparable from His prophetic honor. Golgotha is no dead fact but the everlasting and always living event which is applied hour by hour and moment by moment by Christ actively to the souls of His elect. And because the word without authority can no longer be a word of God, there cannot be a prophetic witness in His church apart from His kingship. The priest and the prophet are one in the king, and every attempt to establish a priesthood after or apart from Golgotha, to establish a sphere of authority apart from the throne of David’s son, or also to establish an untrue word of man apart from the word of the man Jesus Christ, in the organization and formation of the church on earth, must be rejected and resisted as condemned by God’s word and as opposing Jesus’ honor.

Let it be said with emphasis: this all is true of the manJesus, because only as the Son of Man Jesus is our highest Prophet, our only High Priest and our eternal King. The Triune God is outside the church because He is above it, but the man Jesus Christ is in the church living in our flesh and blood. And just as it has pleased God to rule the nations through princes who are men and to whom He gives might, so it has been thought good to the Lord to rule His church through a King Who is man and Who by Him is girded with power. The only difference is that the princes are sinners and King Jesus is separated from sinners, and that therefore the authority which is invested in the crown of princes is invested in Jesus Christ as a power which rests in His divine person.

One must not think for a moment as if in truth Jesus is outside the church. Jesus lives in her, always administers in her His sacrifice, does everything through the procession of His high priestly intercession, and rules without interruption over her by His word and Spirit. Only through that constant prophetic, priestly, and kingly action of Christ is the church, and on earth only so much of the church of God comes to manifestation as that continuous, active working of Christ shines through and is seen in her external form.

¹ From many of Kuyper’s other works it is evident that Kuyper does not mean to deny in this paragraph that Christ is also the sovereign Lord over the nations. 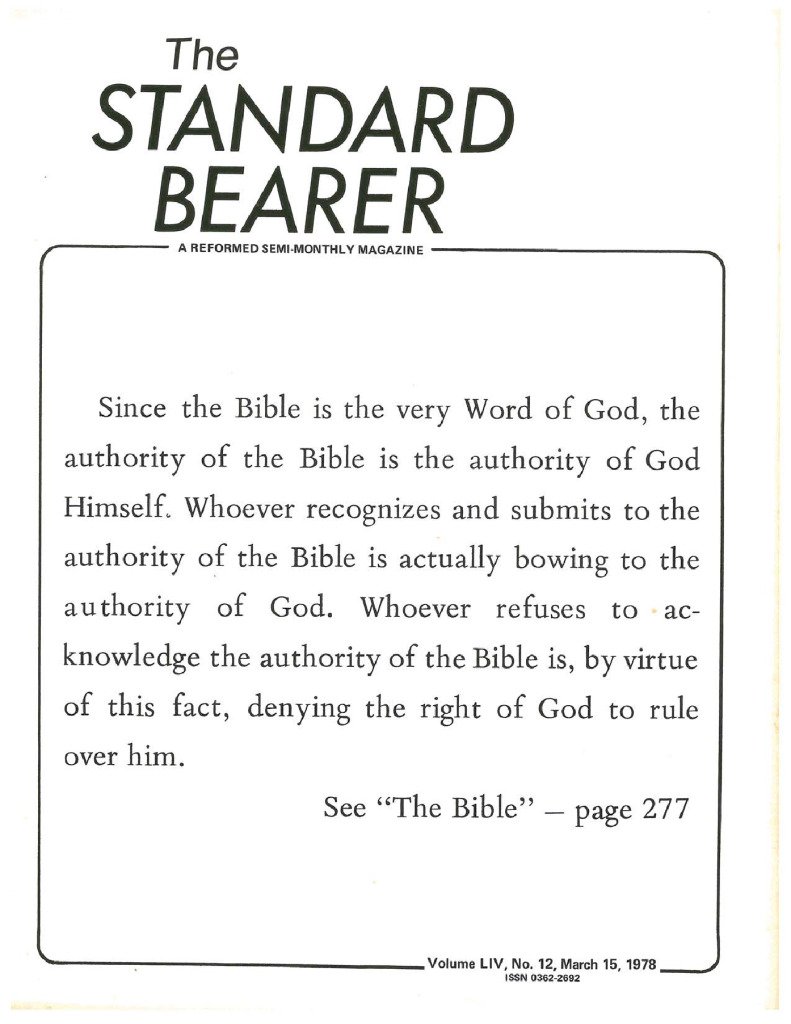