Vol 58 Issue 14 4/15/1982 By: Kuyper, Abraham, in Translated Treasures, Pamphlet Concerning the Reformation of the Church

(In discussing the positive side of the question, i.e., the renewal or reformation of the church, Kuyper has discussed the need for spiritual awakening in the hearts and in the lives of the individual members. In the last paragraph he insisted that this was essential to all church reformation. He proceeds now in the following paragraphs to the discussion of church renewal. This is a lengthy paragraph and we will divide it into separate articles.)

Alas, church corruption seldom limits. itself to deterioration in grace among the church’s teachers and members, but almost always drags along with itself a cooling of love and godliness, the falsifying of doctrine, and the general collapse of church government. Thus it is necessary, in the second place, to investigate what must be said concerning the second kind of reformation which we call, “gradual church renewal.”

We do not mean by this merely the nursing of a sick church.

Neither diagnosis nor nursing ought to be mentioned in the church of Christ; and the medical way which we have placed over against the juridical is not opposed to this, but is rather opposed to the surgical.

The matter is this.

If one wants to compare the ecclesiastical corruption of the church with corruption in our bodies, thenmedical treatment leaves the organism undisturbed, while surgical treatment, attempting to save the entire organism, disturbs a part of the organism with the surgeon’s knife. If now we refrain from surgical treatment in order to restrict ourselves for the time being to the medical, then medical treatment is, obviously, not always of the same kind. Everything depends upon the nature of the sickness to be cured. Sickness can affect either one of the organs, or, without having affected any organ, it can be a weakening or a sapping of the strength of life. If this last be true, medicine tries to cure that weakening through giving nourishment, or to cure this evil sapping of strength through purging. If, on the other hand, one of the organs is affected, then medicine is used to keep the remaining organs from being affected along with the sick one, and, as far as possible, medicine is used to expel the disease and to restore the affected organ to its original health.

If one now applies this metaphor to the church of God, then also, in connection with that church, a sickness is imaginable which comes about by means of contempt of grace, which manifests itself only in individuals, but which leaves the organism of the church unaffected. Nothing may or can be used against this evil other than the pure preaching of the Word in the pulpit, as well as in the homes. If, on the other hand, the corruption is of such a kind that not only the members but also the organism of the church itself is affected, then this method is insufficient, and good medicine must be applied to it to restore the affected organism to its original purity by expelling or destroying the evil element.

How one must do this depends, naturally, on the nature of the organism. The skillful physician works on the lungs differently than on the liver, on the kidneys differently than on the heart. Therefore, it must be asked, also in connection with the church, if corruption creeps into her organism, what are the channels, the ways, the procedures, which the organism possesses to drive out, heal, and restore? The answer is: these methods are of two kinds. The exercise of ecclesiastical discipline and the improvement of ecclesiastical ordinances. Thus it is as clear as day that the curbing of evil through reproof, suspension, and excommunication of unfaithful office-bearers, or also through reproof, censure, and, if need be, the banning of unfaithful members of the church, no matter how juridical, belongs to the medical way of church restoration. This is just as true as the fact that the strengthening of the power of life takes place through the preaching of the Word.

Nursing care is surely not a method of healing, but is either neglect of duty or the helplessness of hopeless despair. The physician who limits himself only to diagnosis is not worthy of this office. And the question whether one wants to treat the matter medically, whether preaching of repentance and conversion is sufficient, or rather, whether to proceed to the exercise of discipline and the revision of the Church Order, depends not on personal opinion, but only on the nature of the corruption which the church shows itself to have. If evil only finds expression in despising grace, then only a call to repentance is needed. But if the disease has penetrated more deeply and has affected the organism itself, then one must not stand by doing nothing, but must put his hand to discipline and the Church Order.

The ministers in Jesus’ church are surely not only preachers of the Word who can justify themselves before God when they only preach the Word on the pulpit and to a part of the families. They are by virtue of their office also church rulers, and as such are bound to the exercise of discipline and the maintenance of good order in matters of the church. To have the notion that the preaching of the Word is enough, while the task of church rule is left undone, comes down to nothing else than a preaching of that Word to others while the minister is himself disobedient to the calling of his office, and this without any twinge of conscience.

Yet, warning must be raised against another one-sidedness, namely, against the attempt and effort of those who, without any consideration for backsliding in grace and with a conscious minimizing of the powers which lie in the Word, imagine, in Pharisaistic pride and great unspiritual shallowness, that the seriously ill can be cured by magic if only they would cut off heretical elements and energetically revise the regulations of the church.

He who judges in this way knows neither his own heart nor the needs of the congregation nor the powers of the kingdom of heaven. What appears in the organism is hidden yet more deeply in the hearts and families, and church renewal shall never be anything else but a visible sham if the cure does not begin with the punishment of sin and the renewal of the covenant. The punishment of sin does not begin with the world nor with the undecided, but it begins with the people of the Lord themselves, and among that people each begins within his own heart.

Without that spiritual background each attempt towards church renewal is plagued by unfruitfulness. Then one can indeed put on a veneer, but never can bring out the lustre. Without personally clinging to grace, there may be a great deal of puttering and fumbling, but one does not cause the church to grow.

Bureaucratic men, knowledgeable in the law, who, in cold irresponsibility, plan together and devise how to take away the existing evils, may deliver piles of nicely organized regulations, but will never be considered worthy by the Holy Spirit to build the Lord’s spiritual house.

One sees an extremely painful example of this in the Hague Synod.

How these gentlemen have struggled and squirmed in order, by means of always new stipulations and always nicer regulations and ever more efficient measures, to heal the rupture in the church and to even out the roughness in the church. And yet what other fruit have they seen from their diligent industry and unmistakable talent and far from scanty exertions, than increasing dissatisfaction, a continual diminishing of power, and a further eating away of the gnawing cancer of sin.

Is this due to their lust and good will, or less ability, or lack of prudence?

He who thinks this is mistaken.

Most of the gentlemen who applied their strength to this idle and purposeless work were men of much good will; most decidedly they surpassed most of us in ability, and they were astute in judgment. No, what they lacked was the knowledge of the disease and the means of healing. They sought in the skin that which was deeply hidden in the kidneys. They ignored their own heart. They themselves did not have the sense of falling in guilt before a God Whose name was dishonored in and by His church. The Word of God was not recognized by them. They sometimes spoke of grace, but they did not understand it experientially. Prayer had become a form to them and the Holy Spirit did not preside in their gatherings.

And, naturally, in circumstances such as this, one plows on rocks.

Church decline is a punishment of God, a plague which He brings on us and lays on His people for their sins. Just because of this the Lord cannot take this plague from us unless beforehand he who feels guilt confesses it and is reconciled in the blood of the cross. Without that conviction of sin there can be no true repentance and conversion. And where this renewal of the covenant is lacking, how can one hope for a better church? 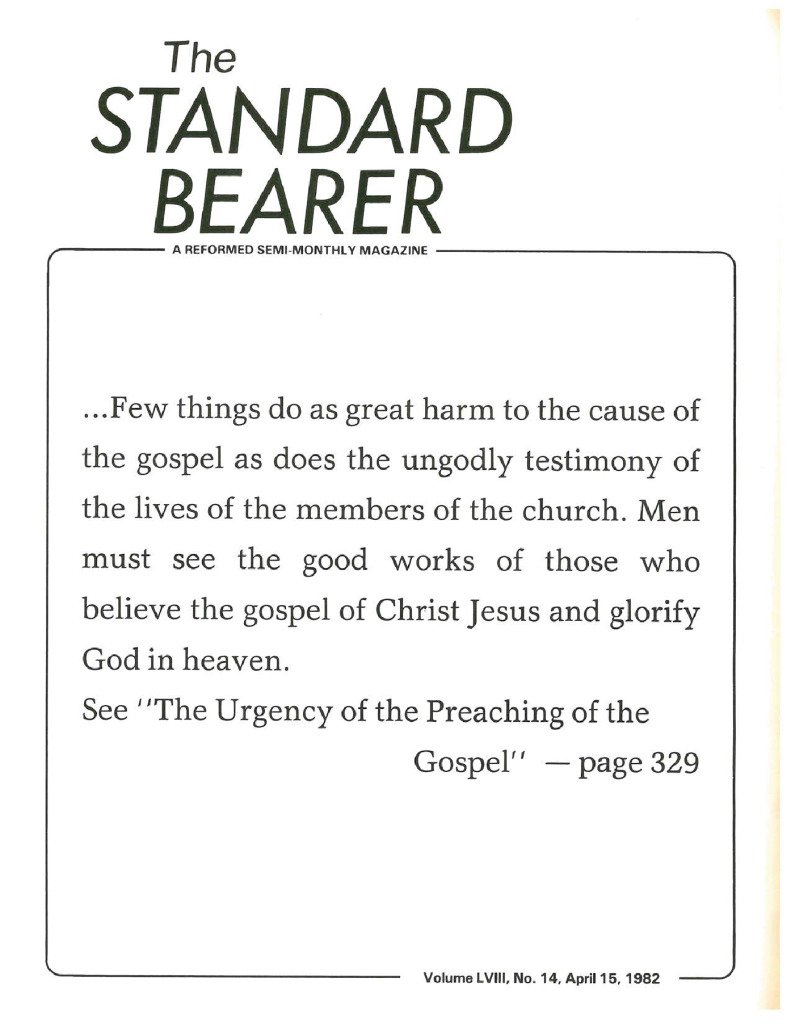