Vol 63 Issue 04 11/15/1986 By: Kuyper, Abraham, in Translated Treasures, Pamphlet Concerning the Reformation of the Church

We make our answer with the following observations.

2) This spiritual concern for the misery of the churches of God must lead to a personal confession of guilt and to personal conversion on the part of the godly. God’s child knows his own guilt as the deepest. Each is in his own eyes the greatest of sinners. Also the individual child of God must rise from that depth. There must be penance, conversion, a renewal of the covenant with the Most High.

3) From the personal life of the child of God this reformation must go over into our households and the circles of the brethren. First of all, the impulse for a better life must penetrate in that direction. It must be a matter of hope against hope. It must be a turning away from the world to the Lord of Hosts; a turning away from the tent of vanity to the tabernacle of our Lord; a hiding under His wings.

4) From this area of reformation, reformation must proceed toward an open conflict with-sin and false teachings. It must be a demonstration of mercy and a making known of the gospel of salvation. The office of believers which still slumbers must once again be shown to be glorious in its ministry. And the most serious-minded, rather than leaving this work to others, must be begged to lead the way.

5) In those churches which according to our third category are entirely dead, we must admonish the believers either to re-establish. a church of Christ or join themselves to another church which may exist in their locality, and thus establish a separated church. This must be done provided only that as many as can be gained from that church hold open the possibility of a new church connection with other Reformed churches.

6) In those churches in which, according to our second category, the pure administration of the means of grace is temporarily lacking, although there is still hope of renewal, we would entreat the faithful to establish without delay an aggrieved church; i.e., to bring into existence an administration of the means of grace under the leadership of a believing consistory expressly chosen for that purpose.

7) And in those churches where, in keeping with our first category, the pure administration of the means of grace is still tolerable, the believers will be led to use these means faithfully, to thank God the Lord for His manifestation of grace in these means, and to pray to Him that the administration will continue among them. Further, the believers are obligated, whether through instruction, family visitation, baptism, or preaching, not to exercise fellowship with such ministers or adversaries in their church as resist the counsel of God.

In the second place, concerning the persons who hold office we say:

1) That preachers, in whose vicinity congregations of these second and third categories exist, shall be bound to bring persons who live in these sub-circles to the knowledge of the gospel by missionary activities. They must also serve the aggrieved churches as moderators in every way in which it is desired.

2) That the preachers in churches where unbelieving co-ministers are found must break off all official fellowship with these men. This must be done in all humiliation with concern for their personal life so that no self-exaltation gives occasion for offense.

3) That preachers have continually to call attention from the pulpit, in catechism, and on family visitation, to the judgment of God which rests on the church. They have to awaken to true penitence and conversion. They have to lead by their examples in a holy walk and an improvement of life.

4) Preachers have to insist upon church renewal according to the Word of God in the gathering of the consistory. And if this does not work, they ought to meet separately with the confessing members of the consistory.

5) Preachers must insist in their Classes that particular attention be given to churches who depart from the confessions and who falsify the administration of the means of grace.

6) Preachers must use all zeal in the Classes of their churches to move the churches to humility before the Lord and to arouse them to a return to God’s law and testimony.

7) The elders, in so far as this is the calling of their office, must walk the same way as the ministers of the Word. This is especially true in the churches where there is no minister of the Word. They must feed the congregation with the Word, strengthen it with a substitute ministry and be helpful in the formation of aggrieved churches.

8) The deacons, just as the elders, in keeping with their office, must support the ministers of the Word in the reformation of the church and must arouse others to the work of mercy by a reformation of a love which has grown cold. 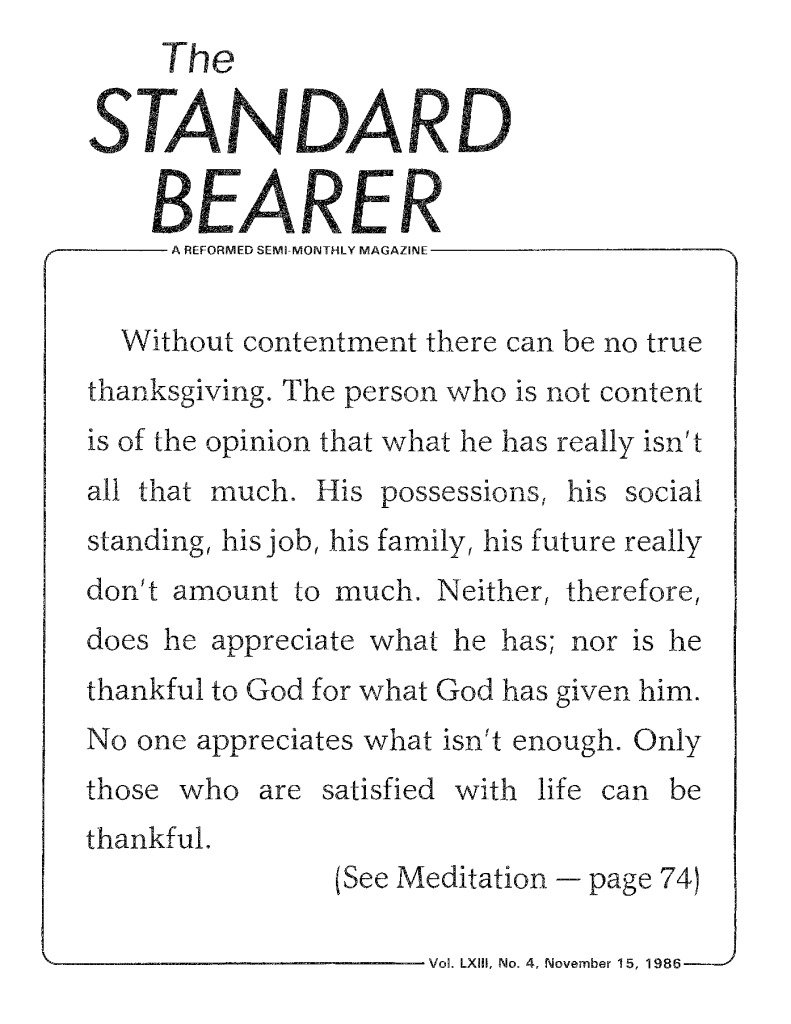