Vol 63 Issue 06 12/15/1986 By: Kuyper, Abraham, in Translated Treasures, Pamphlet Concerning the Reformation of the Church

In the third place, concerning ecclesiastical assemblies, the thoughts comes to us:

2)The consistories ought to strive to remove the non-confessing element from their midst and to break off all fellowship with unbelieving ministers.

3)The consistories ought to arouse their churches to a confession of guilt, to penitence and conversion, and to an improvement of life. To do this they must restore discipline.

4)The consistories must extend their church relationships to other churches in order to move these other churches to co-reformation. If this proves to be impossible, then they must break that church connection by the introduction of their own church order so as to regulate the state of their own church. Further, they must have fellowship with all such aggrieved or non-aggrieved churches who are one with them in confession.

5)Classes ought to refrain from elections of members to unlawful committees in order that these committees may cease to exist. Further, they are to cooperate with other Classes in order to call together from these Classes a lawful, spiritual, national Synod.

6)The Classical and Provincial committees which are not grounded in God’s Word and thus lack every divine right of existence ought to dissolve themselves.

The Synod of these churches ought to lay aside her assumed sovereign authority; to quit trying to be the crown of Christ; and the Classes ought to issue an invitation to come together by means of delegates on the grounds of the Formulae of Unity in better Synods. Through these Synods the reformation of the church federation as a whole ought to be taken in hand.

In the fourth place, concerning the magistrates:

The magistrate ought to grant to those churches which have completely broken with the State Church the privileges promised to them in the law of 1853 which recognized various denominations, i.e., as long as Article 168 is in force in the Constitution.1

In the fifth place, concerning the separated churches, we observe the following:

1)These churches have to emphasize more emphatically their independence as local churches so that every remnant of the Collegiate system is vanished.

2)They must maintain fellowship with other aggrieved churches which desire this.

3)As soon as the original churches have won back their freedom of action by spiritual reformation, by getting rid of unworthy elements, and by freeing themselves from every wrong church connection, these aggrieved churches have to amalgamate again with these churches into one local church even if that is in separate parishes.

In this entire church political part of reformation our churches will have to put themselves on the basis of Gods Word according to the Confession which is found in our Three Forms of Unity. These Formulae can never be equaled to the Scriptures; for that reason gravamena which might be brought against a creed on the ground of Scripture must be brought, not to a particular person, nor to an office bearer, but only to the churches gathered in a legal Synod. This is true because the Synod alone possesses the right to consider these matters and to decide concerning them in the name of the Lord.

65. Concerning the Matter Of Taking Over The Classical and Provincial Committees.

The way of taking possession of Classical and Provincial committees is something which seems to others to be desirable but is something which I ad-. vise against. It is not a preferable way because it is a way of opportunity by means of which principles lose their golden luster. More importantly, to sit in such a committee under this Church Order is an exercise of a power which belongs, not to us, but to Jesus our King. Further, even if one succeeded with the help of dissenting brothers, and thus without the firm ground of a confession, to take over church committees, he will ultimately have to separate even from these, and he will once again find himself in the same old struggle. Finally, what our brothers do not consider with sufficient seriousness is this: that one who goes through church reformation in such an unspiritual way and replaces the wonderful power of penance before God and the nobility of prayers with political calculation cannot be blessed.

If however, many of our brothers intend to attempt to do this, we do not wish to judge them and we give over the result of the struggle to Him without Whose higher inspiration all reformation fails.

But what other or better way than the one we have suggested is chosen by others for the reformation of our churches, one thing must be avoided by all the brethren of the faith with quiet earnestness and holy urgency. That is this: the spiritual stream which begins in confession of guilt and comes to manifestation and conversion of life must not flow away under the cold ice of church political maneuvering. The impulse for reformation by members or office bearers must never be restrained by an antinomian theory of concentrating on petty differences. It must never rest until all things in the church of God are once again done according to the rule of His Word. Finally, in connection with the zeal for the Name of the Lord, even when one brother must testify against another, a better love must not dry up in any of us but must blossom in every heart on the grave of our own ego.

1 The matters to which Kuyper refers in these paragraphs are matters that affected the reorganization of the State Church. In 1815 this State Church was reorganized during the time of Napoleon. In 1852 various changes were made in the Constitutions of the Netherlands’ government in connection with the Separation which took place under Van Raalte and de Cock. 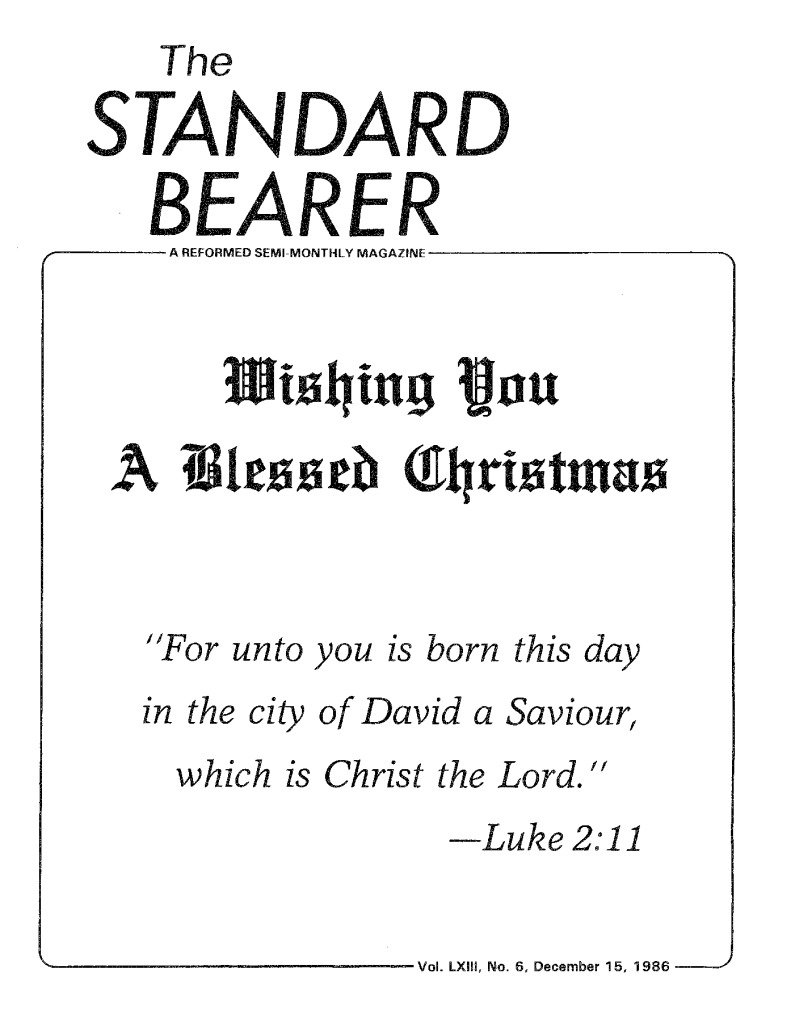