Vol 61 Issue 03 11/1/1984 By: Kuyper, Abraham, in Translated Treasures, Pamphlet Concerning the Reformation of the Church

(Kuyper is discussing the marks of the true and false church so that those who are called to engage in church reformation may be able to recognize the difference. He has criticized the view of those who hold to a pure-church ideal and who make the holiness of individual members a mark of the true church.)

This tendency to make the pure state of the church itself a mark of the true church, which is defended by all our Reformers and also by all the Reformed Confessions and by nearly all our good theologians, requires that there be in the church of Christ purity of confession and purity of walk. In this way the heart remains unjudged. One does not touch the state of the person. The person only comes into consideration insofar as the work of the church becomes manifest in the appearance and walk of the individual. The question is not whether each individual member is pure in confession, but whether the church expresses a good confession and whether in her walk as church the honor of God’s Word is manifested. However, because this can only be evident in her public act and walk, it brings us to the point where we must investigate whether principally the preaching is actually the preaching of the Word, whether the handling of the sacraments can actually be a vehicle of sacramental grace, and whether the church through the exercise of discipline covers that preaching and that sacrament.

Yet most permit discipline to slip, not as if the exercise of discipline does not belong to the essence of the church, but in that sense that it is not necessary to the well-being of the church: 1) a concession which must be made because else a strong maintenance of this mark would have led all but unnoticed back to the Donatist stream. Calvin then also declares that the church is already present when only the Word of God and the sacraments are visible. 2) Moreover, one takes into account the fact that during the first eighteen centuries in which Jesus’ church existed in the new dispensation, it was mainly in the first two and in the Sixteenth Century that there was an earnest maintenance of discipline. This automatically brings one before the dilemma whether to make discipline indispensable for the essence of the church or whether to confess that the true church of Christ was not seen for fifteen of these eighteen centuries.

No one concludes from this that discipline in Jesus’ church is not necessary. The opposite is true. Without discipline a church must become unholy and be ruined. But if one once confesses and believes that the church on earth has the purpose of being an instrument of the Holy Spirit whereby He regenerates the elect by the Word, then it follows directly from this that the essence of the church, no matter how imperfect, is present where the Holy Spirit finds this instrument ready for the regeneration of the elect. And let it be firmly established that the church can fulfill this ministry as long as the preaching of the Word is still found in her midst and the sacraments still seal this Word. Thus it is evident from the root of the Reformed Confessions concerning the church that the exercise of discipline cannot be an indispensable mark of the essence of the church. Just as a human organism continues to live even though one cuts the arms and legs off, but dies as soon as the heart or head is taken away, so it is with Jesus’ church. No more than anyone would consider it indifferent if he lost arms or legs, so also no one may say that a church can act and work well if her discipline is destroyed. But also, if the life, i.e., the essence departs from the man when the more important parts are struck dead, so also the essence of the church is first lost when the proclamation of the Word ceases in her or the administration of the sacraments falls away.

In our Confessions; therefore, the idea is not that each church which misses one of the main marks in its full purity shall be presently turned into the false church; but only this is meant, that a church in which the three marks shine must be positively recognized as the true church. There was opposition in those days. On the one side stood the Romish church. Alongside of it roared the Anabaptist sect. And over against both of these the churches of the Reformation had to establish themselves. These churches exhibited at that time the three mentioned marks to the fullest, and it was on that basis that our churches claimed themselves to be very positively and without doubt the true church of Christ.

That this is the meaning of our Confessions is convincingly true from the conclusion of Article XXIX. Indeed, if the article had meant that each church would be false in which one of these three marks was absent, it would simply have described an earmark of the false church: false is each church which misses one of these three marks. Our fathers were far removed from such a superficial treatment of the matter. Rather, they considered themselves obligated to circumscribe the nature of the false church, not in a negative but in a positive sense; not as a church which places its own ordinances above the Word of God, falsifies the sacraments, and neglects discipline. No, not that, but: “Which bases itself more on man than on Christ and persecutes those who desire to live holily.”

Thus, if we pay attention, not to the well-being, but to the being of the church, then the church would first be denounced as the false church when it sets the Word aside, falsifies the sacraments, and persecutes God’s saints. According to the spirit and meaning of the Holy Scripture as our fathers understood it, this must never be so conceived as if the preaching of the Word must be completely pure and the administration of the sacraments must be completely undefiled, upon punishment of losing her character as the church of Christ by a lack of the completely worked out quality.

Turretin gives us the sentiments of our church in a clear way when he says: “Further, one must not lose from sight that these signs admit of distinct degrees of necessity. On the first rung stands the pure preaching and confession of the Word, without which no church is conceivable. But already the administration of the sacrament is not on the same level as the preaching of the Word, so that it can be temporarily lost without the church falling away, as the church in Israel repeatedly showed. And this is yet more true with discipline, which is intended undoubtedly to maintain the church in good order, but the loss of which does not directly destroy the essence of the church. But further, if these marks are allowed with certain latitudes so that they can appear purer or less pure, and according to the extent that they more or less approach the Scriptures, the church, even though it remains church is purer or more impure. One must not stretch this to the point that basic errors are tolerated, but only lighter spots. Thus, just as a church which errs in the basics of doctrine cannot continue to stand, so it does not cease to be a church if it errs in a few respects. A church can be impure or corrupt in part without its ceasing to be church. Finally, it is to be noticed that a church is not to be judged according to the particular sentiments of its leaders, but from the public confession which is as such accepted and maintained.”

Calvin was of the same mind. His expressions are sometimes even stronger. He recognizes a church of God wherever there is still preaching and the sacraments are administered.

“Wherever the preaching of the Word is still heard with reverence, and the sacraments are not neglected, there undoubtedly the form of the church is still present.” (Institutes, C, IV, 1, para. 10.) And Calvin earnestly warns that where a semblance of these signs is still found, one should not separate himself from it. “Separation from the church is apostasy from God and Christ, and no greater abomination can be imagined than to break unfaithfully the bond of marriage which the Firstborn Son of God has established with us.” (Idem.)

He says in the following chapter: “Who would dare to deny the name of the Church to any gathering to which God still grants the preaching of the Word and the administration of the sacraments. . . ? There were certain degrees of apostasy even in Israel.” (Idem., L, IV, C, 2, para. 7, 8.) He then points out how sometimes in Israel almost all the preaching of the Word had disappeared and the sacraments were wholly polluted. Even idolatry crept in. But all this did not destroy the essence of the church. (Idem., para. 8, 9.) Sometimes even the prophets and the faithful disappeared, but the essence of the church continued even under these storms of unrighteousness. (Calvin, L, IV, C, 2, para. 10.) “Even though we insist that Rome’s church federation can make no claim whatever to the name church, we do not by this deny that there are still to be found churches under her jurisdiction.” He only maintains that if one would consider the marks, each of these Romish parishes and the entire body of the Romish church lack the legal ecclesiastical form. (Ib., para. 12.)

Add to this also a practical proof. The Lutheran Church never had any exercise of discipline in the sense of our Confession. Yet there has never been any doubt that the church of the Lutherans was a true church of Christ.

Also here the distinction between being and wellbeing applies.

Also here Calvin gives light: “Our statement that the pure preaching of the Word and the pure administration of the sacraments are suitable to guarantee the genuine character of the church, is not to be so understood that a church must be rejected when these two signs are present in such a way that they create offense. But more must be said. Supposing that something wrong has crept into the preaching or the administration of the sacrament, this does not give anyone the right to leave that church immediately. Indeed all elements of doctrine are equally important.” (Calvin, Institutes, L, IV, C, 1, para. 12.)

Our conclusion is, therefore, that for a second church and for the well-being of the church of God, i.e., for churches existing in a healthy and normal condition, the pure preaching of the Word, the pure administration of the sacraments, and the strict exercise of discipline are necessary and indispensable. 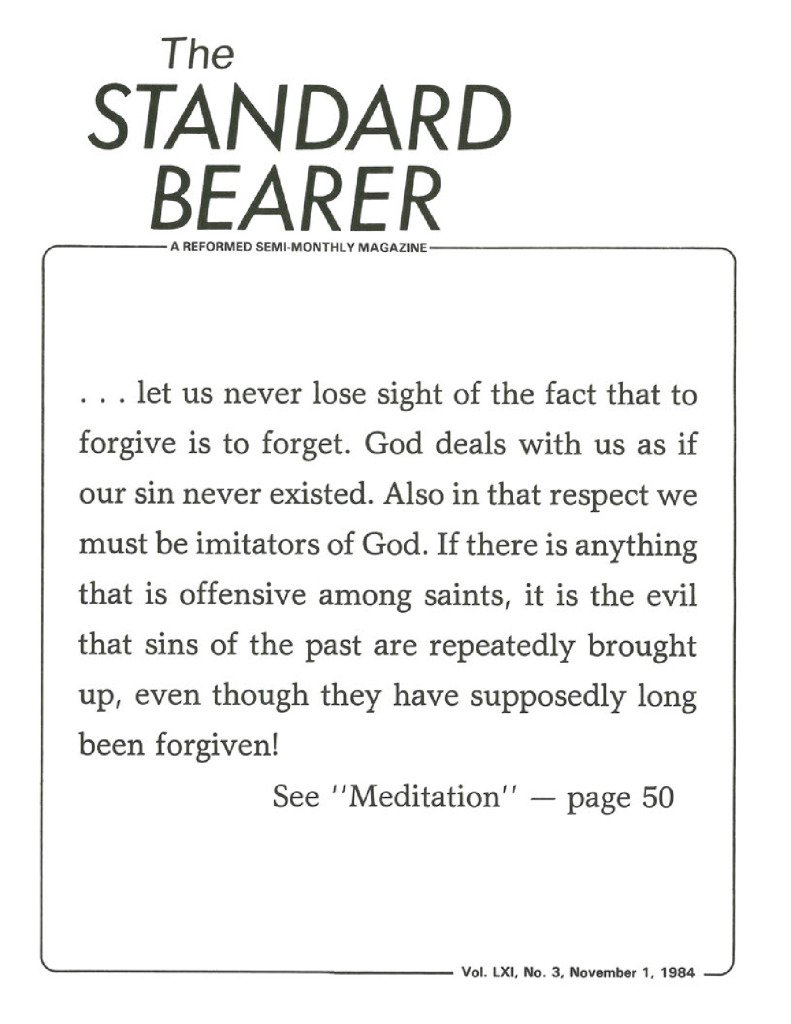