Vol 59 Issue 04 11/15/1982 By: Kuyper, Abraham, in Translated Treasures, Pamphlet Concerning the Reformation of the Church

(Kuyper is discussing reformation in the church through the way of separation from the church. He is discussing the conditions under which such separation becomes necessary and the individual’s calling to be obedient to God even when he faces opposition from his church. This kind of reformation must begin in the local congregation of which the individual is a member when that local congregation begins to lose the marks of the true church.)

If it happens that the church is remiss in the administration of the means of grace so that Christians receive neither the preaching of the Word nor the administration of the sacraments in the God-ordained way, then the obligation rests on the individual member to fill this lack. He can do this in the easiest way by moving to another church where a proper distribution of the means of grace is present. But this is not possible for everyone. Many are bound to the place where they live. In that case it can never be enough to rent a local hall and there now and then to let so-called evangelists preach. Instead, one is obligated to send for an ordained minister. And because this calling of a minister can take place lawfully only through a consistory, those who oppose their church are obligated to proceed to the appointment of elders and deacons and to call a minister through these office bearers. A minister for worship: thus not only someone who preaches now and then, but also a minister who administers both sacraments, i.e., not only the Lord’s Supper but also Baptism. Therefore a minister who with his consistory exercises discipline so that the administration of the sacraments is done properly.

We do not deny that this involves separation. We are treating exactly a reformation through separation. But we do want to notice that such a separation does not have to continue indefinitely.

During the turbulence of the Remonstrants’ controversy the faithful in the land followed a course of action which we described above. In fact, such a separation between consistories and the Reformed took place in various congregations that the Remonstrants, in the twenty-sixth and twenty-ninth sessions of the Synod in 1618-’19, openly accused these people of being schismatic, and on that ground challenged their right to participate in the ecclesiastical body. But this sentiment found little support and the English, the Genevan, the Palatinate, and the Bremer theologians explicitly testified in separate declarations that such a separation of oneself from those who are disobedient to God had nothing in common with schism.

We do not deny that such a step can lead to permanent separation; but it is also true that it is not impossible that the breach be healed. The example of 1619 shows this.

If anyone asks in what way such aggrieved ones have to proceed then this rule can be safely set forth: 1) If among the aggrieved there is a preacher of the congregation and some other members of the consistory, then the aggrieved must recognize these office bearers provided that they gather separately as the council of the church. 2) If members leave without a preacher, then they should invite one of the neighboring preachers so that he acts as moderator to guide the work. 3) If such a moderator is not obtainable, then they must proceed by themselves under the leadership of one of the oldest brethren to choose elders and deacons. Or, if the number of aggrieved ones is too small for this, then they must seek the shelter of a neighboring consistory which must temporarily care for this congregation as a part of its own.

This holds true for the attitude of the common members. Greater responsibility rests on office bearers. If it is indisputably the conviction of office bearers that the church which they serve does not walk obediently, then they may not rest. They must arise and pay close attention to how they themselves must be obedient and how they shall in obedience lead the flock entrusted to their care. To attain this goal they must restlessly enlighten the members of the congregation from the pulpit, in religious instruction, in the families, and if need be through letters and circulars. Secondly, they must press for improvement of ecclesiastical life in the consistory. Thirdly, without asking whether the consistory permits it, they must do what obedience to God’s Word demands of them and what is necessary for the congregation so that they walk in the way of God’s Word. And, fourthly, they must give assistance to churches outside their own who are in spiritual need.

If they are rebuked by the consistory for this they must bear this and meanwhile proceed in the same way in which they have determined to go. If one of the ministers is silenced through suspension, he must nevertheless continue to preach the Word and to administer the sacraments because this is his calling from the Lord. And if his consistory, in spite of this earnest warning and evidence of conviction, continues stubbornly to walk in the way of disobedience, he is finally obligated to break with the fellowship of such a consistory and be ready to help his church in calling together a faithful consistory.

What the result of such a clash will be we do not know. But certainly a minister of the Word must never avoid the way of obedience out of fear of monetary loss.

If one would want only to create a disturbance, his flesh would oppose his spirit; and in a short time his pride and pretensions would be forced to bow in shameful disgrace.

But if the desire to obey the Lord of lords motivates a man to walk in uprightness of heart, then such a one, who would witness even with his blood for the Lord’s name, if that is necessary, should never allow himself to be dissuaded from faithfulness to his Lord by temporal loss of money or goods.

In this case, however, the separation already will have gone further than the organization of the local church. It will have already affected the church federation, and so we will speak of this no more in this paragraph.

However, the question does belong here, in how far we can justify a break because of the corporate guilt of the disobedience of others. This question also arises where we are not compelled to be disobedient or where no one hinders us in the way of obedience.

At this point, out of fear of creating over excitement and recklessness we want to warn people most urgently to be doubly careful.

There are so few, also among the sensitive children of God, who feel this corporate responsibility so deeply that they confess their guilt before the throne of grace. And it is surely true, where this sense of guilt is not present, the first requirement which justifies separation is absent.

If on the other hand, it is true that the Holy Spirit leads the soul into this consciousness of guilt so that one does not only talk of the disobedience of others, but also feels weighing of his own heart his corporate guilt in the fellowship of the body of Christ, so much so that he invokes the blood of Christ over it, then most certainly one has both the right and the duty, even the full right and the inescapable duty, to break the bonds with such an organization. This is true because one does not walk out of his church nor judge his church as church and so much less denounces her as ,the false church, but rather because one breaks off all fellowship with his consistory as a quiet and earnest witness against her.

This duty reveals itself first and simply by not receiving the disobedient minister and elder when they come on family visitation. But one cannot stop there. He must continue his separation by protesting to the consistory, since the consistory may not passively ignore evil in the church.

So the presence of unbelieving consistory members can be the cause for believers to gather separately. This is something which can have as its consequence that also the consistory as such can be called of God to make such a separation. Indeed, a consistory which wishes to, practice obedience to God’s Word shall not be able to rest until the unbelieving members are removed from its midst, the congregational meetings are again held according to the confessions, and the ministry of unbelieving teachers is stopped. A” chairman of the consistory who wishes to be faithful in this shall not inform such unbelieving members of the meeting, shall omit their names in the reading of the roll, and shall refuse to give them the floor.

This shall almost certainly result in a clash or separation in the consistory or in the local congregation. But even the fear of this should not prevent anyone from carrying out his duty, and will not prevent him if only a proper conviction of guilt, aroused by the Holy Spirit, precedes and motivates the desire for obedience.

Even the state supervisors can be called of God to create a split, if they realize that they may no longer make the church building available for wicked preaching nor may pay out salaries to unfaithful preachers.

When disobedience becomes strong, obedience shall resist it directly.

We are not afraid of the clash which this must bring about. We will even bless this clash if it only is the work of the Lord and not a wild game of fanatic recklessness.

If the impulse comes from the outpouring of the soul in consciousness of guilt, from a soul which has wrestled in dust and ashes before his God, then even the stopping of one’s salary by the trustees of the church is reason to rejoice. But also, if there is not a consciousness of guilt, then only the self-exalting Pharisee is the zealous one, and woe to him who seeks separation. That one is not pleasing .to God, but comes under God’s judgment.¹ 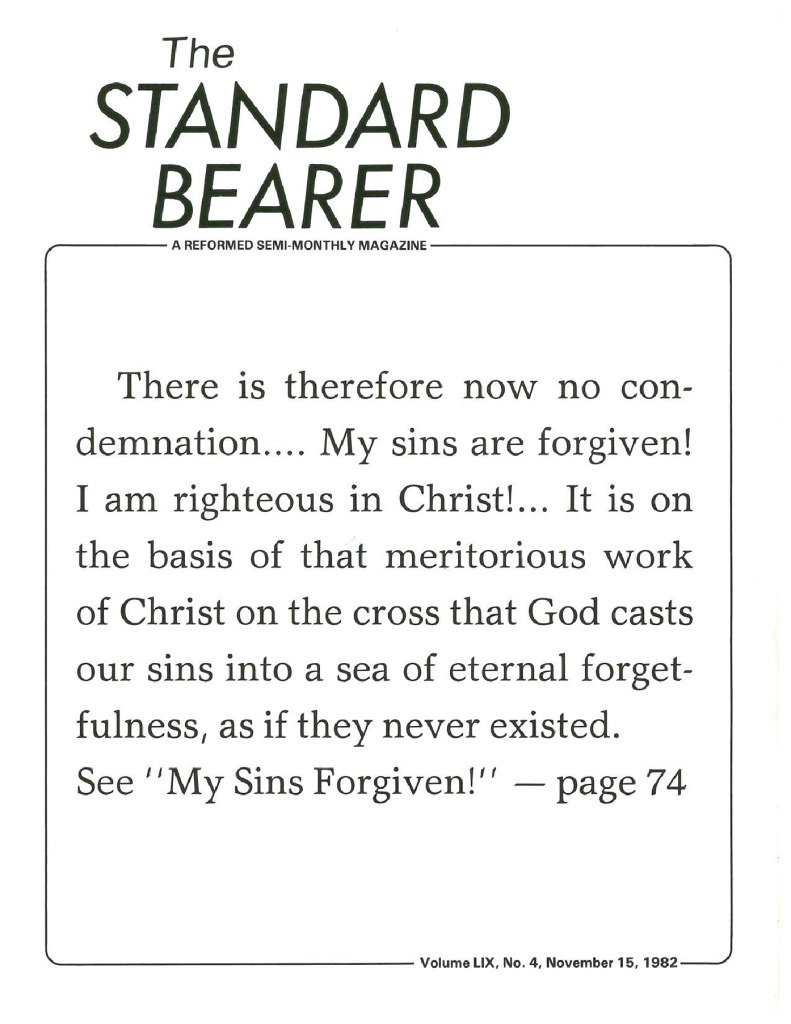