A rosebud opens slowly. Yet after a time the flower unfolds fully and stands before us in all its beauty of color, form, texture, and fragrance. This is God’s work; and this is the way God works.

A baby is born. Through a period of weeks and months it begins to learn to crawl, to talk, and to walk. In process of time we see a vibrant, play-loving boy or girl; and then soon enough a promising young man or young woman, strong and talented, revealing physical, mental and spiritual powers that were not to be seen at birth. This, too, is the work of God; and this is the way in which He works.

We must not, then, think it strange when in the life of Abraham the matter of God’s covenant develops so slowly, that is, so slowly according to our clocks and calendars. “O, God,” we are inclined to cry, “Why keep Abraham in suspense so long?” The rosebud of His covenant opens so slowly! It takes so long before the patriarch Abraham has all the details of that covenant. For years God had been talking about it, and the man is ninety-nine years old before he is told that Sarai shall bear him the son in whom all these covenant promises will be realized.

Twenty-four years had come and gone since God called him out of Ur of the Chaldees. And during those twenty-four years God said nothing about a child that Sarai would present to him. Instead it seemed as though God was saying by the advanced age of Sarai and her continued barrenness that she would never furnish him with an heir of all these covenant promises. Meanwhile, in Ishmael he seemed to see the opening of that rosebud and the realization of the joy of the fulfillment of the covenant promises. Sarai and Hagar also thought that this was a sure way of making sure these promises. After Ishmael’s birth God still said nothing to Abram to turn his eyes away from him as the one through whom Abram would have seed as the sand upon the seashore.

We can trace the steps, and we can see how slow these steps must have seemed to be to Abram. At the age of seventy-five Abram was called by God out of Ur of the Chaldees. Then already God promised to make of him a great nation; to bless him and to make him great; to make him to be a blessing and to bless all who blessed him, and to curse all those who cursed him; to lift him up so that all nations would be blessed in him. All this we may find in Genesis 12:1-3. When Abram arrived in the land of Canaan, God promised him further that unto his seed He would give all that land. This is taught in Genesis 12:7. After Abram some years later, and as the peacemaker, separated from Lot, God confirmed all this by stating more specifically that the land which he saw to the northward, to the southward, to the eastward, and to the westward would all be his and his seed’s. And He added that Abram’s seed would be like the dust of the earth in number. Genesis 13:14-17 informs us of this. A step further is recorded in Genesis 15:4 where God informed him that one that would come forth of his own bowels would be the heir. This was before the conception of Ishmael. There was yet no definite word that Sarai would be the mother. And at, that time it was repeated to Abram that his seed would be innumerable. Sarai at this time is seventy-six years old and Abram is eighty-six. And on God’s clock and according to His calendar the message that Sarai shall conceive and bear him a son must wait another thirteen years! The rosebud is opening, but from our point of view the progress is very slow.

It cannot be denied, however, that here we have come to a very crucial moment in the fulfillment of God’s covenant promises not only, but also in the revelation that God gave us of that covenant and its promises. And not at all strange is it that at this juncture, and with this last bit of revelation to Abram, God gives him (and Sarai) a new name. For that new name stands in an inseparable connection with the, covenant Seed that will be given to Abram. He will beget Isaac, and in due time—O how slowly that rosebud opens—Christ will be born. It is through Him that Abram will receive a new name; and without Him Abram can never become Abraham, and Sarai can never be called by God a princess.

Actually it was a covenant of grace in which man was created in the beginning. It was no covenant of works, for man was created in a covenant relationship. He did not have to do anything to enter into it. There was a way to walk so as not to become a covenant breaker, but the continuance of that covenant did not depend upon his works. It continued only by God’s grace. Indeed, it was not grace in the sense that Adam received the opposite of what he deserved. That is God’s grace to us as sinners fallen in Adam. But in the state of perfection in Paradise Adam lived in a covenant relation with God because God was pleased to give it to him. It pleased God to create him in a relationship of friendship entirely without his works, for he was not there to do anything to earn it. And it pleased God to keep him in that relationship until the moment that He had decreed for the fall. Adam did not continue in it because he earned one split-second of it. His obedience earned him nothing. It also was God’s gift to him.

But Adam did, according to God’s counsel, become a covenant breaker and forfeited all right to God’s fellowship and favour. And God glorified and restored that covenant in Christ, the last Adam, through His cross and by His Spirit. Of this God spoke in the mother promise of Genesis 3:15, where He spoke not only of a Seed of the woman that would crush the head of the serpent and of his seed, but also of One Who would restore in His people’s hearts the love of God and hatred of all sin.

And we ought to bear in mind also that all history, both sacred and profane, both that of the church and that of the world, all in the lives of the seed of the woman and all in the lives of the seed of the serpent serves the perfection of that Covenant of Grace in Christ. All that happens in time—and that includes the whole history of Satan and his devilish kingdom—serves the day when the tabernacle of God is with men, and He shall dwell with them in all the glory and blessedness of that covenant. For, indeed, all things work not only, but they all without exception, in heaven and on earth, in the church and in the world, work together for good to those that love God. And THAT our children should be taught in school as well as in church. The wheat cannot grow without the chaff and never grows apart from it. And you cannot teach the children about God’s precious wheat without showing them the work God performs through the chaff in, His inscrutable wisdom and sovereign workings whereby He sent His Son into the world and exalted Him above that world in order to realize this covenant of His grace.

One more truth to bear in mind is that because this covenant is restored in Christ, and because, as the last Adam, He is the Head of that covenant, all its promises are given in the first place to Him. And, indeed, He earned the right to all the blessings of that covenant by His cross and obedience. Abraham, therefore, receives these promises for His sake; Christ does not receive them because of Abraham. Christ, though He came out of the loins of Abraham, as far as His human nature is concerned, owes Abraham nothing, and does not have the covenant promises because of Abraham or because of anything Abraham had done. Christ does not have them because the promise was given to Abraham. Abraham has them because they were given to Christ. That is what we are taught in Galatians 3:16, “Now to Abraham and his seed were the promises made. He saith not, And to seeds, as of many; but as of one. And to thy Seed which is Christ.” Christ is that Seed of Abraham. Abraham is in the flesh and in time before Christ, but Christ is before Abraham legally and in God’s eternal counsel. Christ is the physical seed of Abraham, but Abraham is the spiritual seed of Christ brought into being by His Spirit.

And so, when God promises Abraham a son through Sarah He promises this Christ and all the grace of God in Him. And that makes it possible for Abram to receive the new name of Abraham, which means, “Father of multitudes.” And this does not mean that earthly multitudes and fleshly nations of men shall come from him. There were nations besides the nation of Israel that sprang forth from Isaac who owe their existence to Abraham. Nations came forth from Ishmael and from the sons of Keturah. But this is not meant. What is meant is that a multitude of believers, a whole kingdom of elect will be his spiritual seed. That is also why he is called “The father of believers.” And that this multitude is the innumerable host of the saints is evident from the fact that the same thing is said to Sarah. In Genesis 17:16 we read, “She shall be a mother of nations.” And from her came only the Israelites. But through her son Isaac, and the Christ, Who came in his line, a multitude of elect, a host of believers were born. But take away the Christ, remove this covenant Head, in Whom the covenant was restored after the first Adam fell, and Abraham and Sarah themselves are not in the covenant. They cannot be named in it, for then there is no covenant. And surely they cannot be called by their new names, “Father of Multitudes” and “Princess.” Instead they must be called covenant breakers and rebels of the Most High!

And we, that multitude of Abraham’s spiritual seed, also receive a new name through this Seed of Abraham. We, who have no physical connection with Abraham, we who have no blood ties with him, become his spiritual seed through the Seed to Whom the promises were given after the first covenant head, Adam, fell and became a covenant breaker. We have the new name “Children of God.” And some day soon—for the rosebud has unfolded considerably, and we are in the last hour of its development—the truth of Revelation 2:17 will be ours to enjoy. We shall, each one of us, receive “a new name which no man knoweth save he that receiveth it.” We shall receive a new name in a new creation; and all God’s children shall be home with Him. And all this is through that Seed Who is promised to Abraham. For, as children of Abraham, as his spiritual seed, this promise is also unto us. 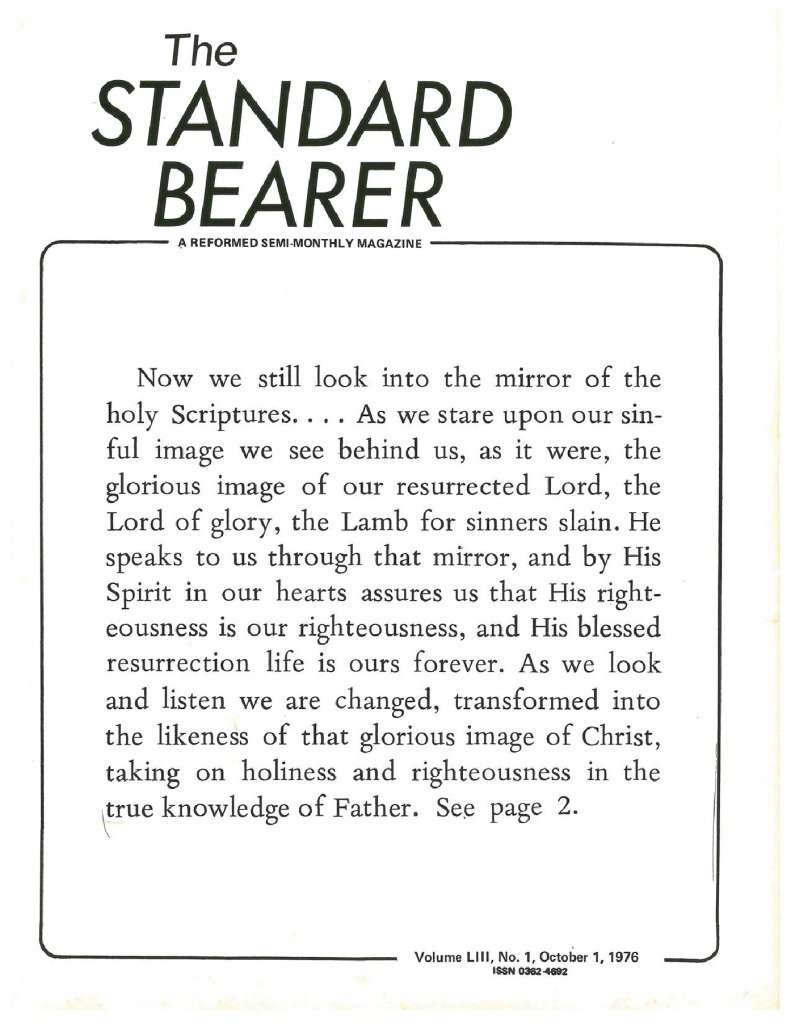