WORLD VISION International is an interdenominational missionary service agency organized to help meet emergency needs in crisis areas through existing evangelical agencies. Its deepest concern is for the great masses of people who have never heard the Gospel. Along the way of its many Red-Cross-style activities it sponsors evangelistic crusades, Bible study, Bible memory courses and distribution of Scripture portions. Doctrinally, World Vision’s statement of faith includes belief in the infallible inspiration of Scripture, the Trinity, the deity of Christ, the virgin birth of the Lord, His sinlessness, miracles, vicarious atonement, resurrection, ascension, session and return; regeneration by the Holy Spirit, the resurrection of men, either to a resurrection of life or a resurrection of damnation, and the spiritual unity of believers in our Lord Jesus Christ. This is all well and good, as far as it goes, which certainly is not as far as the great Reformation truth drawn from Scripture. But the feeble cry of this statement often seems drowned out in the din, clash and clatter of “some battle.”

The organization maintains a film library revealing missionary labors in the Orient and conditions in China (before the bamboo curtain), Japan, Hong Kong, India, Indonesia (Java) and Korea. These films might be reviewed and evaluated by anyone desiring to make a study of contemporary missionary work. It is, admittedly, greatly necessary that we have an up-to-date picture of the foreign mission field.

There is also what is called a “Viet kit” ministry. Church groups and individuals make up school kits, hygiene kits and sewing kits for refugees fled from the terrors of war with absolutely nothing but the rags clinging to their bodies. The dire necessity for such an item as a hygiene kit; for example, is evident in the fact that soap, towel, comb and other personal cleanliness articles cost a full days wages, which, of course, thousands of destitute refugees do not have and cannot earn. Hundreds of thousands of these kits are distributed each with a Gospel of John in Vietnamese. To anywhere meet the need, a million more must be distributed. Information on how to provide, assemble and where to send these kits is furnished on request.

There are World Vision orphanages and children’s homes with 24,000 orphans and destitute children in 19 countries. These children are educated, trained in the Bible, in nursing and in sanitation to prevent epidemics. There is the sponsorship of medical clinics, hospitals, leper asylums, and the sending of tons of medicine, vitamins, dental and hospital equipment. In connection with the mention of vitamins, it is pointed out that there is a desperate need for huge supplies of them because of hundreds of thousands of children, who, where any food is available, are on a largely starch diet, lacking proteins and vitamins, so that there is much of the widespread baby disease,kwashiorkor, which causes intense listlessness due to huge vitamin deficiencies. These philanthropic efforts are used as a means of putting the Scripture into the hands of Orientals.

The organization also has a data processing and communication center the nerve center of which is an IBM 360 computer, model 30 (four tapes, 16k memory). By this means data will be on file recording the work of the church around the entire world. Gathered from the denominations, missions, individuals and in-depth studies by World Vision’sMissions Advanced Research and Communication Center (MARC) there will be kept a complete record of people, who they are, what they are attempting to do and the methods they are using in missionary endeavor; a record of organizations, who they are, their purpose, how they execute it and results obtained; a record as to peoples, anthropological, sociological, ecological and religious data as it bears on the task of the church—a program “covering the world people by people will be undertaken.” This computerized research will also provide analysis of methods of evangelism and church nurture which are effective, ineffective and contra-evangelistic. Information is supplied on request relative to analysis of missions research and on the use of the computer systems approach for missions. For sale is a directory of North American Protestant ministries overseas. It lists denominational sending boards, non-denominational missionary sending societies, boards and committees of missionary educational and college associations, fundraising and fund-transmitting agencies, missionary associations agencies and members thereof, and theological seminaries reporting professors of missions. Over 400 mission agencies are compiled. These agencies are described by name, address, officers, publications, income and expenditures, number of missionary personnel overseas, number of nationals supported, institutions and countries in which they operate; Each agency is cross-referenced to Goddard’sEncyclopedia of Modern Christian Mission and theWorld Christian Handbook. The directory is advertised as “a must for anyone seeking a factual and authoritative service of information about and for missions”—an important reference for professors of missions, students of missions and seminary libraries.

Publications include World Vision Scope, a 16-page magazine free on request, and World Vision Magazine, a 48-page magazine with a subscription price of $4.00 per year. This magazine reports on a great deal of social welfare activity interspersed with modern, activist sociological jargon. Interesting is a remark to the effect that “pietistic and puritanical” Christianity (whatever that may mean!—Fundamentalism, perhaps?) is rejected and is said to be especially repugnant to young people. (W.V. Mag., Apr. ’69, p. 5) Another statement suggests need for “in-depth, prolonged interaction with the Bible, theology and the principles of sociology and culture” (ibid.). With no further elucidation offered, such words sound like a facade for some proud superficiality. Then you read of dialog in the field of comparative religion, agrarian reform, ecumenism and church union, foreign aid, friendship in foreign relations and the recognition of “planned parenthood” (the current euphemism for “birth control”) as a necessary indicator of logic and conscience. Suggested means for obtaining overseas slots for Christian witnessing are such organizations as the U.S. State Department, Radio Free Europe, CARE, Inc., and the Ford Foundation. Under this haystack of the “Great Society” could there be somewhere the needle of the pure Gospel? This issue of the magazine closes with the call “for eagles, not ostriches” in the poetic exhortation:

Are you sheltered, curled up by the world’s warm fire?

Then your soul is in danger.

Your ease is the ease of the cattle.

World vision characterized the early New Testament church as is evident in its divine mandate, “Therefore go ye, disciple all the nations, baptizing them in the name of the Father and of the Son and of the Holy Spirit, teaching them to keep all things whatsoever I commanded you,” and “Go ye into all the world and preach the Gospel to every creature.” That infant church, as with our own churches, had no Christian college with paradisiacal campus, no modern-equipped radio station, no teletype machines, no batteries of tape recorders, no full-color, completely outfitted TV studio, no acres and acres of publication houses and printing plants with giant four-color, web-fed presses and binding machines, no Bible correspondence course staff, no electronic computer data processing center, with terminal controls systems department. Yet it spread the good seed of the Word of God throughout almost all of the Roman Empire, and soon after Pentecost came to be about five thousand men in number (to say nothing of women and children). This in no wise discourages the tiny, unnoticed denomination of nineteen churches, with four vacancies and but little over three thousand members. For throughout all its history it has been busy declaring and publishing the promise of the Gospel “to all nations and to all persons promiscuously and without distinction, to whom God out of His good pleasure sends the Gospel.” Smallness does not prevent sowing the good seed of the kingdom to the other side of the globe. Nor does it prevent, in days of apostasy, the faithful standing for, maintenance of and steadfast continuance in that whole body of truth which the Spirit of God through the ages has given the churches in the Three Forms of Unity, the Reformed Confessions. Nor does it hinder the proclamation of what “is the perspicuous, simple and ingenuous declaration of the orthodox doctrine” as “regulated by the Scripture, according to the analogy of faith” and as setting forth “the genuine sense of the holy Scriptures” (Canons of Dordt). Size and access to modem implementation have no monopoly on world vision. Be inspired and encouraged to the action of the sowing of the seed and the leaving of the results to God by one tiny, insignificant Protestant Reformed congregation nestled in Uncle Sam’s hip pocket (Lynden, Washington) from whence is spread the Word of God all over the land, around the world and in the islands of the seas. And so far, it has no IBM system 360 model 50. We agree with a great man who said, “When a bush is nothing but a bush, it is soon consumed when it is set on fire; but when it is a bush that bums on and is not consumed, we may know that God is there. So it is with a church that is flaming with holy zeal.” As churches we are predestinated to seed the world! 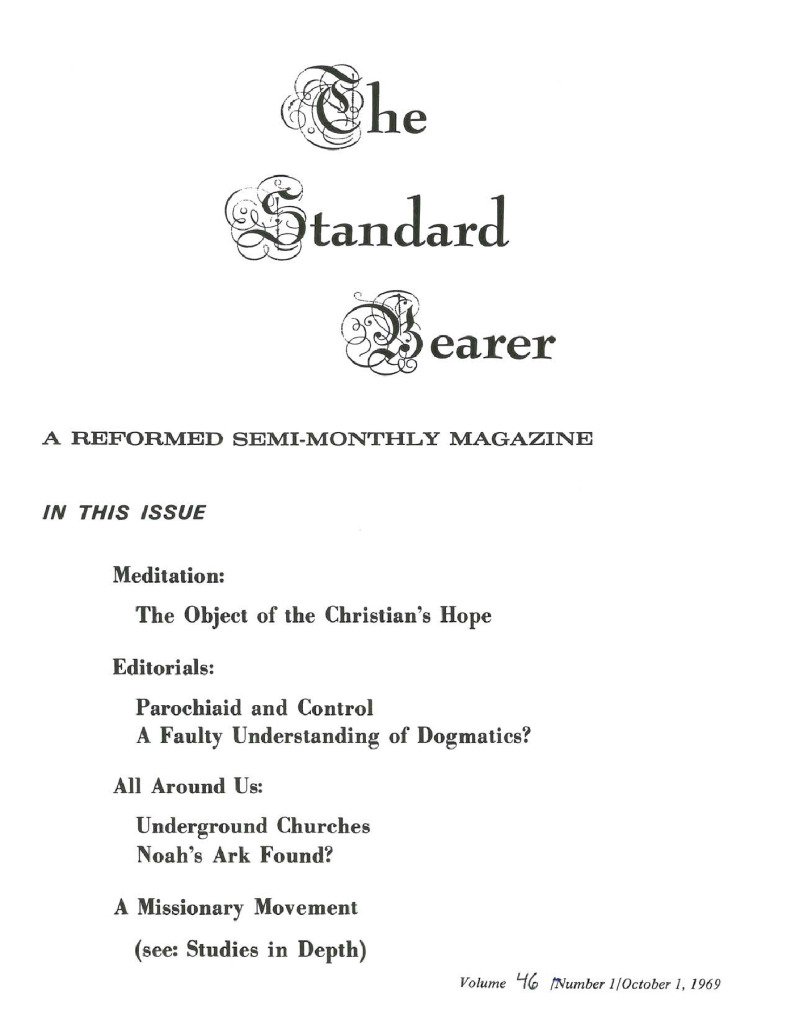