The Baptist Examiner is running a series of articles on amillenarianism by pastor E. Garrett of Hamilton, Ohio. Garrett is, evidently, a premillennialist, although he does not subscribe to all the excesses usually connected with that system of thought. In his articles he criticizes the amillenarian conception of the final coming of the Lord, that is, the view that denies that there will be a thousand years of the reign of Christ on earth before the end of all things.

It is not my purpose to criticize in detail what pastor Garrett writes. It promises to be quite a lengthy series and the author has just begun to write on this subject.

I only wish to call attention to one item which, to my mind, is rather important. It is that the author accuses the amillenarians of refusing to take Scripture at its word and of introducing a figurative or symbolical meaning in the text of the Bible where it should be interpreted literally.

“The one thing that is apt to make one amillennialist or premillennialist is whether he takes a literal interpretation or an unjustified spiritual interpretation of the Word of God. When one takes a spiritualizing or allegorizing interpretation of the Scriptures â€•without evident ground for doing so â€•he may come up with anything he so desires. But to interpret a passage literallyâ€• unless there is cause to do otherwiseâ€•is to be bound to the exact meaning of the words used. In the Old Testament as well as in the New Testament as well as the context will have a qualifying adjective or statement which will forbid us from taking a passage literally when it is to be spiritualized. Passages that are clearly set forth in the New Testament as allegorized portions are such as

but to say that the actual persons and places mentioned in the passages are not actual is evident heresy.”

Now, in both the articles that have thus far occurred on the subject, the author, evidently, accuses those that hold the amillenarian position of such false spiritualizing or allegorizing. And I will briefly show that he is in error.

To do this, I will limit myself for the time being to the book of Revelation and, more particularly, to the numbers occurring in that part of Holy Writ.

Pastor Garrett must admit that the only place, in the whole Bible, that speaks of a thousand years isRevelation 20. If, then, I can show that all the numbers in this last book of the Bible have a symbolical significance, it is not erroneous but sound exegesis to interpret the number one thousand in Rev. 20 in the same way, i.e. as having a symbolical meaning.

First of all, then, there is the frequently occurring number seven. This number denotes a fullness, whether you understand it as the sum of three and four, indicating God and the world, or as the sum of six and one, the six days of the week and the rest of the sabbath.

Moreover, pastor Garrett knows as well as I do that the number seven as the sum of three and four and as the sum of six plus one constitutes the basis of the entire book of Revelation. There are seven seals, seven trumpets and seven vials. Besides, the number seven, also in this case, is plainly revealed as four plus three and six plus one. The first four seals become revealed as the four horsemen sitting upon white, red, black, and pale horses. Besides, the sixth seal is dissolved into seven trumpets, so that it is very evident the seals represent the number seven, both as three and four and as six plus one. Here, therefore, we have symbolism pure and simple, the symbolism of the number seven. The same is true of the seven trumpets. If you will read chapters eight, nine, and sixteen of the book of Revelation, you will find that also the seven trumpets in which the seventh seal is revealed, are distinguished as four and three, and that the seventh trumpet is revealed in the seven vials. And the same may be said of the seven vials, i.e. that they represent the numbers four and three. There can be no question therefore, that the entire book of Revelation is full of the symbolism of numbers, particularly of the numbers three, four, and seven.

Remember that I wish to show that we must interpret the number one thousand in Rev. 20 as having symbolical significance and that to explain it in the literal sense does violence to the whole book.

Again, we read in chapter seven of Revelation of the sealing of the one hundred and forty-four thousand. An angel, having the seal of the living God, cried to the four angels to whom it was given to hurt the earth and the sea: “Hurt not the earth, neither the sea, nor the trees, till we have sealed the servants of our God in their foreheads. And I heard the number of them which were sealed: and there were sealed an hundred and forty and four thousand of all the tribes of the children of Israel.” And then it continues to inform us that out of every tribe there were sealed exactly twelve thousand. Now, for the present I am not interested in the question whether we must understand the name Israel in the literal sense of the word, as referring to the nation of the Jews, or in the spiritual sense, as referring to the Church, though there is sufficient reason in the chapter to prefer the latter. But I am writing about the numbers in the book of Revelation. And who can doubt, even though there is nothing in the immediate context to suggest the symbolical interpretation, that it must be understood in the latter sense? This is clear from the rest of the book especially from chapter 21 where we read of the new Jerusalem coming down from God out of heaven. There, too, the number twelve predominates. We read: “And had a wall great and high, and had twelve gates, and at the gates twelve angels, and names written thereon, which are the names of the twelve tribes of the children of Israel: On the east three gates; on the north three gates; on the south three gates; and on the west three gates. And the wall of the city had twelve foundations, and in them the names of the twelve apostles of the Lamb. . . . . And the city lieth foursquare, and the length thereof is as large as the breadth: and he measured the city with the reed, twelve thousand furlongs. The length and the breadth and the height thereof are equal. And he measured the wall thereof, an hundred and forty and four cubits, according to the measure of a man, that is of the angel.”

And what, please, would pastor Garrett do with the numbers that are mentioned in chapter eleven? There we read in vs. 3: “And I will give power unto my two witnesses, and they shall prophesy a thousand two hundred and three score days, clothed in sackcloth.” And in vs. 9: “And they of the people and kindred and tongues and nations shall see their dead bodies three days and an half, and shall not suffer their dead bodies to be put in graves.” And in vs. 11: “And after three days and an half the Spirit of life from God entered into them, and they stood upon their feet; and great fear fell upon all that saw them.” Would he explain all these numbers literally? I would like to see him attempt it.

That the number twelve hundred and sixty days in chapter eleven refers to the entire new dispensation of the Church in the world is evident from chapter 12:6 : “And the woman fled into the wilderness, where she hath a place prepared of God, that they should feed her there a thousand two hundred and three score days.” The woman that is mentioned here is, evidently, the Church. In the chapter she is described, first of all, as the Church of the old dispensation. For we read: “And she being with child cried, travailing in birth, and pained to be delivered.” vs. 2. And later we read: “And she brought forth a man child, who was to rule all nations with a rod of iron and her child was caught up unto God, and to his throne.” The dragon that is mentioned in the chapter is the devil. All through the old dispensation the devil stood before the woman, in order to destroy her even before the man child should be born or to destroy the child as soon as he should see the light of day. But the child, that is, Christ, is born and is exalted at the right hand of God. And now, in the new dispensation, the devil persecuted the woman. To this the twelve hundred and sixty days of vs. 6 as well as the “time, and times, and a half a time” (vs. 14) has reference.

But, at any rate, it is evident all these numbers cannot be explained in the literal sense, but have symbolical or figurative meaning.

But let this be sufficient.

I believe that I have proved that the numbers in the book of Revelation all have a symbolical meaning.

Hence, I am not doing violence to Scripture when I also explain the number one thousand in chapter 20 of the book of Revelation in the same symbolical sense. 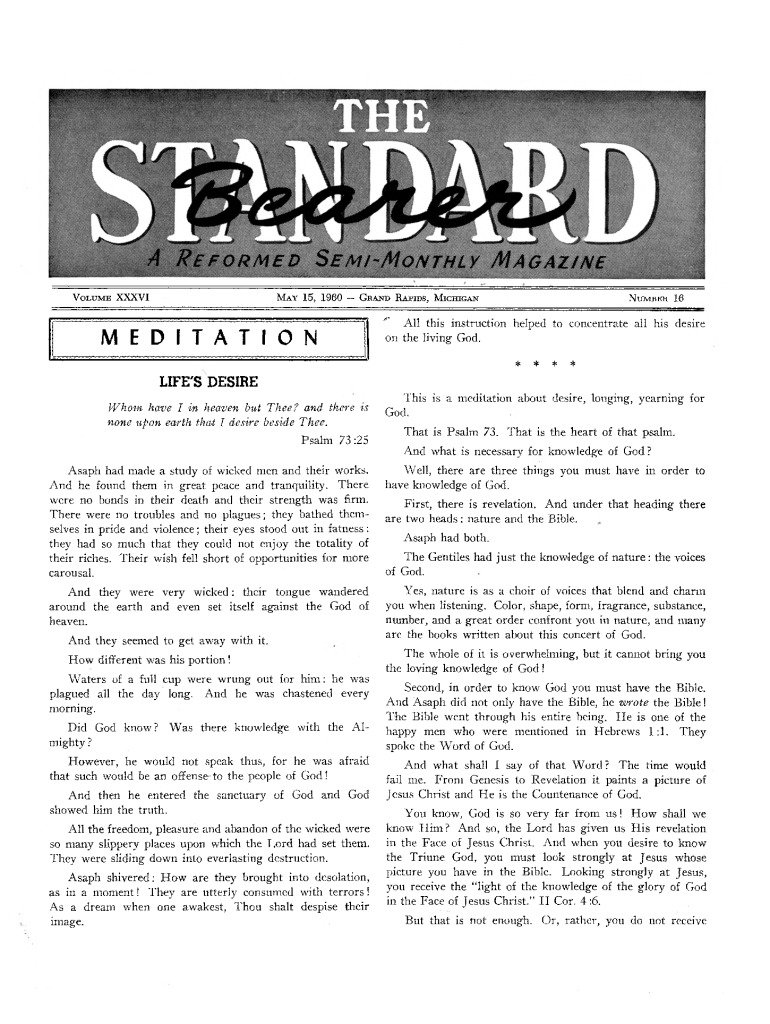