A Letter From Manhattan

It has been several months since the readers of the Standard Bearer have heard concerning our labors in Manhattan, Montana. First of all we may say that we have labored here these several months with great joy and may believe that the Lord has also here given us an open door. Every week we are privileged to preach the Word to a fair and attentive audience of about 70 to 75 individuals. Many, who have become more and more convinced of our sincere desire to lead them into the truth of God’s sovereign grace, as interpreted by our Reformed Standards, have invited me into their homes, to discuss with them more intimately the difference between us and the churches that have so cruelly cast us out. Many of the older ones, when they come to hear us, give expression to their surprise, when they may again hear ‘de goede oude gereformeerde waarheid.’ They understand and love the Reformed truth, and for that very reason are dissatisfied with the condition of the Christian Reformed Churches. I know there are many others that would rejoice with us in the unadulterated truth of the Word of God, but who hesitate or are afraid to come because they have been warned and admonished to have nothing to do with us and our doctrine. When these people rightfully inquire of their elders or of their pastor concerning our Protestant Reformed Church, or about the ‘mysterious’ Three Points, then I do not believe there is an elder that can give them an intelligent answer, and the pastor shamefully hides behind the old alibi, “these things have been discussed so much and have been threshed over and over again, that he does not consider it worth his time to discuss them anymore.”

I regret, more than I can say, this Romish popery of warning the people against our person and doctrine, without telling them the reason why. Making every possible attempt to keep them from the pure unadulterated preaching of the Word of God. Lest we should be accused of laboring in secret, which we never do, we made it a point to first call upon the pastor and also the consistory, to assure them, that in all our labors in their midst, we were constrained by the love of Jesus Christ and only sought the true spiritual welfare of Zion. That it was not our purpose to raise discord and sow the seeds of dissatisfaction in their midst, but to promulgate the truth of God’s sovereign grace, from which their church had officially departed since 1924. Time and again we have attempted, to openly discuss these issues. First with the pastor and also with the consistory, but all in vain. Finally we challenged the pastor to an open debate, (See an “Open Letter to Rev. A. H. Bratt,” in this issue) but also this has remained unanswered to this day. Why can we not have a thorough and brotherly discussion concerning these vital issues? Why can we not join the churches in the Netherlands in a very lively debate on this question? Why must the coming of Prof. K. Schilder be boycotted? Why is the Rev. H. J. Kuiper afraid of a revival of the ‘Common Grace’ controversy? Why do not some of the leaders of the Christian Reformed Churches, who secretly agree with Dr. Schilder, Greydanus, De Graaf and others, of which there must at least be some, come out into the open? Is it because there is a consensus of opinion in this matter? Not according to the official declaration of the Synod of 1924. We read in the official acts of the synod of 1924 the following exhortation: “But to urge the leaders of our people, both ministers and professors, to make further study of the doctrine of Common Grace; that they give themselves account carefully of the problems that present themselves in connection with this matter, in sermons, lectures and publications. It is very desirable that not a single individual or a small number of persons accomplish this task, but that many take part in it.” In another connection we read: “Participation in such a discussion must be general as possible and must not be limited to a single group of churches.” What shall we say concerning this exhortation in the light of recent history? In one word it is sheer hypocrisy. Why was such a task never undertaken? Why is it that when an esteemed and honorable theological Professor of Kampen, makes further study of the doctrine of Common Grace, and carefully gives account of the problems that present themselves in connection with this matter, is placed under a cloud of suspicion, and a shameful attempt made to boycott his contemplated tour of our shores? I am more than ever convinced that the synod of 1924 and the Christian Reformed Churches of today, were not then and are not today, vitally interested in the truth. They are more interested in denominational security than in the welfare of Zion, in temporal ease and wellbeing than in the truth of the Word of God. This attitude literally permeates the Rev. H. J. Kuiper’s editorial in The Banner concerning Dr. Schilder’s contemplated visit. We are sorry to say that this dictatorial and popish attempt to frustrate Dr. Schilder’s visit has had its desired effect here in Manhattan. After being presented to the congregation in such a way that everyone could feel that his visit was not very welcome, the matter, after a heated discussion, was dropped. O, such hypocrisy! On the one hand an exhortation to make further study of the matter, but woe unto the man, or group of men, that set themselves to the task.

Since the first of November we have been meeting in a building of our own. The first few months of our labor here we conducted services in a country school- house. These services were conducted every Friday and Sunday evenings. Every Friday afternoon after school hours we would arrange the room and place the chairs, which an accommodating mortician from Bozeman, about 20 miles distant, had loaned us, and early every Monday morning we would again rearrange the room for school. In the meantime we looked about for a better and more permanent meeting place. This was quite a problem, however, in this community. The ‘Holland Settlement’ as it is called here, is located right out in the country, approximately ten miles from any town or village, and of which Churchill, upon which the Christian Reformed Church is located, is the ecclesiastical and geographic center. Besides the church and Christian school there are about ten or twelve homes and one store building. This store building had been vacant for about four years, it now being used for storage purposes. We made arrangements to buy this vacant property and then proceeded to clean out the interior and give it a coat of paint, and made a few alterations. Then came the problem of seats. We heard of some benches, which had formerly adorned the court room in the old courthouse in Bozeman, which we could buy for a reasonable sum. These we placed in our newly acquired quarters, and when all was completed we had a meeting place of which we could justly be proud. In this we must say the Lord had certainly provided. Even before we left for Manhattan there were several that remarked to us that we would not be able to find a place to meet, and we must admit that this caused us more than little concern, but also in this the Lord has put us to shame.

Besides preaching the Word Sunday and Friday evenings we have just begun with a series of meetings for men and young men who are interested in discussing reformed doctrine in general and the issues of ‘Common Grace’ in particular. These meetings are held each Monday evening and it is our purpose to have as much free discussion as possible. We also distribute a hundred copies of each issue of the Standard Bearer and many are following the articles of Rev. H. Hoeksema written against Rev. D. Zwier with great interest.

It is still somewhat early to form an opinion concerning the possibilities of organizing a Protestant Reformed Church at this place. Neither is this really the most important question. We are thankful that the Lord has given us the opportunity to preach the Word at this place, and that the hearts of many are being comforted and strengthened in the truth of God’s Sovereign grace. It is our calling to plant and to water, and for the rest we will commit the work of the Lord unto Him, Who alone can give the increase, knowing that our labors are never vain in the Lord. 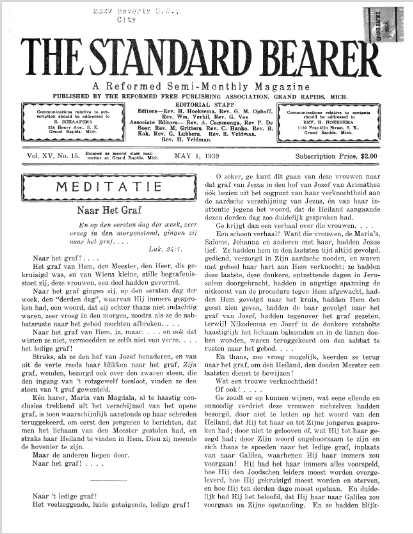