A Goal in the Philippines: Self-Propagating Churches (2)

A self-propagating church, as we noted last time, is one that is faithful to the great commission. She is mission minded. She is busy in the work of spreading the precious truths of the gospel in her own land and to her own countrymen.

Last time we saw that certain pitfalls must be avoid­ed, especially as regards the use of foreign funds. We now turn to the positive aspects of working toward the goal of establishing such churches.

The first step in establishing a self-propagating church is to teach the truth. The church needs to be firmly grounded in the truth that she will pass on to others. Before a church can correctly propagate the truth, she must thoroughly embrace it. She needs to know and identify herself with the truths of Scripture and the Reformed faith as set forth in the historic con­fessions of the Reformed churches. Without this, it is impossible for a church clearly and faithfully to witness to others.

Next, such churches must be taught to be self-prop­agating. The missionary needs to make clear to those among whom he labors that they too must be mission minded. They must learn to take up the work that Christ gave His church in the great commission. They may not be selfish with the Word that God has entrust­ed to them, but should spread that Word wherever the Lord gives open doors. They must seek the salvation of the lost sheep of Israel by faithful proclamation of the gospel among their fellow countrymen.

Closely connected to this is the task of teaching the churches that a significant part of being self-propagating is to finance and support one’s own mission work. Reliance on foreign funding must be avoided. Ideally, outside funding should be kept at zero, and that from the very start of the mission work.

This approach is biblical. The Word of God sets before us the biblical principle that he who brings the Word should be provided for by those to whom he brings it (Matt. 10:9-10). The one who preaches the gospel should live of the gospel (I Cor. 9:14). The ones to whom the Word is preached must provide all good things to the one who preaches it (Gal. 6:6).

Simply put, this means the local church is respon­sible for supporting its own minister and its own mis­sion work. As the Lord gives the members earthly gifts, they must use these things to seek first His kingdom—especially by providing, to the utmost of their ability, for the support of those who preach the Word to them, and to others on their behalf.

The example of the New Testament church con­firms this. We do not find in Scripture that ministers or missionaries were supported by outside sources. One recorded instance of financial assistance being given from one church to another was the gift from the church in Antioch to the church in Jerusalem. But that was given on account of famine, and thus as benevolence assistance. It was not given as support for the Jerusalem church’s ministry or evangelism. The testimony of Scripture is that the newly established churches were the ones who supported their ministers and missionar­ies (Phil. 4:16; II Cor. 11:8-9).

It is true that without financial assistance a church might not be able to do as much in the area of evan­gelism and missions. In many instances, foreign funds would enable the work to advance at a faster rate. But such potential progress should not be pursued at the risk of long-term damage to the field. The wise and biblical approach, in order to avoid the pitfalls that result from paying local men to do the work, is that the churches be self-propagating by means of their own funds.

Rev. Joel L. Hogan, in the article we referred to last time (“Unhealthy Dependency vs. Sustainability”), put it this way:

I have a theory which has never proven wrong, in my experience. My theory is that God has supplied to every people of the world all that they need to live as a com­munity of faith and to spread the gospel to others. No outside resources are needed for these very basic tasks. Yes, additional resources can truly enhance what a group can do, but it doesn’t need to be dependent upon any entity other than Almighty God to be the church and to expand the Kingdom.

We know and confess that God is sovereign. He knows His elect, and He knows where He has placed them in the world. In His providential control of all things, He sends forth His Word through His church. And in His providential control, He will also provide that church with the means it needs to bring that gospel to His elect in that place. God will do that for the sake of the salvation of those He has ordained unto eternal life.

But the question is, Will this actually work? Can we expect young churches that are at a lower financial level to be able to do the mission work the Lord calls His church to do, to do it effectively, and to do it without financial assistance from others?

Another account from Rev. Hogan shows that, by the grace and blessing of God, it is indeed possible—even in very poor countries in the world. His story is about a Presbyte­rian church in India.

This is a large church of about 500,000 members and is in one of the only areas in all of India where Christians are in the majority. The per capita income of these people is about 15,000 Indian Rupees per year, or about $300 per year. How­ever, when I visited their place, I saw some very nice church buildings. The people … told me that these were “rice churches.” They explained that families set aside one fistful of rice at every meal and that is given as a part of their offering and used to build church buildings. Even more striking is that this group of churches uses 46% of all their collections on missions. They support 1400 missionaries, who mostly serve in various parts of India, but extend to other countries in Asia, to Africa, and even to the United States. They also built their own hospital, have their own missionary training school and their own seminary. They are not dependent on outside resources to build their buildings or to be engaged in sending missionaries, yet they have a low income and mainly live by farming.

Yes, the Lord provides His church with the resources she needs. The Lord blesses the church that trusts in and relies on Him, and enables her to be self-propagat­ing.

This is not a new idea or perspective. It is an ap­proach that is well documented in the writings of various missionaries and missiologists, such as Roland Allen (The Spontaneous Expansion of the Church), John L. Nevius (The Planting and Development of Missionary Churches), and J. H. Bavinck (An Introduction to the Science of Missions), to name a few. Much of what these men wrote arose out of their own experiences on the mission field. They saw the problems that arose from injecting foreign funds into the work. They admitted that mission endeavors have depended too much on paid work­ers. They noted that Paul did not pay co-workers, but depended exclusively on spontaneous and voluntary help. They warned that the church that is doing mission work must be constantly on guard against being a source of funds.

In conclusion, the whole sub­ject of self-propagating churches underscores the fact that there is always a need for local men to be called and trained so that they can serve as ministers and missionar­ies of the Word. No church can be self-propagating without this. Not only, therefore, do we need the Lord to direct the churches among whom we labor in the Philippines to continue working diligently in missions and outreach, but there is always the need that He also continue to raise up local men in those churches (in addition to the one brother who will soon return here from seminary, the Lord willing) to serve as their pastors and mission­aries.

In the Protestant Reformed churches and circles we regularly pray that God will raise up young men from among us to serve Him in the high calling of the min­istry of the gospel in our midst. May we also remem­ber to pray for this with regard to the churches in the Philippines. And may the Lord of the harvest hear and answer and provide. 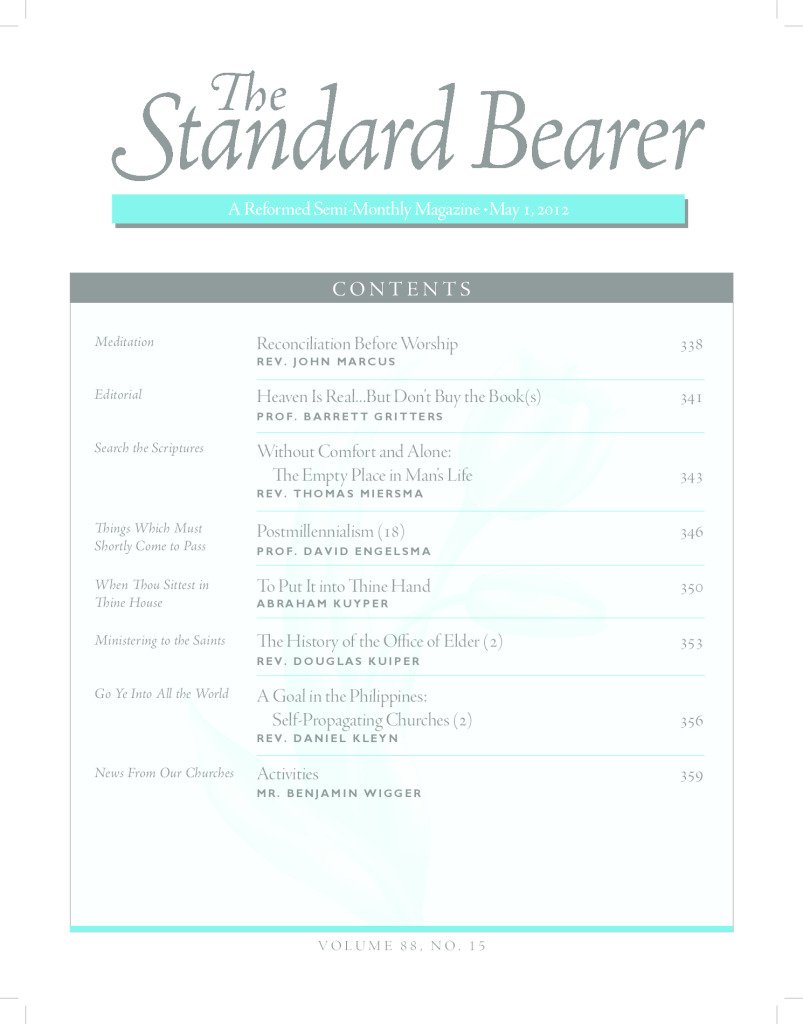