A Generation Which Knew Not the Lord

A Generation Which Knew Not the Lord

And also all that generation were gathered unto their fathers: and there arose another generation after them, which knew not the Lord, nor yet the works which he had done for Israel. Judges 2:10

Knowing God—that is what the Christian religion is all about. To know God is unspeakably blessed. As Jesus says in John 17:3, it is eternal life. It is the spiritual knowledge of faith whereby we love God. Knowing God we delight in Him; we walk with Him; we serve Him.

So the children of Israel had been led into the land of promise by the hand of their faithful God. Knowing God, that He was with them, that He was their help and their strength, they had gone from victory to victory conquering the wicked inhabitants of the land. The context here mentions that “the people served the Lord all the days of Joshua, and all the days of the elders that outlived Joshua” (v. 7). But then it seems Israel began to change rapidly for the worse, and we read these tragic words: “there arose another generation after them, which knew not the Lord.”

These words ought to provide us with a word of warning and encouragement. We live in times of widespread doctrinal indifference and woeful ignorance of what the Bible teaches. Many have lost their commitment to provide Christian education for their children. Solid, systematic instruction in catechism classes is almost a thing of the past. Expository, exegetical preaching is widely despised. Opportunities for Bible study and discussion are often neglected.

As our covenant youth again take up their studies, as catechism classes soon resume, along with our Bible study societies, let us together resolve to know the Lord and to pass on that knowledge of God and His wondrous works to every generation following!

Of course, all through history one generation succeeds another. That is also the case in the generations of God’s people. Now in Israel, Joshua and those of his generation passed away. It had been, generally speaking, a God-fearing generation. Joshua had constantly held before the people the way they must go. Now a new generation was on the stage of the history of Israel. As we know, apostasy does not happen overnight. Gradually the previous generation had died and there had been the rise of the next generation. How can it be that already in the next generation they knew not the Lord nor the works He had done for Israel?

Certainly God is faithful to His covenant from generation to generation. He has promised that in the way of the instruction of their children by God-fearing parents the children will know Him and His wondrous works, “that they might set their hope in God, and not forget the works of God, but keep his commandments (Ps. 78:7). This plainly shows that the fathers had failed to instruct their children as they should have in the truth of God and His wonderful works.

Now, our text does not mean that they knew nothing about God and His works. But, unlike the previous generation, they had not witnessed the acts of God; they had not lived that history. And they did not acknowledge the events in their history as being the works of God. They denied that they were now in possession of the land only because of the wonders of God’s power. They, in pride, viewed it all as human achievements. Just as Moses warned they would, the people boasted in their hearts, “my power and the might of mine hand hath gotten me this wealth” (Deut. 7:17). It is no surprise then that they no longer considered the conquest of Canaan to be the Lord’s battles carried out according to His commands. They would, rather, do what was convenient and expedient. It was certainly easier for them not to drive out the remaining Canaanites from the land. And soon enough they would make common cause with the Canaanites and be attracted to their idols.

No, this generation was not ignorant of Jehovah. They knew about Him alright. Even from their tradition in the midst of this people it was quite impossible to be totally ignorant of Him. Even the heathen nations round about knew of Jehovah, and they feared Him. But this new generation did not want to retain Jehovah in their knowledge. And after this period of the history of the judges, they will desire a king like all the nations around them. Already they would desire gods like the nations round about them that they allowed to remain in the land.

The following context here speaks of the fact that they forsook the Lord and served Baal and Ashtaroth (vv. 11-13). This does not imply that it was an absolute disavowal of Jehovah. Israel did not blatantly proclaim, “Jehovah is not God; Baal and Ashtaroth are the only gods.” It is plain that throughout the days of the judges Jehovah was known and served also. But the people became very open-minded and tolerant. They would insist that Jehovah was God, but they would also recognize the gods of the nations and worship them. It was a dismal picture indeed!

The Lesson for Us

We live in a society that, like the new generation in Israel, promotes open-mindedness and tolerance. Much of the nominal church today likewise is all too ready to compromise both with respect to doctrine (the knowledge of God) and life (how He is to be served). There is often little interest in learning and understanding the truth of Scripture. Many, young and old alike, are bored by doctrine or content with a very superficial knowledge of the truths of the Reformed faith. They are quick to argue that we must not be so narrow-minded. We must be open to different interpretations of the Bible.

The same attitude is often found with respect to lifestyle. Yes, it will be admitted that the older generation had strict views with regard to movies, worldly entertainments, modesty in dress, and Sabbath observance. But we need not be so narrow-minded, so old-fashioned. They insist that we have liberty to use or participate in many things that were formerly condemned. They will serve the Lord, they say, but at the same time they go running after the gods of pleasure, lust, worldly fame, and success.

Where is the antithesis to be seen? For the children of Israel, it meant obedience to God’s command to wipe out the nations of the Canaanites in the land. They began well, but they failed to finish the task. And the Canaanites remaining in the promised land became as a snare to Israel. Soon they were tempted to join with them, intermarry with them, and worship their idols. How urgent it is for us and our generations to live antithetically—living in this world but in spiritual separation! Departure into apostasy can take place from one generation to the next. Some may see it happen even in their own families.

All this comes down to a failure of parents in instructing their children in the knowledge of the Lord and His wonderful works. Not that there was no such instruction, but there must have been a carelessness, a laxity in providing that instruction on the part of many. “For there arose another generation after them, which knew not the Lord, nor yet the works which he had done for Israel.” Certainly the passing generation knew the Lord and His works for the children of Israel. And Israel had the clear command of Jehovah to teach their children the fear of the Lord and His wonderful works on their behalf. But they fell far short in providing the necessary instruction and discipline for the next generations!

And we must maintain and never waver from the commitment to provide Christian education for our children. In all their learning they must learn the knowledge of the Lord! How thankful we must be for godly teachers who assist us in this task.

But at the heart of it all is the home. Let us examine ourselves in this regard. Is the Word of God at the center of our homes? Do we consistently read and discuss the Word together as a family? Not just going through the motions of devotions, but with understanding that our children might grow in the knowledge of the Lord and His wonderful works? Do we see that they are well prepared for catechism? Are we reading edifying books and literature in our homes? Do we read the Standard Bearer and Beacon Lights and see that our children and young people do too, according to their abilities? Are we setting a proper example for our children in preparing for and regularly attending our Bible Study or Society? Do we wisely limit the time spent on entertainment and sports? Are we showing our children our own love and concern for the knowledge of God and the things of the kingdom by how the family money is spent? Do our children see that we are willing to sacrifice for the sake of the truth? Are we consistent in showing the younger generation the seriousness of sin and disobedience? Do we lead them in the way of true sorrow for sin and repentance, in the way of forsaking sin and fleeing from temptation?

In all these things we are concerned with the knowledge of the Lord! Jehovah Himself says, “My people are destroyed for lack of knowledge; because thou hast rejected knowledge, I will also reject thee, that thou shalt be no priest to me; seeing thou hast forgotten the law of thy God, I will also forget thy children” (Hosea 4:6). Let us not grow lax in our calling to pass on the knowledge of God and His wonderful works to the coming generations. And to the extent that we have and do fall short, let us repent, and let us reaffirm our covenant vows assumed at our children’s baptism! Let us seek God’s grace and wisdom from on high to teach and live the truth, showing in word and deed who He is whom we serve! And, “let children thus learn from history’s light to hope in our God and walk in His sight!” 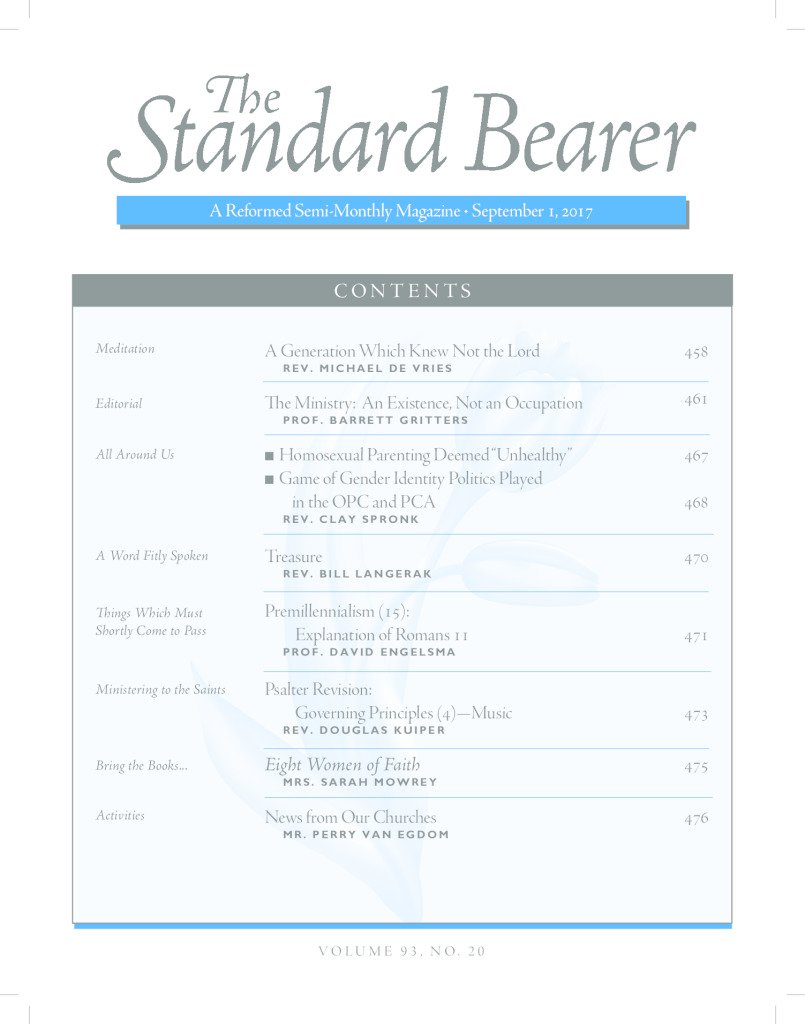