A Fly in the Ointment?

A Fly in the Ointment?

Thus far the Standard Bearer has not commented editorially on the movement—chiefly in Christian Reformed circles—to establish the Mid-America Reformed Seminary in northwest Iowa. From a formal, church political viewpoint this is largely an in-house affair for the Christian Reformed denomination; and if that denomination wants to tolerate a so-called alternative seminary, that is their affair. Personally, I do not believe that the establishment and operation of a seminary of any kind is the proper work of an association, no matter how homogeneous such an association may be. I have always believed that the work of a seminary is a phase and an extension of the work of the preaching of the Word, and that as such it is the work of the church institute, not of a society. Nor can appeal be properly made in this connection to the example of the Free University of Amsterdam in the Netherlands. It is true, of course, than an arrangement was made between the Dutch churches (GKN) and the Free University whereby graduates of the latter could become candidates for the ministry; nevertheless, this was not and is not the primary purpose of the Theological Faculty of the Free. It is designed to teach Theology as a science and to grant degrees therein, just as are the various other faculties in the university, such as Law, Philosophy, or Medicine. Besides, of course, over the years-putting aside the issue of how effective they have been-there have always been supervising deputies of the General Synod of the GKN to exercise oversight over the Theological Faculty of the Free to the extent that it served as a source of candidates. So that relationship is different. Nevertheless, the Christian Reformed Church in the past has always accepted graduates from other seminaries (Westminster, for example), provided they did their so-called year of penance at Calvin Seminary before they became candidates. From that point of view, the new Mid-America Reformed Seminary could, I suppose, be granted the same status.

Nor do I believe that the establishment of an alternative seminary is the proper and honorable way to follow. After all, the underlying motivation for this movement is dissatisfaction with the denomination’s official seminary. Why, if there is such dissatisfaction and doubt concerning the orthodoxy of Calvin Seminary, do not these loyal Christian Reformed men make an issue of it and demand that there be an official investigation conducted, and, that if the outcome of said investigation reveals heretical teachings, there be a purge? An example might be that of the investigation which was instituted in 1920-’22 into the instruction of Dr. Ralph Janssen, which led to his deposition because of his erroneous views concerning the inspiration and infallibility of Scripture. Merely to establish an alternative seminary will not prove to be a solution to the alleged problem; and I predict it will not even serve ultimately to preserve a kind of island, or enclave, of orthodoxy in the Christian Reformed denomination.

But even worse, in our opinion there is already a fly in the ointment.

Recently there came to my attention a copy of the proposed Catalogue of the new Mid-America Reformed Seminary. And in it one of the professors-elect is Dr. David W. van Gelder, a graduate of Calvin Seminary and currently at Erskine Theological Seminary. Along with this Catalogue, I received a paper written by Dr. van Gelder, entitled “The Judgment On Women (an analysis of Genesis 3:16).” As the title suggests, the paper is concerned with the meaning of the judgment pronounced upon the woman in Genesis 3:16, “Unto the woman He said, I will greatly multiply thy sorrow and thy conception; in sorrow thou shalt bring forth children; and thy desire shall be to thy husband, and he shall rule over thee.” The paper deals especially with the last part of the verse quoted, and especially with the expression, “and thy desire shall be to thy husband.”

Now my concern in this editorial is not with Dr. van Gelder’s interpretation of that expression as such, although I would not agree with it.

My concern is rather with his view of this entire passage. Vs. 16 is part of the entire passage in Genesis 3 which records the judgments pronounced by the Lord after the fall of Adam and Eve. Permit me to quoteGenesis 3:14-19: “And the Lord God said unto the serpent, Because thou hast done this, thou art cursed above all cattle, and above every beast of the field; upon thy belly shalt thou go, and dust shalt thou eat all the days of thy life: And I will put enmity between thee and the woman, and between thy seed and her seed; it shall bruise thy head, and thou shalt bruise his heel. Unto the woman he said, I will greatly multiply thy sorrow and thy conception; in sorrow thou shalt bring forth children; and thy desire shall be to thy husband, and he shall rule over thee. And unto Adam He said, Because thou hast hearkened unto the voice of thy wife, and hast eaten of the tree, of which I commanded thee, saying, Thou shalt not eat of it: cursed is the ground for thy sake; in sorrow shalt thou eat of it all the days of thy life; Thorns also and thistles shall it bring forth to thee; and thou shalt eat the herb of the field; In the sweat of thy face shalt thou eat bread, till thou return unto the ground; for out of it wast thou taken: for dust thou art, and unto dust shalt thou return.”

Now what is Dr. van Gelder’s view of this passage?

According to him it is a poem!

He writes as follows on page 3 of his paper:

The immediate context of verse 16 is the poem which covers verses 14-19. (italics added) Here God pronounces His judgment upon the serpent (14-15), the woman (16), and the man (17-19). What is the judgment upon the serpent? It no longer will be able to occupy a place of esteem—it will be lowered to crawl on its belly and eat dust. The serpent, which is Satan (Revelation 202) is fallen and condemned to a losing conflict with the seed of the woman. It is conflict that will result in defeat for Satan only by the instrumentality of a Redeemer. The judgment of the serpent is, then, both a lowering of status and power and a resulting conflict in which loss is certain. It is a conflict with God (through Jesus Christ] in Whom the serpent originally found its being.

My concern is about the idea that this is a poem, rather than a literal, historical account, or narrative.

Limiting ourselves to this immediate passage, vss. 14-19, for the time being, we may point out that there are only two possibilities here, neither of which is acceptable:

2) Or this is poetry in which we do not have a literal account of real words of the real Lord God speaking in real speech which was “sensually perceptible” (to use the expression of Assen, 1926 in the Geelkerken Case) to the real serpent and real Eve and real Adam, who had real ears to hear these real words. Then there is only a poetic, literary, account here—something which opens the door to all kinds of possibilities of interpretation. Then Dr. van Gelder may have a fairly orthodox interpretation of Genesis 3, but the door is nevertheless opened to all kinds of unorthodox interpretations.

But there are other problems.

And what becomes, then, of the whole position that in the first chapters of Genesis we have a literal historical narrative of real events and real persons?

To my mind, the Mid-America Reformed Seminary already has a fly in its ointment, a fly which will “make the ointment of the apothecary to stink.”

The ironic aspect of all this is that it is precisely this matter of the interpretation of the first part of Genesis which has been the occasion of criticism of and dissatisfaction with Calvin Seminary and in connection with the rejection of the candidacy of a Mr. Libolt. 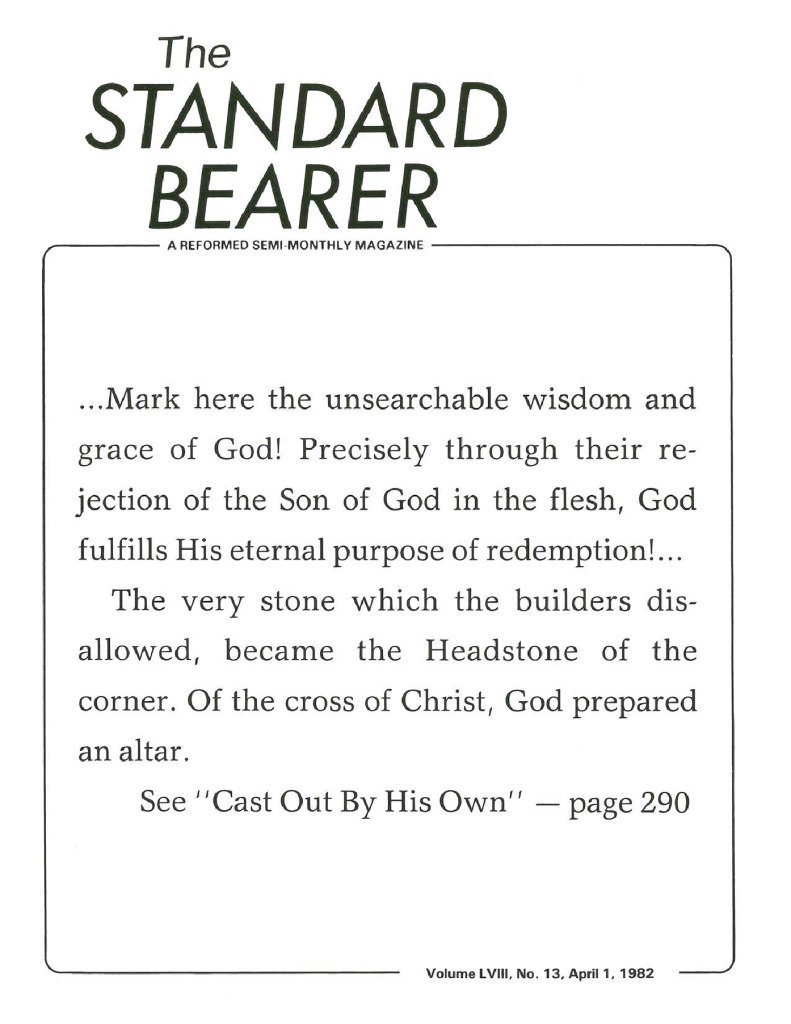