A Definition of Gospel Preaching: Calvinistic or Arminian?

A Definition of Gospel Preaching: Calvinistic or Arminian?

I think the right method of preaching is this. At our first beginning to preach at any place, after a general declara­tion of the love of God to sinners
and his willingness that they should be saved
, to preach the law in the stron­gest, the closest, and the most searching manner possible; only
intermixng the gospel here and there, and shewing it, as it were, afar off…. I mean by preaching the gospel, preaching the love of God to sinners,
preaching the life, death, resurrection, and intercession of Christ, with all the blessings which in consequence thereof are freely given to true
believers.1

Who said these things? Who presented this as his view of preaching and his definition of preaching the gospel? Who here begins his statements of gospel preaching as a declaration of a uni­versal love of God for all men absolutely (common grace) and His will or desire to save everybody (free offer)?

It was not free offer advocates like Louis Berkhof, Phil Johnson, Iain Murray, or John Piper. It was that arch-Arminian John Wesley (1703-1791)!

Even more than Jacob Arminius himself, Wesley has probably done more to further Arminianism than any other man. Through the 40,000 plus sermons he preached in Great Britain, Ireland, and America; his vast writings (including his sermons, journal, and Notes on the New Testament), totaling 32 volumes in one

edition; his Arminian hymns (along with those of his brother, Charles) sung all over the world; the many min­isters his movement produced, including lay preachers and women preachers, on all continents; the many soci­eties and churches he established or spawned across the world—Wesley has promoted global Arminianism more than any other.

He provided the seeds not only for the Methodist movement and other Arminian churches, but also for the Holiness movement (for his Arminianism led him to em­brace and promote perfectionism), as well as for Pentecos­talism and Charismaticism (which are typically Arminian and which develop Wesley’s endorsement and promotion of charismatic phenomena, such as dreams, visions, heal­ings, “gifts,” etc.), with their many respective churches and numerous denominations across the world.

No wonder Wesley had to “gut” the Thirty-Nine Ar­ticles, the confession to which he was sworn as an Angli­can minister! His unfaithfulness to his ordination vows and creed have also been widely followed throughout the church world. Many are the ways in which he has sought to undo the Reformation! The wise words of Solomon certainly apply to John Wesley: “almost in all evil in the midst of the congregation” (Prov. 5:14).

Centuries after his death, Wesley continues to be the darling of millions of Arminians and even, sadly, pro­fessed Calvinists, the world over. The latter would have especially pleased him for he hated the gospel of particu­lar grace, calling it a “blasphemy” that represents “God as worse than the Devil, as both more false, more cruel, and more unjust.”2

John Wesley sought to weaken and destroy the truth of the sovereignty of God in any way he could, even re­sorting to condensing, distorting, and falsifying Augustus Toplady’s 134-page book Absolute Predestination into a 12-page tract, ending with these scurrilous words: “The sum of all is this: One in twenty (suppose) of mankind are elected; nineteen in twenty are reprobated. The elect shall be saved, do what they will; the reprobate will be damned, do what they can. Reader believe this or be damned. Witness my hand, A- T-.” Toplady neither wrote nor held any such thing. Wesley biographer Stephen Tomkins is right: “Now this fraud had proved [Wesley] a criminal worthy to be transported to America if not hanged.”3 Toplady understandably declared of John Wesley: “I believe him to be the most rancorous hater of the gospel system that ever appeared in England.”4

Earlier in the letter from which the quotation at the very beginning of this article was taken, Wesley rightly declares that the nature of the gospel to be preached is a “very important” issue: “I have had many serious thoughts concerning it, particularly for some months last past; therefore I was not willing to speak hastily or slightly of it, but rather delayed till I could consider it thoroughly.”5

And what was his conclusion? The Arminian Wesley does not here define the gospel as universal atonement or the opportunity that man can be saved if he uses his free will aright. Rather, Wesley, after “many serious thoughts” and “some months” of thorough consideration, distils and defines the Arminian gospel as “a general declaration of the love of God to sinners and his willingness that they should be saved”—the very gospel of common grace and the free offer so beloved of many professing Calvinists! 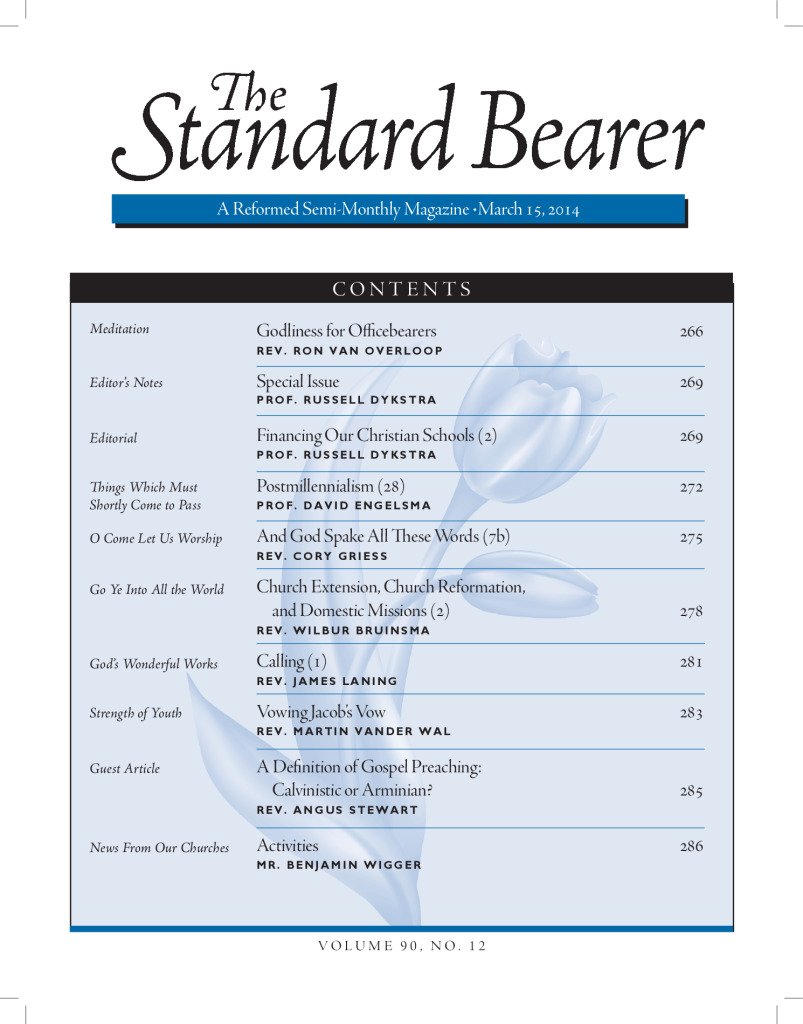