At the time when our synod was held and when, therefore, as many of the editors of the Standard Bearer were in Grand Rapids as could ever be expected, the president of the staff, the Rev. G. M. Ophoff, called a meeting of the editorial staff for the purpose of discussing the desirability of changing the setup of our paper and introducing possible improvements.

The meeting was held on May 26, in the consistory room of the First Protestant Reformed Church of Grand Rapids.

Present were the editors, the Revs. G. M. Ophoff, G. Vos and the undersigned; the associate editors the Revs. P. De Boer, G. Lubbers, B. Kok, C. Hanko, A. Petter, J. Vanden Breggen, R. Veldman; and also the brethren Revs. J. De Jong and M. Schipper, who had been invited to attend the meeting.

Several of the editors were absent, of course. Nor had they been notified of the meeting. In so far the meeting was rather irregular, although this was entirely due to circumstances. Because of the distances that separate us, it is quite impossible ever to convoke a full meeting. The time of Synod was considered the best opportunity to get together as many as possible. And the meeting was called at a short notice. Besides, some of the absent brethren had already voiced their opinion as to desirable changes in the organization of the Standard Bearer. However, if some of the brethren that could not be present at the meeting of May 26, should have very serious objections to the decisions taken, they should still reveal them, in order that they may be discussed at our next meeting.

The decisions that were taken are rather radical. But they were taken unanimously.

The proposal was made by the Rev. C. Hanko to change the editorial staff in such a way, that there be henceforth only one editor, who is to be held responsible for the entire contents of our paper. This editor, therefore, is to have dictatorial powers, for you cannot have all the responsibility unless you have all the power. He is to outline the entire contents of each issue and assign to each associate his particular task: how much space he has to fill, in what language he must write, the subject he is to discuss, the time his copy must be delivered.

This was a rather radical change and a bold proposal.

One had to get used to the idea, to get over the first shock.

Especially the undersigned, who had reason to fear that he would be vested with these dictatorial powers, could see several objections to such a plan. For, when responsibility and powers are increased, the burden of work becomes heavier accordingly.

However, the proposal was offered in the form of a motion and it was supported. In the course of a long discussion the idea appeared to receive more and more support and to grow in favor with the brethren present.

The undersigned finally suggested an amendment to the effect that an annual meeting of the staff should be held, and that at this annual meeting the editor should come with a definite proposal outlining the entire contents of the Standard Bearer for the ensuing year, so that at that meeting the definite task for that year might be assigned to all the co-workers.

The result was that the following resolution was adopted: “It is decided to give the paper in the hand of one editor, and to appoint assistant editors for a specified time. The editor is to have control over the entire contents of the paper, provided that at each annual meeting he come with a definite proposal outlining the contents of the paper for one year.”

Further it was decided so to change the language of our paper, that henceforth, i.e. until further changes are made, two thirds of the space shall be given to material in the English language, one third to the Holland.

And undersigned was appointed editor. 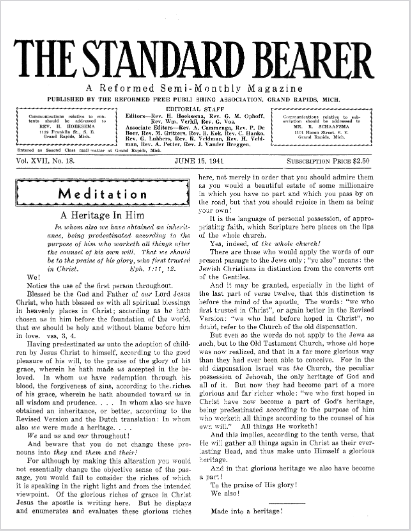