A Critique of “Reformational” Views on Revelation (2)

A Critique of “Reformational” Views on Revelation (2)

Some of our young adults attend Neo-Calvinistic colleges (e.g., Calvin College, Dordt College, Trinity Christian College, and Redeemer University), where they are taught what is referred to as theReformational worldview. Although the termReformational sounds like the term Reformed, what is being taught in these institutions amounts to a radical departure from the truth of the Reformed faith.

It is my intention to demonstrate this departure, while addressing just one subject area at a time. At present we are considering the difference between Reformed and Reformational views on the subject of divine revelation.

To make it easier to grasp and to remember some of the main points on this subject, I will set forth one key principle at a time, placing that principle in a text box. The paragraphs that follow that box will serve to provide a further explanation of what was stated in the box. Hopefully this will serve as an aid to understanding and being able to recall some of the key points of difference.

As was brought up last time, the law of God revealed to us in Scripture is complete. God tells us in detail how we must behave toward Him, and what duties we owe to our neighbor. This revelation is perfect and complete in all respects. There is nothing lacking in it whatsoever.

This is our confession as Reformed believers, who from the heart utter the words found in the seventh article of the Belgic Confession: “We believe that those Holy Scriptures fully contain the will of God…. For, since it is forbidden to add unto or take away any thing from the Word of God, it doth thereby evidently appear that the doctrine thereof is most perfect and complete in all respects.”

In the Scriptures alone we find the infallibly inspired Word of God concerning what we are called to do and not to do.

Yet, central to the Reformational worldview is the teaching that the creation makes known to us some laws for human society that are not found in Scripture. Albert Wolters, a professor at Redeemer University College in Ancaster, Ontario, has written a book entitled: Creation Regained: Biblical Basics for a Reformational Worldview. In this work, he argues that we often must turn to the creation, rather than the Scriptures, to discover the will of God: “There are many things about which the Scriptures are silent, but about which we must nevertheless seek to know the Lord’s will.”1

He then goes on to state more specifically what laws he finds to be lacking in the Scriptures: “the universal normative principles that govern cultural and societal pursuits such as journalism, education, advertising, international relations….”2

Wanting to build an earthly, carnal kingdom, they fail to find in the Scriptures the directions on how to build one. So they argue that the creation itself must be the place where we are to find these cultural laws, which they call norms for human society.

It is true, of course, that God does make Himself known through the creation, preservation, and government of the universe. But what He makes known in this way are not additional laws for human conduct not found in the Scriptures. God’s law for us is found in its entirety in His inspired Word.

Some of what has been said so far was brought up last time, but let us go on to consider what it is that God makes known in creation and providence. Consider, for example, an unbeliever who is not aware of the Scriptures. What does God make known to that person by means of His works (i.e., His creation, preservation, and government)?

Through this means God makes known that there is a God, and that He has eternal power. “For the invisible things of him from the creation of the world are clearly seen, being understood by the things that are made, even his eternal power and Godhead…” (Rom. 1:20a).

Furthermore, the unbeliever knows that this eternal God is the one who is providing him with food, clothing, and all that he needs in order to live. Paul and Barnabas made a reference to this when preaching to the heathen at Lystra, who were intending to worship the two of them as though they were gods:

…Sirs, why do ye these things? We also are men of like passions with you, and preach unto you that ye should turn from these vanities unto the living God, which made heaven, and earth, and the sea, and all things that are therein: Who in times past suffered all nations to walk in their own ways. Nevertheless he left not himself without witness, in that he did good, and gave us rain from heaven, and fruitful seasons, filling our hearts with food and gladness,

Acts 14:15b-17.God did not leave Himself without witness. Human beings without the Scriptures can see that there is a God who does good and provides for them the rain from heaven that they need to survive and to be glad.

So they know that there is a God who is providing for them, and they recognize that it is their calling to glorify and thank Him for doing this. Of this they are aware, and God’s judgment comes upon them for refusing to do this: “Because that, when they knew God, they glorified him not as God, neither were thankful” (Rom. 1:21a).

Yet none of this amounts to an additional revelation concerning laws not found in the Scriptures. Rather, it amounts to a manifestation of God that is given to the ungodly, so that even those who have never heard the gospel might be without excuse.

Yet again, what we believers see in the creation are not additional laws for human conduct. Rather, we see profitable illustrations that make known to us the same truth that is recorded for us infallibly on the pages of Holy Scripture.

Reformational teachers say that God has two kinds of laws that He reveals in creation. First there are the physical laws, such as the law of gravity. Secondly, there are laws concerning human society, which they call norms.

We are all familiar with the laws of nature, the regular order in the realm of physical things, of plants and of animals. These include the laws of gravity, motion, thermodynamics, photosynthesis, and heredity—all the “natural laws” discovered by physics, chemistry, biology, and the other “natural sciences.” We are not so familiar with, or feel less sure about, God’s laws for culture and society, which we call norms.3

The “norms” for human society that they speak of are not really laws that man learns from God by means of the creation. Rather, they are laws of man that human beings learn from human society by their experience within that human society. The following quote serves to bring this out:

Each institution has its own distinct nature and creational structure. All of us have some intuitive awareness of that nature or structure, an awareness that experience and study sharpen and deepen into practical wisdom. An experienced schoolteacher is likely to sense the normative structure of the school more clearly than does the average parent. Someone who has worked for years in a service organization is apt to know the creational contours of that area much better than does an academician or politician. Each area of societal organization develops its own widely accepted standards of propriety, and anyone who departs from them earns such labels as “unprofessional” or “unbusinesslike.”4

Here we see that these norms are not laws of God, but the “widely accepted standards” of men. Such standards we do in fact learn from experience, and we sometimes do follow them, provided that doing so would not constitute a sin. But when doing this, we at the same time recognize that what we are abiding by are simply the human customs in our current time and location.

Laws of God and human customs are not the same. Laws of God apply to all human beings. But these “norms” are human standards that vary from culture to culture. Proper business practices in one country may differ from those in another country. Furthermore, what was considered proper fifty years ago may not be the same as what is considered proper today. The standards of a certain people apply to those people, and are often in a state of flux. In contrast, the laws of God apply to all human beings, and remain the same year after year. 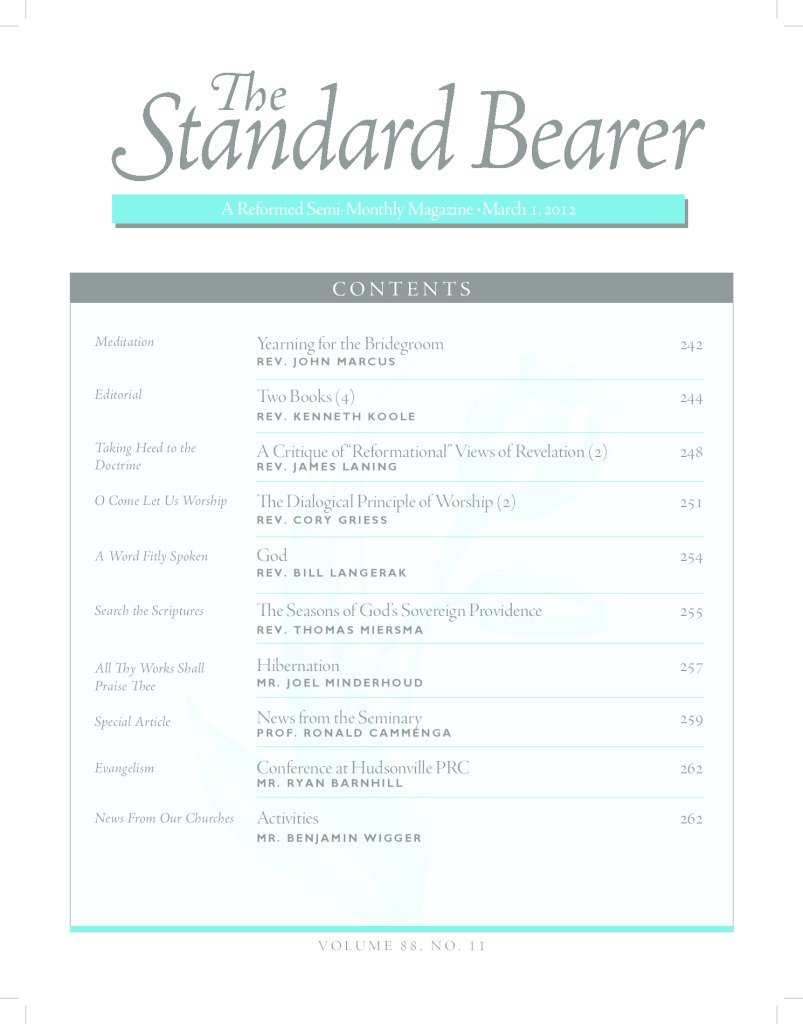