A CRC Committee Proposal for Approval of Same-sex Marriage

A CRC Committee Proposal for Approval of Same-sex Marriage

It comes as no surprise, of course.

A Christian Reformed study committee (this one rising out of a classis) recommends approving same-sex marriage, which proposal its classis adopts with a view to bringing it as an overture to Synod.

In light of all the other unbiblical positions the CRC has adopted over the last several decades, it was only a matter of time for one of its broader assemblies to decide that the time had come to revisit this issue too.

What has governed the CRC assemblies over the last number of decades has been their extreme sensitivity to social pressure, and conforming to it.

As stated in a previous SB article, it is called ‘the fear of men.’

What does ungodly society object to? What does our society find objectionable about the historic Christian faith and its practices? What will earn their approval? And what will they curse and ridicule?

This was what prompted the leading lights of the CRC to adopt the notorious “Report 44” in 1972, which gave approval to ‘reinterpreting’ Genesis 1-3 and its ‘primitive’ creation account. The report, based on the new (liberal) hermeneutic, in essence assured scientific society that the theory of evolution was acceptable to CRC scholars and its more educated members.

This was behind the CRC’s decisions of the 1980s and 90s to open its church offices to women. God forbid that the denomination should incur the wrath of the feminist movement and be charged with discrimination.

Today the great social issue is recognizing the homosexual population in the interests of granting its practitioners equal rights in all human practices and relationships.

And if one opposes such ‘inalienable rights,’ one is to be numbered with the haters and bigots. Such ‘Christianity’ is reviled.

In this context comes the report of a CRC classical committee expressing its support for same-sex marriage.

In 2014, in response to a consistory’s overture, Classis Grand Rapids (GR) East appointed a study committee, giving it the mandate “to examine and summarize the biblical/ theological support currently offered by Christian proponents of same-sex marriage.”

This the committee did, returning to Classis GR East with a report some 140-pages long, which in turn was adopted by the classis with a view to sending it on to synod. We can find no record of the CRC synod acting on it as yet.

What is of interest is that this report was drawn up in Classis GR East while a study committee appointed by the 2013 Synod was working to “Provide Pastoral Guidelines re: Same-sex Marriage.” That committee came to the 2015 Synod with a majority and a minority report. The majority report favored toleration of same-sex marriages and CRC members participating in such ceremonies, basing it on the freedom of the individual conscience. The minority report, on the basis of Scripture, expressed disapproval of CRC members or officebearers having the freedom to show approval of same-sex marriages.

Another committee was chosen to study those reports and come with advice to the 2016 Synod. That committee advised the 2016 Synod to recommend to the churches the minority report. The committee viewed the minority report as “providing a needed balance” to the difficult issue as it called for “sensitivity to the conscience of others [in the denomination]” who would be offended by same-sex marriages (cf. CRC Acts 2016, p. 915; available online).

Synod went on record as favoring the direction proposed by the minority report.

However, that decision is not the end of the matter. Synod 2016 then appointed another study committee, giving them five years to research and report on human sexuality. In addition to being instructed to study the biblical foundations of human sexuality, the committee was mandated to take into consideration “conclusions arising from scientific and social scientific studies” (Acts, p. 916).

The issue of approval of same-sex marriage is not dead in the CRC, not by a long shot. The denomination’s liberal leadership will not allow it to be.

Which brings us back to the Classis GR East report.

While the SB could, as a matter of information, just briefly note that there is now this report loose in the CRC favoring same-sex marriages, and then with grief and dismay simply dismiss it as unbiblical and shameful, we think it worthwhile to acquaint our readers with the report and some of its arguments that seek to justify same-sex marriages (and, by necessary inference, an openly homosexual lifestyle).

Worthwhile, first, because this report presents a fascinating insight into how the unbelieving apostate mind works against revealed truth, and yet for all that, wants to retain the name ‘Christian.’

And second, because in the near future we may well face these arguments in courts of law when we attempt, on the basis of religious convictions, to retain the right to condemn the homosexual lifestyle, teach our children such, and refuse to have our buildings rented for same-sex marriages.

The counter-argument of courts of law sympathetic to gay-rights may well be that our appeal to religious convictions based on scriptural condemnation of such a life-style and with its practices is without substance.

That said, we proceed to give a brief overview of the report.

Referring back to the mandate quoted above that Classis GR East gave its committee, take note of the wording. Note, not “examine… the biblical/theological teaching concerning homosexuality and marriage,” but examine the “support currently offered” by those who approve of (the “Christian proponents of”) same-sex marriages.

In what direction Classis GR East intended its committee to go is transparent. Having reviewed its mandate, the report offers a brief background of the CRC’s dealing with the homosexual issue over the past few decades.

The report points out that, in accordance with a decision taken by the CRC Synod in 1973,

The official position of the…CRC is that any homosexual practice— even with life-long committed relationships—is incompatible with Scripture and in all cases to be considered sin. The CRC calls same-sex attracted individuals to life-long celibacy (p. 5).

It is this position that the committee wants the CRC to reverse.

The report quotes three pastoral guidelines adopted by its 1973 Synod, the third of which states:

Homosexualism—as explicit homosexual practice—must be condemned as incompatible with obedience to the will of God as revealed in Holy Scripture.

The CRC’s present official position, namely, the condemnation of homosexual practice, is clear and, shall we say, straight-forward.

What we find curious is the explicit reference (in the first of the quotations above) to “even…lifelong committed relationships” being disapproved. The impression left is that already back in 1973 some at synod argued that this should be allowed as an exception.

The report goes on to point out,

The CRC’s latest official statement regarding biblical teachings on this issue is now more than forty years old. Classis Grand Rapids East has on two recent occasions unsuccessfully asked Synod for a re-examination of the biblical/theological arguments in the Synod 1973 report.

So, unhappy with synod’s two previous refusals, Classis GR East decided to push its agenda once again, appointing a study committee. Its rational was threefold:

There has been significant theological consideration of these issues since 1973, both in the Reformed tradition and in the wider Christian church. Scientific understanding of same-sex attraction has grown during that time. [And] [i]n recent years, the social and legal landscape has changed considerably….

This perspective gave rise to the mandate for a committee to examine “support currently offered by Christian proponents of same-sex marriage.”

Fleshing the mandate out, the report states that the committee was asked

…to summarize how and where this [current] biblical/theological understanding agrees with, and differs from, the Synod 1973 report. The committee was also asked to summarize recent scientific literature on sexual orientation, and to recommend pastoral approaches and available resources for dealing with same-sex unions within our congregations and communities.

The committee is crafty. This is apparent from the opening paragraph in its “Summary of Arguments” page. It writes,

What the committee wants to avoid at all costs is a debate on the issue based solely on scriptural evidence written black on white. That would be ‘over-simplified,’ they argue. It would become apparent that those in the denomination who oppose same-sex marriage have Scripture on their side, while all that those in favor of same-sex marriage have is compassion, a being governed simply by their feelings, a sympathy for the LGBT in their community who speak of suffering so much due to discrimination and rejection.

The ‘feeling-compassion’ crowd would be at a distinct disadvantage in a debate in a church court based solely on Scripture the committee realizes.

So, this must be avoided.

The committee points the classis (and denomination) in a different direction.

It informs the CRC,

The most convincing arguments made by Christian proponents of same-sex marriage come from weaving together multiple strands [emphasis theirs]. The strength of the overall argument comes from how these different strands reinforce each other. Ten such strands are summarized in this Report…and [then] discussed in greater length…. The final section of this report provides advice on maintaining unity within churches.

One cannot help shaking his head over that last sentence.

Knowing full well that what it is proposing is going to stir-up strife and division, the committee assures the denomination it has advice available on maintaining unity.

“Let truth be taken to the gallows, but understand that we as Christians are the ones interested in unity!”

So, a multi-strand approach, an approach with frequent reference to Scripture, but the various passages are now to be subjected to the new insights and ‘wisdom’ of our scientific age.

This becomes plain from a quick perusal of the sections into which the report is divided.

The report comes divided into eleven sections (providing the “ten strands”). Of the eleven sections, five incorporate reference to the Bible and hermeneutics, indicating the committee’s intention to manufacture biblical support for its position, no matter what Scripture actually says about the homosexual lifestyle. The ‘new’ hermeneutic to which so many leaders of the CRC are committed is the key.

One section is titled “Interpretations of Biblical Passages Referring to Gender Differentiation and Same-sex [Relationships].” Another is titled “Advances in Scientific Understandings of Sex and Gender, Intersex and Transgender.” These are the advances that are to be applied to the biblical passages on the issue.

And a brief study (and reapplication) of the biblical truth and definition of marriage is offered in the section entitled “Historical, Biblical, and Theological Foundations for Marriage.”

How can the creation ordinance of marriage, which speaks of God making women for man and joining them as one flesh, be applied to a union between a male and a male?

The committee has its answer—why, this too is ‘good.’

But the section that caught our eye is the first section. It is titled: “Guidance of the Holy Spirit in the Reinterpretation of Scripture.”

This, mind you, in the context of the CRC’s present position that it based on Scripture, namely, the homosexual lifestyle is disobedience to God and His Word.

And now a committee with its classis calls for a repeal of that position in the name of the Holy Spirit, relying on His guidance.

The audacity staggers one, to say the least.

But this is what Classis GR East is prepared to do. And all in the name of Christ, love, biblical truth, and the Spirit.

It is irony, is it not, that this report with its proposal comes out of Classis GR East, the same one that insisted on deposing a certain consistory and its minister for their stand against the theory of common grace.

That classis has come a long way since 1924.

And once again its way is contrary to all truth and righteousness, sad to say.

Next article we intend to offer a brief critique of some of the arguments used to justify this anti- Christian proposal. 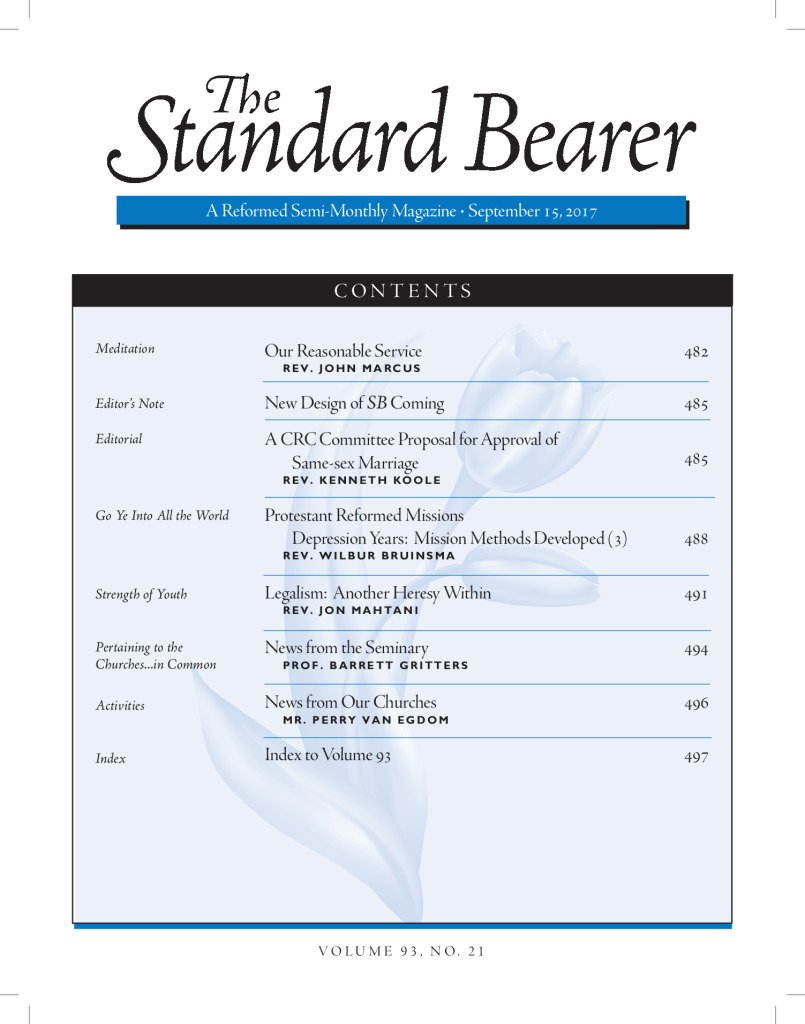