Campus Crusade for Christ claims to do work for Christ, and in proof points to the results it obtains. But the appeal is not valid, for results do not prove a doctrine, a cause or a movement. Dazzling productions with an imposing array of “stars” are not necessarily adjuncts of the truth. Moses learned this in connection with the divinely directed use of his rod. Jannes and Jambres also produced astounding results. Apparently good results may be obtained by application of the poultice or salve of a modern cult. Perfectly good results may be forthcoming from means and methods neither God nor His Word sanction (I Sam. 6; II Sam. 6). If worthy results are brought about in just such a manner, it does not follow that no criticism should be made of the means used. Yet the matter is often presented in such a way that any criticism of it would appear to be opposition against the work of the Lord. Any practice is acceptable, so long as souls are saved, is the reasoning. But the cause of God and truth do not need a boost from anything unscriptural. Nor does the church need any movement away from the old Bible, the old gospel, the old creed and the old worship. The “old paths” and “the good way” (Jer. 6:16) are the only paths and the only way for young and old.

What so plainly characterizes this movement is its pushing for “decisions” rather than the preaching of repentance. As it views the gospel, the purpose of the good news is man’s convenience, not the pressing of the claims of God. The demands of a holy God, a divine Lawgiver and an offended Judge must not be allowed to interfere with man’s chance to come to Christ. Hence the note of repentance is notably absent. At first contact with a sinner, no more is required than a slight and passing reference to danger, as in a hurried quotation of Romans 6:23. The nearest approach to repentance may be in the advice that no unconfessed sin is to be tolerated in the life, and “following I John 1:9takes care of that.” The biblical definition of sin offered is that sin is an attitude of indifference to God characterized by rebellion. This makes sin fundamentally indifference to God. To quit sin one only has to quit being indifferent. Not only faith, but confession, too, then, becomes easy. No wonder if members of some religious movements deem the preaching of repentance as a necessary element of the gospel as “not evangelical!” But a much more biblical definition of sin would be, “Sin is any lack of conformity to the law of God” (Westminster Catechism). A much more biblical proclamation of the truth of the gospel would be, not against, but according to the Epistle to the Romans, where it is emphasized that in order to live and die happily, and to have the only true comfort of belonging to the one only faithful Saviour Jesus Christ, a man must, first, know how very great his sins and miseries are. To acquire that knowledge one must get into that body of truth found in Romans I-III. Then, second, a man must know how he may be delivered from all his sins and miseries, and for that knowledge he must be instructed in the truth embraced in Romans IV-XI. Third, he must know how to express gratitude and live a life of thanksgiving to. God for such deliverance, and that knowledge is clearly outlined in Romans XII-XVI. There in that Epistle you have the fulness of the gospel of the grace of God. The truth in those opening chapters cannot, be omitted from true evangelism in the interest of preserving “a free gospel.”

There is in this ministry so much of “sudden decision” for Christ. Why? Why does “decisionism” prevail in the place of the preaching of true repentance, and the preaching of the effectual calling of God to the dead sinner from darkness and death to His marvelous light, and that when, where and as He pleases? The answer is because this whole scheme is based on free-willism. It is egocentric, and we use that word deliberately, as a favorite word in the jargon of the movement is “ego.” ‘It is the Ego which in the case of the natural man or the “carnal Christian” is found on the throne of the human heart. Here is simply a different way of referring to man’s “Free Will” viewed as “on the throne.” This is evident from Crusade books which teach that the reason people are not saved and “most Christians are not filled with the Holy Spirit is because they are unwilling to surrender their will to God.” Then follows a diagram showing Ego (Free Will, RCH) on the throne of the life. One may then come across the statement that the most important thing a person can do as a Christian is, not to glorify God, but, “to allow the Lord Jesus Christ to have control of his life.” This is not the gospel of the grace of God, but the old humanism, the old Pelagianism revived.

There is also the danger of wrongly relating faith and feeling. Through faith, not feeling, are ye saved. “The Christian life is based on faith in God’s Word, not feelings—emotions come and go.” It would be an error, admittedly, to think that without a certain emotional experience, there could be no genuine faith, or to take feeling for faith and rest upon it, rather than on the objective Word of God as the ground of faith. True, the confidence of faith comes not from feelings, but the statements of Scripture. Nevertheless, faith and feeling are not mutually exclusive. Faith is not without feeling. Faith is a form of feeling, as well as a form of understanding. True faith is a certain saving knowledge and an assured confidence. This makes faith something of not only intellectual but spiritual depth, so that it functions inwardly and outwardly not without feeling. Divorce faith and feeling, and faith becomes mere mental assent to the call of the gospel. Then it is no more saving faith, but the “faith” which the natural man can generate in his mind or produce from his will. It is said, faith in the fact of God and His Word are first of all necessary, then feelings will follow. The danger lies in taking this which has been made a “historical faith” or mere assent for believing unto salvation. .In the interest of the rule of the gospel, “by faith and not by works,” faith is made a mere ready acquiescence to “the fact of God and His Word.” This still makes faith a kind of works, since it originates, anyway, from man’s heart, being native to the natural powers of all men. When faith is thus stripped to “Only-believe” it may appear to be antithetical to everything of a “legalistic life” (Crusade jargon), whereas, in reality, it is but another form of creature-merit, and a brand of it simplified and made easier for man to perform. True and saving faith is opposed to salvation by works, but not to enlightened feelings. For “with the heart man believeth unto righteousness” and does so with the hearty “confidence (which the Holy Spirit works by the gospel in his heart) that remission of sin, everlasting righteousness and salvation are freely given by God merely of grace, only for the sake of Christ’s merits” (Heid. Catec., 21). That and nothing less is saving faith! Sudden “decision” or “easy faith” are not marks of grace; if anything, they are marks of streamlined legalism.

This is so when misguided zeal proudly opposes anything sounding like the sovereignty of God. Preach as Paul did in Romans III that man 1s totally undone without the power of God bringing him under the reign of grace, preach as he did that the work of grace is not of him that willeth, but of God who has mercy, preach as he did in Romans IX that salvation is completely in the power of God’s sovereign will, and men, though they may not bluntly deny Paul (for to depart from Paul is heresy), will advise omitting such emphasis, lest some be offended, others made careless and profane, and still others led to lethargy and discouragement. Such leaders must be deficient in Christology, for they do not preach Christ in His threefold office where especially He needs to be seen as Ring. They must also be deficient in theology, which teaches the great fundamental of the faith that God is God, and therefore sovereign not only in providence, but also in grace. This primal law of the sovereignty of God Jesus preached, not only privately before His apostles, but openly to all men from the beginning of His ministry. He knew the reaction that preaching would bring—hatred and animosity—yet he shunned not to declare all the counsel of God. He believed that “the salvation of the righteous is of the Lord” (Ps. 37) as is evident from His, “I thank Thee, Father, Lord of heaven and earth . . . even so, Father, for so it seemed good in Thy sight!” But there is that Ego, Free Will, even in the work of “‘presenting the claims of Christ,” which in the interest of gaining “decisions for Christ” finds very annoying any will above its own. The idea of trusting all to the sovereign will of God and resting the work of true conversion to the almighty power of the Spirit does not fit with the aims and endeavors of would-be autocratic man. That man thinks he can put faith in Christ without asking Him to give him the faith. He rests satisfied with a faith which is not “the operation of God,” and one which can be exerted without the grace of the Spirit. Like Samson with shaven locks assaying to go out as before, he thinks fallen man, because still commanded, can perform. Spiritually dead in trespasses and sins, man still has a natural knowledge of natural things, and a natural knowledge of God, a moral sense of good orderly deportment and a natural ability to believe with a temporal faith. But that is far from “the faith of God’s elect,” which is the gift of God. 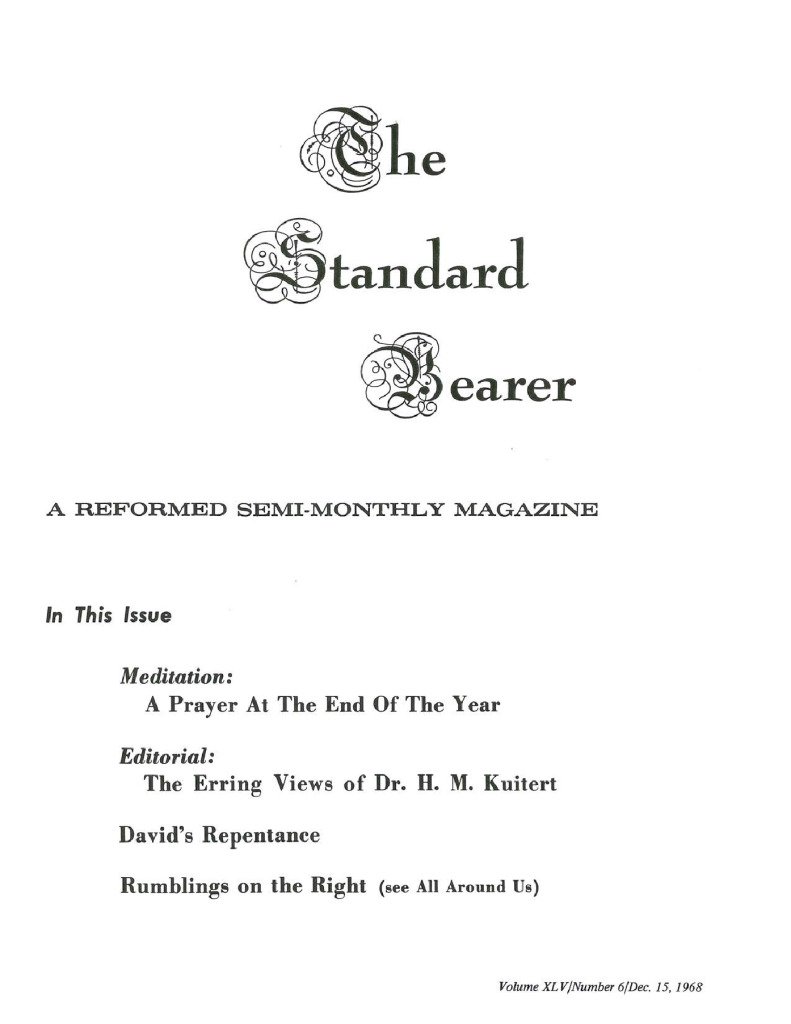