A rather recent religious movement is the Campus Crusade for Christ, International, with headquarters in San Bernardino, California. To draw a comparison, the organization is somewhat in the line of Child Evangelism, Youth for Christ or the Billy Graham Crusade. Therefore, while neither in the modernist nor the liberal side of the ecclesiastical field, its proper sphere is not within the Reformed perimeter, much less in that of Fundamentalist circles. It is a branch of Neo-evangelicalism. Its official magazine quarterly, “Collegiate Challenge,” may carry an occasional abridged article from that neo-evangelical publication,Christianity Today. The advisory board of the crusade boasts such names as Harold John Ockenga, said to be he father of neo-evangelicalism,¹ and inventor of the term itself, and Billy Graham, the neo-evangelical evangelist. Other supporting names appear, such as, Bob Pierce, Oswald J. Smith, Wilbur M. Smith, Clyde Narramore, Mark O. Hatfield and Walter H. Judd.

Advertised as “a student Christian movement designed to present the message of Jesus Christ to collegians throughout the United States and the world,” it aims “to mold the destiny of tomorrow’s world” or to “help change the world” by introducing men to Christ. “Changed lives equal a changed world.” This line of thought is especially intended to be appealing to the ecclesiastically liberal side of society which has always been more or less “post-millennial” in outlook, that is, the progress of the “gospel” will gradually permeate and conquer every area of life, until the kingdom of God becomes visibly apparent and so readied for the coming of its King. It would appear from “Crusade” literature that “the world” in general means whatever the individual connected with the movement wants it to mean, and in particular refers to the world of mankind. According to Scripture, the term “world” is rather complex, having about nine different shades of meaning, three of which appear within the compass of one verse, John 1:10. There it is said that “the world was made by Him.” But that world since the Fall has been subjected to vanity, imprisoned in the bondage of corruption, and so groans and travails in pain under the burden of that enslavement without deliverance until the Lord Jesus Christ visibly and bodily appears in our atmosphere to bring about the redemption of our bodies and the glorious liberty of the sons of God (Rom. 8:18-23). The world will not be changed for the better until He comes (II Pet. 3:10-13). It is regrettable to tears that the Billy Graham set does not see this.

The philosophy of Campus Crusade, if indeed it may be called that, lies in the emplacement of “a strong wholesome emphasis on the authority of the Scriptures, the living Christ, the importance of the church and the adventure of discipleship.” One may read all the brochures and descriptive literature of this movement in examination of that “philosophy” and find it to have no more depth than this trite, frothy “back cover” language. In connection with this “wholesome emphasis on the authority of Scripture,” one does not find any such emphasis as “that they are from God,” hence “divine Scriptures,” thus distinguished from all apocryphal books (which have neither “power”, “efficacy” nor “authority”), nor the wholesome statement that the written Word of God is the only infallible rule of faith. (Belgic Confession, II-VII). Nor is “the living Christ” or “the church” any where near defined or delineated with even an approach to the Scriptural beauty and clarity of a Guido de Bres (BC, X, XXVII-XXIX).

The strategy of this collegiate salvation army is to present “the message of Christ” (a term in preference to “the gospel” which makes the offence of the cross to cease) on campus “through team meetings and Bible studies in fraternities, sororities, dormitories and other living groups . . . through films . . . records, athletic teams, breakfasts and literature.” The results of this crusade are that “many thousands of students. . . have committed their lives to” Christ, and “hundreds of these are engaged in taking Christ to the world.” The crusade goal is “to present the message of Christ to the collegians of the world in order to bring each student to a personal knowledge of Jesus Christ and commitment to Him as Saviour and Lord.” This strategy consists of hammering away at “the Four Spiritual Laws” and “the Ten Basic Steps,” which sound like Buddhism’s “Four Noble Truths” and its “Noble Eightfold Path.” Constant reference is made to “sharing”, sharing a testimony, an experience, a verse of Scripture, etc., which sounds like Buchmanism’s (Moral Re-Armament) “sharing” ritual.² Other strange terminology of this collegian cult includes such frequent expressions as “the witnessing experience,” “testimony” (a term used over against “preachimony”), “action group, “yielded Christian,” “spiritual Christian,” “carnal Christian,” “helping to change the world,” and “man is continually trying to reach God.” New converts are taught to confess in prayer, “I have been in control of my own life.” (This in the face of Acts 17:28!) Such is a sample of the working jargon of these crusaders, who, by the way, advise their membership, “don’t use Christian jargon. Words such as ‘saved,’ ‘convicted,’ ‘converted’ and ‘sin’ do not communicate truth to the average non-Christian . . . ” Why then, under the crusade’s Law Number Two, is Romans 6:23 carried before the world, “the wages of sin is death!” Why advise, “Share the message of Christ,” only to add, “Don’t use Christian jargon!” One also comes across such a la Graham expressions as, “Man has the power of free will, the power to say ‘Yes’ or ‘No’ to God.” God then waits upon, man, the deciding factor as to whether His or the devil’s will be done. God “waits to sit upon the throne of your life, but you must invite Him in to your life. No one can be a Christian without surrender of the [RCH: would-be autonomous] will to Christ.”

This language, exotic to the older generation, to a biblical vocabulary, and probably deemed, “relevant” by the collegiate caste, is intended to convey basically two ideas, that of “conversion” (to use Christian jargon) and that of “Christian living.” Not close, however, does this come to what the Reformed know as “the true conversion of man to God and the manner thereof.” For conversion “is not to be ascribed to the proper exercise of free will . . . but it must be wholly ascribed to God who has chosen His own from eternity in Christ, so he confers on them faith and repentance, rescues them from the power of darkness, and translates them into His marvelous light; (they therefore) may glory not in themselves, but in the Lord” (Canons III, IV, 10). Conversion is experienced by the elect, because God “works in them true conversion.” This He does by causing the gospel (Christian jargon) to be preached to them, by powerfully illuminating their minds by His Holy Spirit. In fact, prior to this efficacious act of God, He regenerates by pervading the inmost recesses of the man, opening his closed and softening his hardened heart, so infusing new qualities into his will, which heretofore dead, He quickens, actuates and strengthens, so that the man then may come to Him and believe in Him (ibid., 9).

Then the movement teaches that each new convert won through personal witnessing to the truth of Christ must be brought to the possession of Christian assurance. This is done through the following rationalization process. He is asked, “Have you invited Christ into your life?” The necessity of doing this must be impressed on the seeker with some such advice as, “He will not force himself upon us; we must invite Him in to our life to be Saviour and Lord.” Then, “Were you sincere about your accepting the Lord’s invitation to you?” referring to, “Behold, I stand at the door and knock; if any man. . . open the door, I will come in . . .” So, “where is Christ right now? He said He would come into your life. Would He mislead you? Then where is He at this moment?” After the answer desired is extorted: “in my heart,” the inquisition continues, “On what authority do you know this?” The answer here fished for and hoped shall be forthcoming is, “Why, I know it because God has promised it in His Word, and I have met the conditions demanded by Him.” Then the counsellor points out to the new convert just what has happened to him since he “decided to accept Christ.” The Lord has saved him and come into his heart. He is now a child of God. At this moment he begins the great “adventure” of the Christian life. The next step is to have a word of prayer together where the convert may pray a prayer prescribed, or one of his own, thanking God for what he has done. Thanksgiving is an act of faith. Faith pleases God. It is good to do this because it is pleasing to God. Assurance may also follow from the confidence which flows from this act. This is a sample, literally, of Campus Crusade “evangelism.” In another installment, the Lord willing, it must be shown how superficial and dangerous this invitation system is. Pity the person who cannot see it is all the most sickening Arminianism from beginning to end!

All this rigmarole amounts to a kind of “Protestant” Roman Catholicism, if such a thing can be imagined! The Christian witness or counsellor becomes’ a sacerdotal functionary, a “priest” who extracts an “auricular confession” and imposes a prescribed course the subject must meekly follow to be a recipient of grace. The priest will instruct you in exactly all the ritual, custom, ceremony, penance, et cetera, that must be performed for salvation. When you have performed all that, the priest will then inform you that you (and hemust so inform you, or you cannot) now possess true grace. Here assurance is not something which comes as a free gift of grace from the Holy Spirit through the Scriptures opened to the opened heart. No, assurance is, as the literature noted above reveals, something one man gives to another. You, as a “personal worker” or Christian who “witnesses for Christ,” can “give assurance” to any convert to Christ who has met His “conditions.” This is certainly a far cry from the Christian doctrine of assurance³ as outlined in the Westminster Confession and its beautiful chapter XVIII. Even more beautiful, and more comprehensively developed, is the doctrine of assurance as set down in the Canons of Dordt, V, articles I-XV, especially articles IX-XIV, and in the immediately following Rejections of Errors, I-IX, especially articles V and VI.4 What a “crusader,” who wields but a spike of straw, finding too “heavy” that right good Westminster blade or the Jerusalem steel of Dordt! 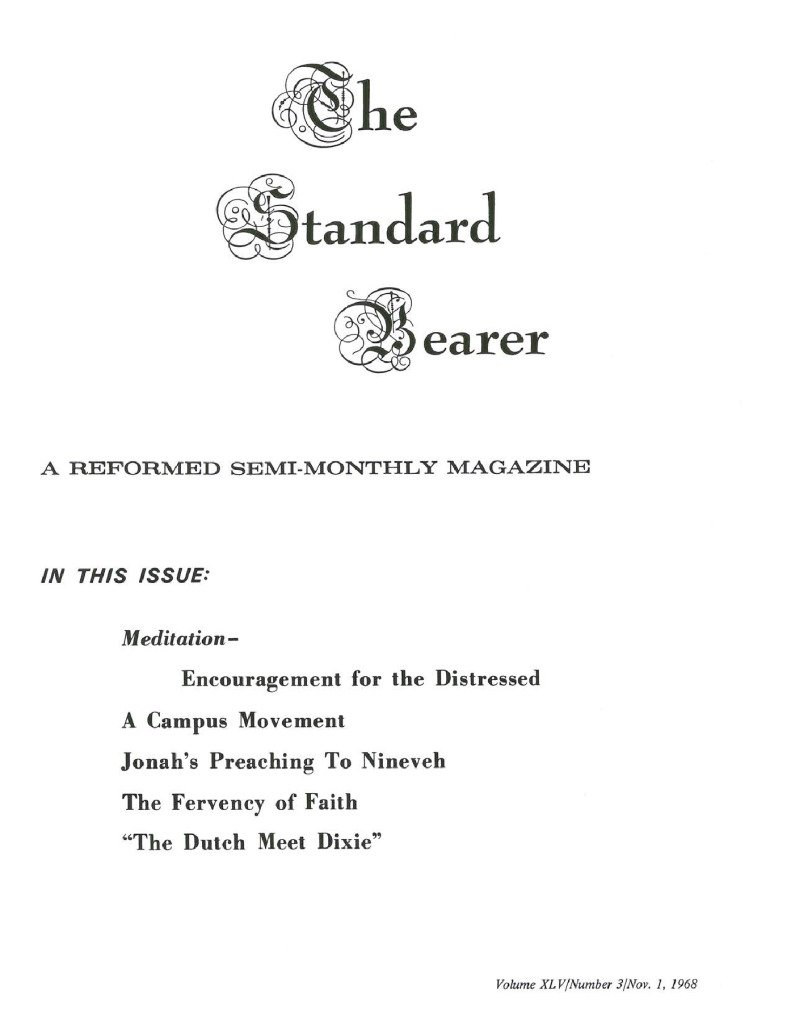