A Bit More About Marriage

A Bit More About Marriage

A short time ago I passed along the remark that I intended to write a bit more about marriage. Since that time other articles are appearing in the Standard Bearer on this same subject. I am happy about that, especially because in the meantime I have received a letter in which the remark was made that marriage is no longer understood, not by the world, nor by the church. The writer added that it is appalling how little; even married couples in the church understand of the holy bond of matrimony. So maybe even this small contribution may serve a purpose in its own way.

We speak of the marriage bond. And we speak of that bond as an exclusive union between two parties, a man and a woman. This union is so absolutely exclusive that the interference of a third party means adultery, since a third party creates unfaithfulness in the marriage bond. And this union is the most intimate covenant fellowship that is conceivable between two persons, so that as far as these persons are concerned it is all-inclusive, it involves their whole life, both in body and soul, “until death them do part.” All of which means that we can speak of marriage from a three-fold aspect: a natural bond, a legal bond, and a spiritual bond. All three of these are essential to a real, holy, happy marriage.

Let us take a look at that natural bond:

When I speak of a natural bond I do not mean what some would advocate today in defense of free love. Many like to tell you that the sexual impulse in man is as natural as hunger and thirst, and must likewise be satisfied under any and every circumstance. This gives license to young people to indulge in sexual relationships before marriage. And this gives married people the liberty to indulge in their lusts, together, but also promiscuously as the occasion offers. But this is nothing less than rank wickedness, which Scripture correctly brands with the terrible indictment of fornication and adultery.

What is true, is that God created Adam and Eve as male and female. Scripture makes a point of it that Adam was first created, and then Eve. Adam was taken from the dust of the earth, and God breathed into him the breath of life. He was the highest of all God’s earthly creatures, formed in the likeness of God as image-bearer, impressed with the image of true knowledge, righteousness and holiness. But Eve, in turn, was taken from the flesh and bone of Adam, from his rib, near his heart. She was completely human, like her husband. And yet sexually different. She was sufficiently similar, and yet sufficiently different that together they could live in paradise as man and wife in intimate fellowship with one another, and thus in intimate fellowship of love with God, as His friend servants. Adam was king of the earthly creation. But I hesitate to speak of Eve as queen, because it is more correct to say that her calling was to assist Adam as his help. In everything she did she fulfilled her duty when she devoted herself to her husband and to his calling. Together they walked through the garden to admire the wonders of God’s creation, together they walked with God in the cool of day, together they talked, and sang, and rejoiced in the high calling of earth’s king to the glory of their God.

It is still true that God brings as by His own hand to every man his wife. A young man meets a young woman, sometimes under such striking circumstances that they can plainly see the hand of God’s providence that brought them together. They grow fond of each other as they become better acquainted, so that they are drawn to each other and enjoy each other’s companionship. If that attachment is nothing but a sexual lure or attraction that can only be satisfied with constant embracing, they had better think thrice before plunging into an unhappy marriage. They must; have many likes and dislikes in common. The one must fill a definite need in the life of the other. Friendship must grow into love, not a wild, romantic “love,” but a serious, plain, down to earth, yet powerful attachment, rooted in respect and admiration. He looks forward to the day when he can claim his virgin as his very own, and she looks forward to the time when she can devote all her time and effort to serving the MAN in her life, to giving him children and to helping him train them in the fear of the Lord. In marriage they give themselves completely, soul and body, to one another, so that sexual relationships serve to express their intimate love and unity. God never intended that sexual intercourse should serve merely for carnal pleasure, not that marriage should serve merely for the lustful convenience of the parties involved. “What? know ye not that your body is the temple of the Holy Ghost, which is in you, which ye have of God, and ye are not your own? For ye are bought with a price: therefore glorify dad in your body and in your spirit, which are GOD’S” I Corinthians 6:19, 20.

But I must hasten to add that if marriage is no more than a natural bond it is still fornication.

For there is also a legal bond in marriage.

Those who advocate free love sneer at the idea that a mere “yes” before a justice of the peace, sealed by a marriage certificate, can make a marriage binding. They favor marriage on an experimental basis. Even if they go through the formalities of a legal marriage to satisfy the law, they do so with tongue in cheek, certain that this can be dissolved as soon as they weary of each other.

But we are not individuals who live our lives independent from our families or from our community. Therefore in olden times parents made the arrangements for the marriage. But today the magistrate also has something to say about our marital relationships. And that is as it should be.

The magistrate is placed in authority over us by God. God joins in marriage, not man. He makes the marriage legal through the magistrate. Therefore when a marriage is solemnized, vows are spoken before the face of God and before all those who are immediately concerned. He wants us to realize this. Any vow rashly spoken or carelessly broken brings God’s judgment upon us. That is what God tells us in the third commandment. “What God has joined together, let not man put asunder.”

Yet if marriage is nothing more than a natural, legal relationship it is still fornication.

Real marriage is in the Lord. Read Ephesians 5, and in this connection read also the valuable article of Rev. Kortering in the April 15 issue of the Standard Bearer. If you have read it, I recommend that you read it again.

The only real bond of unity that can bind heart, mind, soul and body together as “one flesh” is the bond of faith that unites us in our Lord Jesus Christ. If that is lacking, there can only be a marital gap that can never be filled. If husband and wife do not agree spiritually, they will not agree on anything else. Their lives will have to be a series of miserable compromises.

Paul speaks in II Corinthians 6:14 of being unequally yoked with an unbeliever. Imagine, he says, harnessing an ox and an ass, a clean and an unclean animal to the plow. How abominable! But how much more abominable in the sight of God is the believer who tries to fit himself (or herself) under the yoke of an unbeliever to sacrifice his faith, his convictions, yes, all that is most important to him in life, for the sake of “peace.”

Husband and wife must be able to pray together, read the Scriptures together, worship together on Sunday in the church, discuss together and work out together their problems in the fear of the Lord, in covenant communion and fellowship with God. The Lord commends His blessing there—no where else. 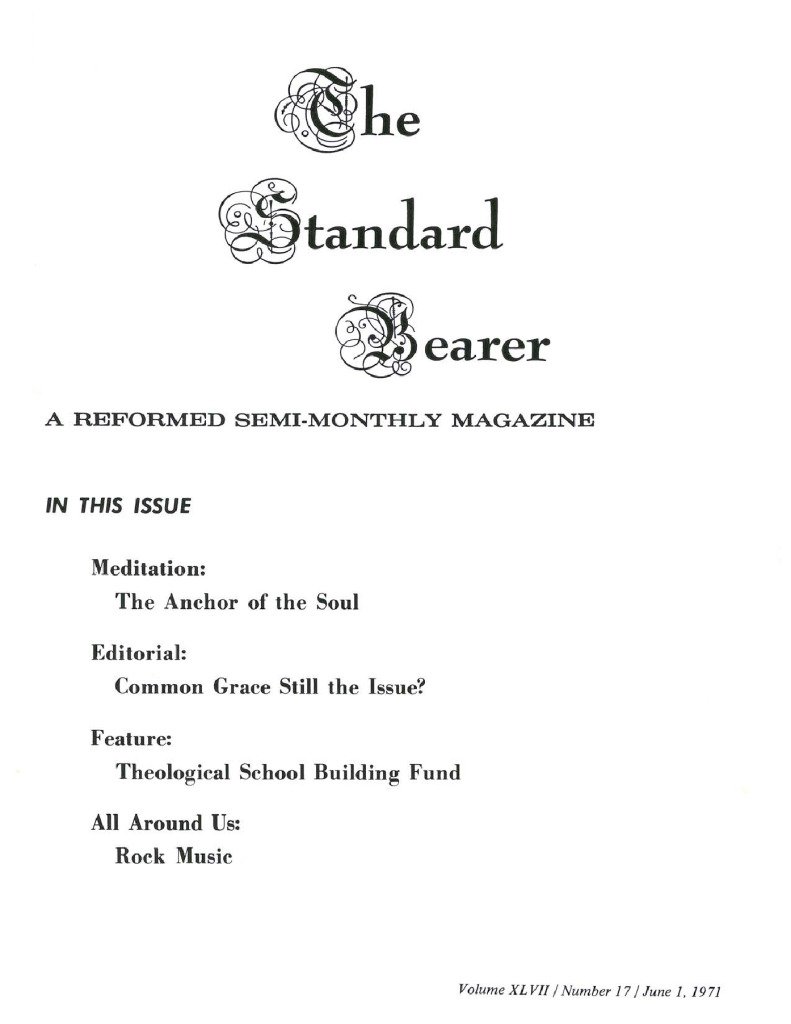