It was with great wrestlings that our Standard Bearercame into being and continued to exist by the grace and tender mercies of our God. In this wrestling, conflict and labor and trials the Lord gave His blessing. It was ever a rising in and above the conflict in faith; it was indeed luctor et emergo (I struggle and I emerge). Did not Jacob cry, “I will not let thee go, except thou bless me”? Thus it was also with our paper during these fifty years of its existence!

In the first place, the Standard Bearer began with mighty power of faith, but there were few laborers who could write. Soon even one of the pillars (?) who helped to begin our paper deserted the ranks of the writers. Then the ranks were made smaller, till, after not many years, there were two writers besides the late Reverends Wm. Verhil and Gerrit Vos. These two were the Reverends H. Hoeksema and G. M. Ophoff. The latter were busy men, who had to burn the night oil to finish their work and had to cut their sleep short. But they were in the strength of their years and were steeled to the battle.

How ever, gradually the time came when the question was raised whether there should not be more writers. Other young ministers had been trained in the seminary, and gradually were desirous, too, of aiding a bit in writing in the Standard Bearer. The matter went through a period of discussion; it was a sort of Sturm und drang. For the paper, a time of crisis. The question was raised whether the Standard Bearer had served its purpose as a free paper under the RFPA and should now become a denominational paper, a “kerkelijk blad. ” It was opined that the Standard Bearer was too much for many people to digest. There were some strong voices raised against such a suggested change; the editor-in-chief, Rev. H. Hoeksema, would go along with this change, whereas it would afford him opportunity to write in the English language (he was writing predominantly in the Holland language) concerning many subjects in a permanent form. He could then write his dogmatic studies in book form. However, that change of the Standard Bearerinto a church paper somewhat like De Wachter(Christian Reformed church paper in the Holland language) was not to be.

Instead there was the guidance of the Spirit which led in the direction of having our paper divided into definite rubrics. Rev. H. Hoeksema suggested the following rubrics: Meditation, Editorials, Doctrine, In the Churches, Biblical History, History of Dogma, Social Topics, Political Conditions, Missions, Education, Press Reviews, Question Box, Book Review. Truly, an impressive array of subjects. These would, of course, not all appear in each issue; but these would be interchanged in the various issues. There was one condition upon which Rev. Hoeksema would favor and would cooperate with such a rubrication of the Standard Bearer. He writes in italics as follows: ” . . . that each and every editor or co-worker would be held absolutely responsible, during the time that he was appointed for a certain rubric, to fill his space with material concerning the subject assigned to him, and no one else, not even the editor-in-chief, may fill that space.” The truth of the matter was that those who had to write not infrequently let the editor down in the past, and then he would, with Rev. Ophoff, need to write some more in haste to meet the copy deadlines with the printer, and the printer’s devil!

It was then suggested that it would facilitate matters if all the co-laborers were put “under law.” It would be somewhat the law of the school-master in the Seminary once more. It would be like assigning term papers. Each would be assigned certain subjects. This would in effect be a kind of systematizing of the work, although it was short of rubricating the paper. In the September 1, 1942 issue, on pp. 468-469, we have such a schedule for the year 1942-1943. Undersigned also was given certain subjects on which to write. He well remembers that at that time he was taking a few courses at Central College, Pella, Iowa, while he was minister in the church there. He was greatly interested in the philosophical presuppositions of common grace and related subjects, and took courses there in philosophy which had not been offered in our Seminary when he attended. The editor-in-chief assigned him and also others such subjects as: The Shaking of All Things, Rationalism and Christian Logic, Dewey and Christian Education, Election and Foreordination, The Concept Person in Scripture, The Value of Apologetics, The Dangers of Early Adolescence, Barth’s Conception of Predestination, etc. This array of subjects was perhaps indicative of a need of some basic study and research on the part of the young men in the ministry.

Evidently this assigning of subjects was not to the taste of the associate editors. The pages of the Standard Bearer indicate that some three years later, 1945, under an article “Cleanings From Twenty Years,” a speech delivered by one of the ministers then with us, the matter of rubrics, was brought up once more; and the list which we enumerated above from the pen of Rev. H. Hoeksema was again submitted for consideration.

It was at this point that a new and different schedule for the Standard Bearer was printed by “H-H.” It was indeed, lector et emergo! Finally, the rubrication of the paper emerged in definite rubrics which were to be written by men to whom these were assigned for one year. Thus the writers became definite co-editors and had a voice in the annual meetings of the editorial staff. It was in the year 1945, in the October 1 issue, that the first contribution appeared in the rubric From Holy Writ, from the hand of Rev. H. Veldman on Matthew 7:13-14. After a few issues the undersigned started writing on Ephesians 1. Incidentally, undersigned has written in the rubric From Holy Writ continuously ever since that time, being exclusively responsible for it, with the exception of the year 1948-49 when he was ill. It was the Rev. C. Hanko who then wrote in this department on such subjects as: Mouth of the Lord, The Hand of the Lord, Beholding God’s Face, The Hope of the Covenant Mother in the Old Dispensation, The Multiformity of the Church, The Offices in the Church. I must not omit that Prof. R. Decker has also recently given me a much needed lift when he wrote in this department on the Epistle of James.

When I read this rubric, From Holy Writ, as it has appeared now for some twenty-eight years it reads like a chronicle of my life. It was the good pleasure of the Lord that my life should be so very much taken up also in our paper, be it then in a limited and more or less subordinate role. No one is more conscious of the shortcomings and weaknesses of my writings than I am. Yet, I read these articles once more, and I see that, although here and there they react to the controversies which shook the foundations of our churches, they are in the main an attempt to give serious and basic exegesis of many passages of Scripture in popular language, although one not-too-kind critic once castigated me for having written in five different languages in one article. Happily, that was the exception.

Also in these articles in the rubric From Holy Writ it was often Luctor Et Emergo! Many of these essays were written while I was traveling as home missionary. Of the twenty-eight years that From Holy Writ appears, some thirteen years the articles were written in many parts of the United States, in motels, hotels, private homes. The latest were written from the Island of Jamaica. Many times copy was sent in with the feeling of the imperfection of the copy as to form and content.

It is a rather happy and blessed experience to have one’s youthful colleagues in the ministry come and tell you and write you of the blessing and help they received from some of my strugglings to put on paper the meaning and sense of the Holy Spirit. It indicates that the Lord was willing to use the efforts of From Holy Writ in the service of His ministry in the church. For this the writer is deeply and humbly grateful.

From Holy Writ has covered many chapters of the Bible and even some complete Bible books. To mention just a few, which my perusal of past volumes of the Standard Bearer reminded me of, I will call attention to the following: Gog and Magog (Ezekiel 38,39), the Book of Malachi, sections of I Corinthians, the First Epistle to Timothy. Hebrews hopefully will be finished; studies in I and II Peter, and studies on Paul’s great addresses in the Book of Acts, and many other Scripture passages.

It is now some forty-six years ago that I entered the seminary of our churches. Without the Standard Bearer the life of me and our churches would not have had their healthy existence under God. Without my own small contribution to From Holy Writ, my life would have lost much of the actual Luctor Et Emergo. It has been my privilege, together with my colleagues of many years, to have labored in this kingdom work.

From Holy Writ has devoutly and seriously always attempted to write accurately according to the sense of the Scriptures. This column has never knowingly tried to foist its opinion on the Scriptures, but has always allowed the Scriptures to speak. And so we commit the many pages over many months and years into the hand of the Lord. Ever the rule has been “Scripture interprets Scripture.” May this rubric continue to hew the line of proper exegesis in these days when the so-called “new hermeneutics” is more and more taught in the schools of the entire world.

God keep our Standard Bearer, and our editors to write along pure paths, adding nothing to nor detracting anything from the Book of Prophecy, the revealed counsel of God. May the Standard Bearerkeep the banner aloft till Jesus comes. Amen! Even should our heads be gory with the blood of the righteous, may we stand! Struggling against all the hosts of hell, may we emerge in the final victory, according to God’s sure and faithful promise. 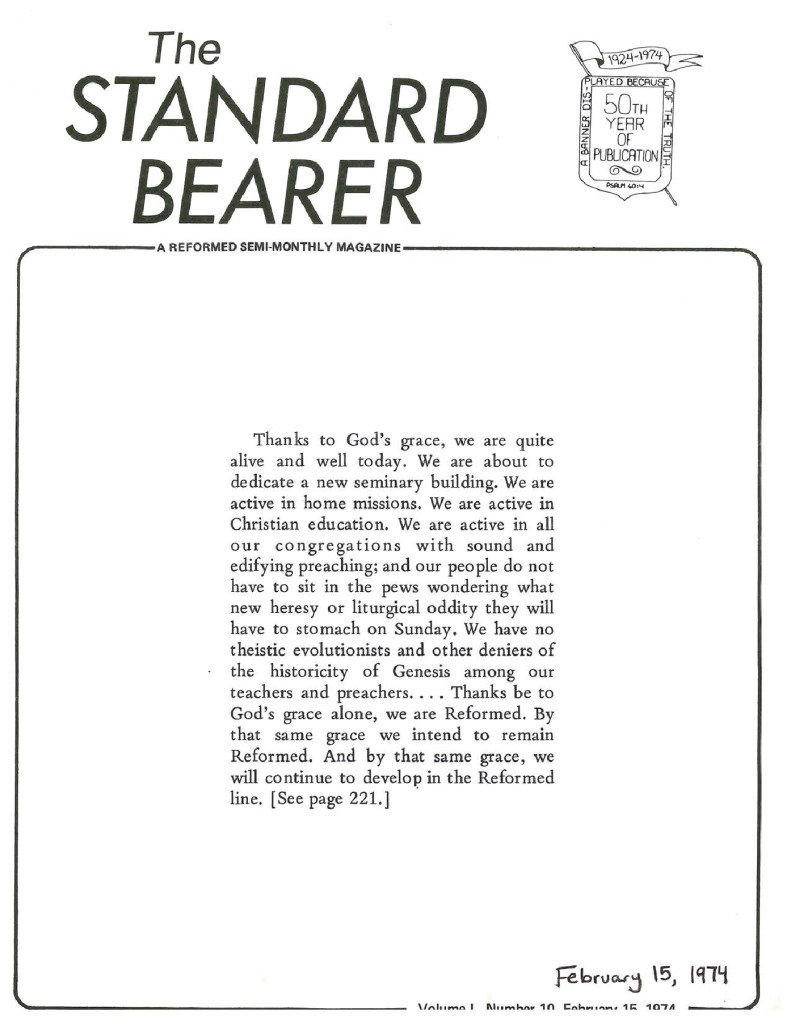