1. What Does “Brotherhood” Mean? 2. As to the Birth of the Church. 3. The Unbreakable Scripture.

What Does “Brotherhood” Mean?

Such was the title of a brief editorial appearing in the Church Herald, a Christian weekly serving the Reformed Church in America, in the issue of February 20, 1953.

“God is indeed spoken of as the Father of the race, because He created man in His own image. The Bible tells us, however, that man fell from his high estate, lost the moral qualities of the image of God, is no longer the child of God but rather in rebellion against Him, and therefore under His condemnation. We are ‘by nature the children of wrath, even as the rest’. Jesus told the wicked Jews who persisted in their opposition to Him, ‘Ye are of your father, the devil, and the lusts of your father it is your will to do.’

“If is time for evangelical Christians to speak out for Jesus Christ, and to insist that ‘a brotherhood that leaves Him out is no brotherhood at all.’ We can become children of God, and thus brothers one to another through Christ, and through Him alone. The Bible knows no other family relationship than this family of redemption founded on Jesus Christ. ‘As many as received him, to them gave he the right to become children of God, even to them that believe on his name; who were born, not of blood, nor of the will of the flesh, nor of the will of man, but of God.’ The only brotherhood the Bible knows of is the bro­therhood of believers in Christ, based on His atoning death at Calvary, and the new birth through the power of the Holy Spirit. He who will not have Christ for his Savior cannot have God for his Father, the Bible says. It is time that Christians speak out against fuzzy thinking which takes Christian concepts and makes them meaningless.”

We believe the editor is to be complimented for the courage he displayed in this “protest”, mostly because it is well-known that many of those who sub­scribe to his paper will agree with the principles expressed by the National Conference of Christians and Jews, and who heartily support the idea of “Brother­hood Week” as sponsored by this organization. Many of his readers whom we know are addicted to this “fuzzy thinking which takes Christian concepts and makes them meaningless.” So that many, no doubt, members in his denomination, both clergy and lay­men, will be not a little irked by this editorial. In the light of this, we take our hat off to the editor who at least attempts to direct his readers in the right direction.

This does not mean, however, that no questions remain after reading this editorial. I am wondering whether the editor should not be criticized for writing in a “fuzzy” manner about some of these “Christian concepts” he writes about. For example, what does he mean when he writes: “The Bible tells us, however, that man fell from his high estate, LOST THE MORAL QUALITIES OF THE IMAGE OF GOD, etc.”? (I underscore—M.S.) Does he mean that man lost the image of God entirely? or, does man retain remnants of this image? Again, to whom does he refer when he speaks of “evangelical Christians”? And again, What is really the editor’s conception of true ‘brotherhood”? Is it one in which the basis harks back to the eternal counsel of God and His sovereign election of His people in Christ, which is realized through the redemptive work of Christ and the application of it through the Holy Spirit? Or does the editor mean to teach that our actual sonship, though merited on the basis of Christ’s atoning work and accomplished through the new birth, is neverthe­less contingent upon our reception of Christ and the Holy Spirit? The tenor of the editorial seems to in­dicate the latter, and with this we seriously disagree.

As To The Birth Of The Church

In the Presbyterian Guardian of January 15, 1953, page 14, 15, the Rev. J. Marcellus Kik continues an article begun in a previous issue on the question: Should the Church Train Her Ministry? Because we did not have this previous issue in our possession we do not wish to pass judgment on the main issue in­volved.

We simply call attention to a remark the Rev. Kik makes in column one of the article above referred to. The remark appears in the following paragraph:

“But may not and cannot the Church take over the teaching of the original languages so that minis­ters can rightly divide the Word and distribute it to others? John taught the Church several Hebrew expressions. AT THE BIRTH OF THE CHURCH the Holy Spirit enabled the disciples to speak with other tongues so that the listeners exclaimed: ‘Behold, are not all these which speak Galileans? and how hear we every man in our own tongue, wherein we were born?’ Since the Holy Spirit AT THE BIRTH OF THE CHURCH taught the disciples foreign languages to declare the wonderful works of God, may not the Church teach the languages of the Bible so that her ministry may correctly interpret and declare the written Word?” (I underscore the large type—M.S.)

The Rev. Mr. Kik it appears is addicted to the view of the Premillenialist and Baptist who maintain that the Church of Christ was born on the day of Pentecost.

To us who have been trained to see that the Church of Christ is one in both the Old and New Dispensations, the phrase “as to the birth of the Church” appears a bit heretical. We believe the saints of the Old Testament were as much as we members of the Church, which is Christ’s body, and therefore the Church could not have had her birth at Pentecost but as our Heidelberg Catechism expresses it in Question 54 “The Son of God from the beginning to the end of the world, gathers, defends and preserves to himself by his Spirit and Word, out of the whole human race, a Church chosen to everlasting life, agreeing in true faith, etc.”

“And the Scripture cannot be broken”, John 10:35b. That is the text which the Rev. J.G. Vos took for the basis of an article he wrote in the Blue Banner Faith and Life magazine, Vol. 8, No. 1, of which he is the editor. The title of his article is the same as that we placed at the head of this section of our department.

The Rev. Vos develops this subject from various points of view, under five subtitles, one of which is: The Scripture Cannot be Broken by Careless Neglect of Its Message. My remarks have to do especially with this part of his article which reads as follows:

“Today the attitude of most people toward the Bible is not an attitude of downright opposition, but of careless neglect. A few scientists and critics are opposing the Bible actively, while millions of ordinary folks are living out their lives without paying any attention to the Bible at all.

“This easy indifference is all around us. People do not read the Bible; they have only the vaguest ideas as to what is in it. It may be that they have a Bible in their homes, but they neither read it nor pay any attention to its teachings. It is related that a party of American tourists m Egypt were shown by an Egyptian guide the spot where the bones of the seven lean cows of Genesis 41:19-21 were buried! The tourists were duly impressed, none of them realizing that these seven cows existed only in a dream of Pharaoh. Such Ignorance of the contents of the Bible is nothing unusual today. Even among church mem­bers ignorance of the simple historical contents of the Bible is abysmal. Many a church member cannot tell whether David lived before or after John the Baptist. Many a church member cannot find a particular book of the Bible without consulting the table of contents or index. As for the teachings of the Bible, people’s ignorance is even more abysmal.” So far the quote.

Much of what the editor says I believe our own people can take to heart. It happens sometimes, whether we preach in our own Church or elsewhere, that when we announce to the Congregation the place of our Scripture lesson and pause for a moment or two to give our people time to locate the place where we will read, that we hear people still paging when we are nearly finished with the passage. We have even actually seen some of our people look in the index to find exactly where the particular book of Scripture is to be found of which we desire to read a portion. This is pathetic, indeed! These same people often can describe the contents of a silly novel, and relate in detail an article they read in the Reader’s Digest, but when it comes to Scripture they appear to know nothing. What a pity!

These are the same people who are never present in the society meetings where the Word of God is discussed and studied. They are the same people who tire quickly of healthy controversy, and are so easily irked with faithful preachers whose desire it is to have their people well informed with the Word of God to combat the current errors in doctrine that seek to creep into the Church. May God give us more who will zealously search the Scriptures! 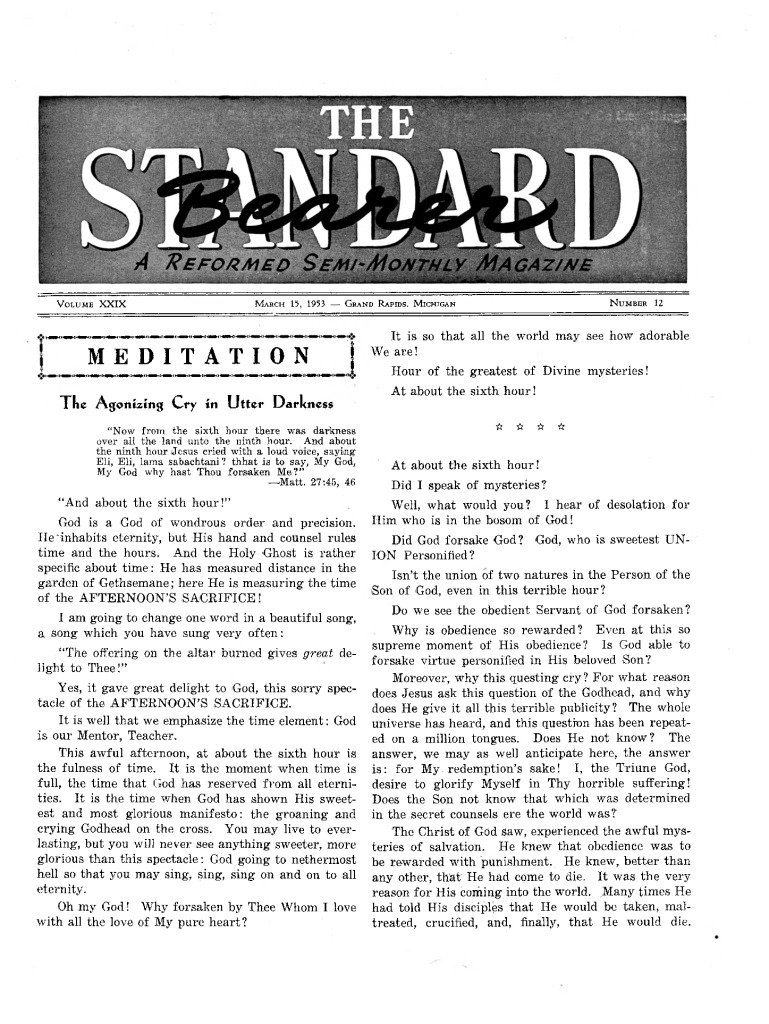