1. The Standard Bearer and Our Future 2. Daane’s Distortion of Reformed Truth

1. The Standard Bearer and Our Future 2. Daane’s Distortion of Reformed Truth

The Standard Bearer and Our Future

The question now is: how is The Standard Bearerrelated to the history we have just related and, especially, to our deposition from office in the Christian Reformed Church? And what significance does it have in respect to the future of our churches?

Some of us will, probably, still remember The Witness, a paper which was first published after the synod of 1920, at the time of Janssen controversy. The purpose of this publication was chiefly to, combat and expose the fallacy of the instruction of Dr. Janssen, not merely in a negative way buts also in the way of positive development of the truth. We felt, at the time, that there was no room for this in The Banner or De Wachter, and because Dr. Janssen had been justified by the synod of 1920, and because, after that synod of 1920, new light had been shed on the instruction of Dr. Janssen by the student notes, it was considered advisable to organize a special publication. This, then, was The Witness. To the staff of this publication belonged; among others, the professors Berkhof and Volbeda, and also the Rev. H. Danhof and myself were members.

After Dr. Janssen had been deposed in 1922 there was little practical reason anymore for opposing his teaching and for continuing the publication of The Witness. However it was continued for some time. However, since the Janssen men in the Christian Reformed Church had determined to get the Rev. H. Danhof and undersigned out of the church on the basis of our denial of “common grace,” they. i.e. the two ministers just mentioned, decided to inform the staff ofThe Witness that they intended to write on the question of “common grace” and to expose the fallacy of that theory in our publication. The rest of the staff, however, refused to let us write on the question, partly because they were afraid to stir up another controversy and disturb the peace of the church, partly, too, because they themselves believed in common grace. We then informed them that we resigned as members of the staff of The Witness and would write no more for it. The final result was the publication of our Standard Bearer.

It was first published in Oct. 1924, the year, therefore, that the “Three points” were adopted. Its immediate purpose was to expose the fallacy of the “Three Points” and to develop positively the Reformed truth of the sovereign grace of God with respect to election and reprobation. You must remember that our paper was first published when we were still in the Christian Reformed Church. We were not deposed from office till Jan. 1925. The staff of The Standard Bearerconsisted of the Revs. H. Danhof; G.M. Ophoff, Mr. G. VanBeek and myself. It was published, as we know, by the Reformed Free Publishing Association. The publishing of our paper in which we, from the beginning, exposed the fallacy of the decisions of the synod of the Christian Reformed Church and the “Three Points,” was, no doubt, one of the immediate causes of our deposition as ministers in the Christian Reformed Church.

Now the question is, as was announced in the subject on which I was asked to speak tonight: what does The Standard Bearer have to do with the future of our Protestant Reformed Churches? On the very face of it we would say that the two are intimately related. The future of our churches stands closely connected the continuance and well-being of our publication. We understand, of course, that The Standard Bearer is by no means the only factor that must be taken into account when we consider the well-being of our churches in the future. When we speak of the future of our churches we do not mean the mere existence of our churches as such regardless of their maintenance of the truth. On the contrary, we refer to the definite, continued existence of our churches as maintaining the Protestant Reformed truth. Shall we keep the faith and continue to confess it in all its purity in the midst of the churches and in the midst of the world? This is the question with which we are concerned: And this depends, of course, chiefly on the grace of our God Who only can make us faithful unto the end. But, in that grace of God, it also depends on many God-given means and factors even besides The Standard Bearer. Chief of these is always the pure and full preaching of the Word. Our ministers must be diligent and faithful in the searching of the Scriptures and in the proclamation of the truth as expressed in the Protestant Reformed faith. They must do this from the pulpit as well as in the catechism classes. Moreover, closely connected with this stands the instruction that is offered in our theological school where men are instructed and trained for the ministry of the Word of God. We must emphasize, as much as possible, the richness and purity of the Protestant Reformed truth over the radio. We must have our own schools and Protestant Reformed teachers as much as possible. We should teach the truth as we believe it in our Sunday schools and discuss it in our societies. All these means and others must be taken into account when we speak of our future, i.e. of the future of the Protestant Reformed Churches.

But also The Standard Bearer must be taken into account in considering our future. It will be and serve as a guide to ministers and laity together. This, we may say, is the purpose which our publication has served in the past. And I am also confident that from the volumes of The Standard Bearer that have been published thus far and which many of us still possess, both ministers and laity may and do still gain important information and instruction in the Word of God. Thus it may also be in the future. I say: it may be thus. If, however it is to stand in the service of this important purpose, it stands to reason that it must remain faithful to the cause for which the Reformed Free Publishing Association was originally organized and our magazine was first published. That cause is the maintenance as well the development of the Protestant Reformed truth which we hold dear and the rejecting and combating of all heresies that are in conflict with the truth. If The Standard Bearer, thus remains faithful it will, no doubt, continue to be an important factor in the preservation and development of our churches in the future.

I must still discuss our future, in the light of the promises of God.

But about this in our next issue, the Lord willing.

Daane, in his article in The Reformed Journal, so utterly distorts the truth of Reformed theology that the question arises in my mind whether he ever understood its teaching or even whether he ever read many works on the subject. Fact is that he never substantiates his utterly false contentions and misrepresentations by literal quotations from Reformed authors. This, of course, he could not do. I challenge him to attempt it. All he does, in his article, is to present his own philosophy. He is an able writer as far as style and language is concerned, but the contents of his article I consider very unscholarly.

To prove my contentions let me quote, first of all, the following paragraph from his article:

“At this point in the process of theological reflection a transformation so subtle took place that it frequently escaped notice. Election and reprobation having been equated as equally definitive of divine sovereignty, election suffered distortion by being equated with reprobation. God’s sovereignty was no longer expressed in terms of gracious election toe salvation, but in terms of the sovereignty of reprobation which came to be regarded as the definitive key to the understanding of God’s sovereignty. In actual fact, sovereignty defined in terms of the sovereignty of reprobation became the central doctrine. This may be illustrated by a reference to Christ. Sovereignty was not defined in terms of the Lordship of Christ, which looms so large in the New Testament teaching, and which is there described as God’s triumph over sin and death and hell through the events of the cross and the resurrection, nor in terms of the Christ who will return at history’s end to execute judgment, as Paul says, ‘according to my gospel.’ Rather, the Lordship of Christ was, within Reformed theology proper, defined, when it was considered at all, within the limits of the simple fact Christ, as the agent through whom God executed his sovereignty of election and, reprobation, saved some and not ethers.”

It is almost inconceivable that the above paragraph could have been written by one who poses as a Reformed theologian. There is, I make bold to say, not a word of truth in it.

Nor is there any proof of Daane’s contentions either from Scripture and the Reformed Confessions or from Reformed theologians.

I have a sneaking suspicion that Daane, in the above paragraph, refers to me as he frequently does in the rest of the article. That is, he refers to me, not in my real self, nor in regard to my views as expressed in any of my writings and several publications, but from the viewpoint of his own philosophy and imagination. It is easy to prove that he is altogether mistaken if, at least, it is true that he also refers to me. For proof I will offer just one quotation. It is found in Vol. V of The Triple Knowledge, p. 39:

“There is only one answer to this question: not the original creation and. human race are first in God’s counsel, not these are the end He has in view; but the Church and all the glorified creation in Christ. The Church is not an afterthought of God, it is not the product of repair work: it is God’s original design. He purposed to glorify Himself by realizing His everlasting covenant of friendship in Christ Jesus His son, and, through Christ, in the millions upon millions of elect that constitute His body, and in whom the glory of God in Christ must shine forth in the highest possible degree. That is the end. And all the rest, creation and the fall, reprobation and all the powers of darkness, and all the history of the world, are, in the decree of God; but means unto the realization of that end.”

I hardly suppose that Daane will agree with this.

Nor do I care whether he agrees or disagrees. All I wish to emphasize is that this quotation out of one of my works gives the lie to the entire paragraph of Daane which I quoted above.

I certainly do not put reprobation on a par with election, but place it in a subordinate position and that, too, for a definite purpose, the purpose of the redemption and glorification of all things.

Here I must stop for the time being. 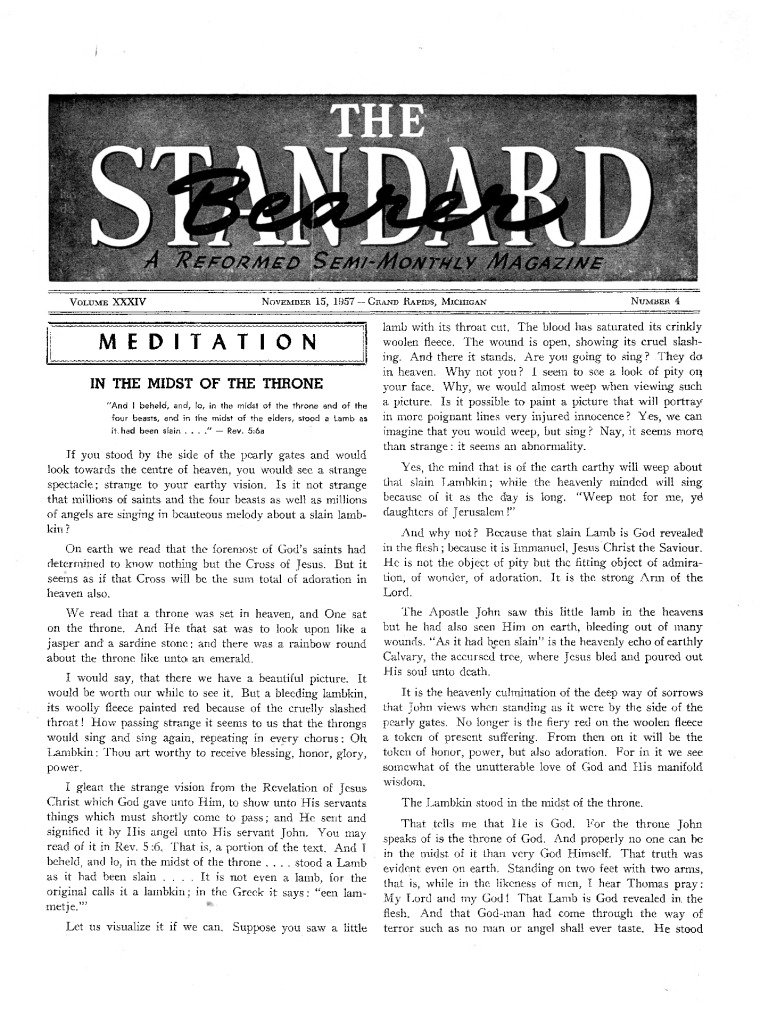