I reside in Ireland. Therefore, it is natural that I should report on the recent “Marriage Equality Referendum” here. On May 22, 2015, Ireland became the first nation in the world to redefine (defile, profane) marriage by a popular vote in a referendum. Every other nation, including the USA (on which I will not comment), gave “marriage” rights to homosexuals and lesbians either by a majority vote of the legislature or by judicial fiat. In Ireland, the citizens chose to redefine (defile, profane) marriage in their own Constitution. Let that sink in— Ireland’s people chose to do this!

They chose to do this after a campaign of misinformation, propaganda, empty promises and intimidation, but they chose it, and God will hold the nation accountable for it.

Every home in Ireland was sent a copy of an “Independent Guide” from the Irish Referendum Commission. I quote from that document: “The Irish Constitution says, ‘The State…guarantees to protect the Family…. The State pledges itself to guard with special care the institution of marriage on which the Family is founded, and to protect it against attack…’” Then, the same document opines, “The Constitution does not define marriage…. The courts have decided that marriage is between a man and a woman….” Historical revisionism at its worst! Does anyone really believe that the framers of the Irish Constitution (1937) did not know what “marriage” was when they wrote the Constitution? How can the state pledge itself to “guard” and “protect” marriage, if the state does not know what marriage is?

Now the state, following the will of the people (or, perhaps, the people, following the propaganda of the state) believe they know what marriage is—the new wording of Article 41 of the Irish Constitution is “Marriage may be contracted in accordance with law by two persons without distinction as to their sex.” Opponents of the change argued passionately that this will affect other rights as well—since Article 41 is entitled “The Family,” any change to marriage affects the family itself and has all kinds of implications for the rights of children, adoption rights, surrogacy rights, and more.

First, the youth vote was extremely high—give the young people, who are usually apathetic when it comes to voting, a cause to believe in and they will vote in huge numbers. Many even returned from overseas just to vote in this “historic” referendum.

Second, the “Yes” campaign was galvanised and organised. It had the support of all the major political parties, many of the official arms of the state, the trade unions, and influential celebrities. It also had the support of foreign money, especially from American LGBT groups.

Third, the “No” campaign was small, badly organised and routinely vilified by all and sundry. There were reports of “No” posters being torn down and vandalised, for example. In the University of Limerick (UL) a debate was organised between the “Yes” and “No” side, so that both sides could be heard on campus. The Students’ Union of UL held an emergency meeting to boycott the debate—they did not want the “No” side to have a hearing at all. I attended the debate. The “No” speaker, Senator Rónán Mullen, was excellent, but the reaction to the debate and Q&A session afterwards revealed that many Irish young people respond to emotion, not logical argumentation. “Young men likewise exhort to be sober minded” (Tit. 2:6) is certainly lost on them. Do our Christian young men show sobriety of thinking so that they are different from the world?

Fourth, the message coming loud and clear from the media was “If you vote ‘No,’ you are a bigoted, hateful, discriminating homophobe.” Therefore, the shallow argument, “We want our gay friends to be happy” resonated with the Irish voter. After all, who wants people to be unhappy?

Fifth, so secularised are even the religious Irish that I dare say few, if any, would know that marriage is a picture of the relationship between Christ and His church; therefore, religious and moral arguments are lost on them. That is why the “No” side’s arguments were almost exclusively that a child needs a father and a mother and that homosexuality cannot provide that. The argument is true—and it, like the “Yes” side’s arguments, appeal to emotion—but marriage is fundamentally more than that, just as it is also more than two people (why stop at two?) loving one another. Marriage is a sacred, lifelong, one flesh union between a man and a women because it reflects a greater, spiritual relationship—a relationship that God has defined (Ezek. 16:8; Matt. 19:4-6; Eph. 5:32). But the average Irish citizen—even the average Irish churchgoer—does not know that.

Sixth, and finally, the Roman Catholic church, once the moral voice of the nation, once feared by the masses, has lost her moral authority—and rightly so. Her scandalous history of sexual abuse of children by the clergy with the egregious cover-ups has made her irrelevant. Who will listen to celibate men who failed to protect children? What do they know about love and marriage?

The next step is to draw up legislation to reflect the “will of the people.” We have been assured that freedom of religion will not be affected, and that churches will not be forced to participate in same-sex unions—the change is only to civil marriage. In much of Europe, a couple are married by the state, followed by a solemnization ceremony in the church. But we were also told in 2010, when homosexuals and lesbians demanded “civil partnerships,” that they would not seek “gay marriage.” That was a lie. Time will tell how long it will take before the “marriage equality” advocates will be pushing for ecclesiastical recognition and approval.

Having succeeded in changing Article 41 on the family with regard to the (legal) definition of marriage, Irish secularists have their eyes on a new target—the Eighth Amendment, which, in the Irish Constitution reads, “The State acknowledges the right to life of the unborn and, with due regard to the equal right to life of the mother, guarantees in its laws to respect, and, as far as practicable, by its laws to defend and vindicate that right.” Such a wording, adopted by referendum in 1983, which gives equal right to life to the unborn, is, as far as I am aware, unique in national constitutions, and would give Planned Parenthood apoplexy!

Irish women desiring abortions travel to England/ Wales, where abortion is available for any cause up to 24 weeks. How iniquitous of the UN and Amnesty to suggest that women have the “human right” to murder their own children, while ignoring the very real human right of the children, which right (for now) is protected under the Irish Constitution!

The UN and Amnesty, with their pro-death allies, will have a fierce, uphill battle, however. Ireland has a very vocal pro-life movement. It will be much, much harder to convince the Irish people that women should be permitted to murder the unborn. However, given the rapidly liberalizing trends in Irish society, we certainly cannot rule out the possibility of more concessions to the “pro death” cause.

Readers of this rubric will recall the case last year, reported in the September 1, 2014 (vol. 90, p. 467) edition of the SB, of a preacher in Northern Ireland having a brush with the law over his islamophobic sermon—a sermon in which he strongly criticized Islam.

Pastor James McConnell of the Whitewell Metropolitan Tabernacle preached on Sunday, May 18, 2014, that “Islam is heathen. Islam is satanic. Islam is a doctrine spawned in hell.” At the time, McConnell was interviewed by the police, but charges were not filed. Victory for free speech? Not so fast!

Following an official complaint by Dr. Raied Al-Wazzan of the Belfast Islamic Centre, who will be the chief witness for the prosecution, McConnell has indeed been charged under the 2003 Communications Act with “sending, or causing to be sent, by means of a public electronic communications network, a message or other matter that was grossly offensive.” Dr. Al-Wazzan found McConnell’s sermon “grossly offensive.” Therefore, McConnell will stand trial. If found guilty, McConnell faces up to six months in prison.

At the time, I expressed concerns about McConnell’s sermon. However, I stand behind his freedom of speech. If “grossly offensive” (whatever that means) speech is not protected, what is the point of freedom of speech?

Moreover, in a strange twist, Dr. Al-Wazzan is the same man who infamously remarked about ISIS, “Since the Islamic State took over, it [Mosul in Iraq] has become the most peaceful city in the world…. Yes, there are other things going wrong there…they are murdering people, I agree, but you can go from east to west of the city without fear.”1 Dr. Al-Wazzan later apologized for his remarks, but I am sure the Christians of Mosul—if there are any left—would not agree that they can walk across the city without fear. But, never fear, because if men like Dr. Al-Wazzan and his liberal sympathizers get their way, the streets will be safe from those dangerous evangelical septuagenarian preachers, and we will have to be much more careful about what we broadcast on the Internet!

Many Christians are on Facebook, and it is very easy to share news. But is what you are sharing really news, or is it misleading or even misinformation? That is Ed Stetzer’s warning in Christianity Today with his article, “An Embarrassing Week for Christians Sharing Fake News.”2

“It is YOUR job—yes YOURS—to check the facts. Yes, these websites should do that as well, but most are more concerned with gaining your page view than growing your credibility.”

And if you have been duped into sharing misinformation, Stetzer’s advice is clear: “Post a retraction.” “It’s not that hard,” he assures us. “It will sting a little bit because you’ll have to admit you were wrong, but it’s good for you. I promise.”

And what did I do when I read Stetzer’s article? I posted it on Facebook, of course!

A good reminder for us all—reread LD 43 of the Heidelberg Catechism. 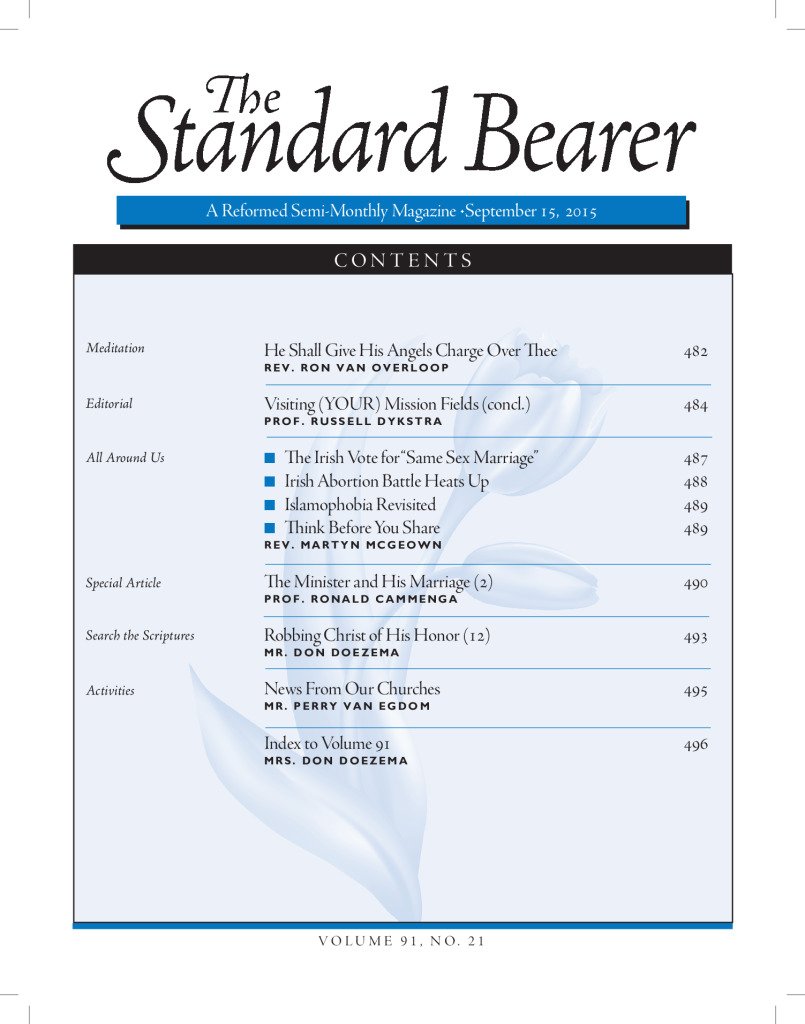