One of the events occurring in the world “all around us” is mission work. When looking for items to address for this rubric, I usually consult magazines such as Time, Christianity Today, and several others. I often focus on the big stories reported in the news, both in the churches and in society. The events reported there are certainly important as signs of the times. But the most important event occurring “all around us” today often goes unnoticed, certainly by the reporters of the world. It is the preaching of the gospel of the kingdom in all the world for a witness to all nations (Matt. 24:14).

This past January I had the privilege of visiting our Protestant Reformed mission field in the Philippines. My wife accompanied me for the first week of the trip. We witnessed firsthand what it means in practice to go into all the world and teach all nations (Matt. 28:19). I also had the privilege of participating in the work through preaching and teaching. I can report, as a writer for this rubric who has seen it for himself, that there is a tremendous amount of work going on in the Philippines and a remarkable opportunity for us to preach the gospel there as the Protestant Reformed Churches in America. In fact, over the course of our journey, it became exceedingly clear to me from the plenteousness of the harvest there that the Lord is beckoning us to seek a second missionary, and perhaps more besides.

Some self-styled missionaries in the Philippines do not see the importance of teaching and preaching. They see the widespread, systemic poverty (which we also saw), and consider it a higher priority to alleviate the economic woes of the poor in the Philippines than to instruct them in the truth of God’s Word. They claim that most Filipinos are already Christians. Most are Roman Catholics. Others are Mormons, or members of the Iglesia Ni Cristo, or Seventh-Day Adventists, or various other sects. You see? They are Christians! They don’t need doctrine. We need to focus rather on social work and financial aid.

But this way of thinking is mistaken. To be sure, we have the calling to do good to all men, especially those of the household of faith, as we have opportunity (Gal. 6:10); and we must do that. But we must also maintain that our primary calling as the church is to teach all nations the truth of the gospel of Christ. Those who are members of the above-mentioned groups, which includes the vast majority of Filipinos, we dare not assume to be Christians. That is not to say there are no true Christians in these groups. But we dare not assume that they are Christians when they are members of cults and false churches. Thus, they need the preaching and teaching of sound doctrine. As the PRCA, therefore, we have something to bring, something to say, and God is calling us to bring it and say it. God is opening doors for us in the Philippines. God has given us a rich heritage as the PRCA, a treasury of the truths of the gospel, a good knowledge of the biblical and Reformed faith, and an experience of those truths as believers with our seed in the covenant of grace. We members of the PRCA and our children have received and continue to receive from the pulpit the truth that saves us and glorifies our God. God calls us to make known that truth to others near and far who do not have it as we do: “…shew forth his salvation from day to day. Declare his glory among the heathen, his wonders among all people” (Ps. 96:2-3). “…Among whom ye shine as lights in the world; holding forth the word of life” (Phil. 2:15-16).

This is being done by our faithful missionary, Rev. Daniel Kleyn, with the help of his wife Sharon, in the Philippines. It is being done by faithful Filipino pastors too, such as Rev. Vernon Ibe, Rev. John Flores, and Rev. Leovino Trinidad. It is being done on the island of Luzon, in the area known as Metro Manila, the huge and dense home of some 22 million people; on Negros, another island of the Philippine archipelago, in Bacolod City and Sipalay; also to many other contacts throughout the Philippines. Like most of you who read the Standard Bearer, saints in the Philippines too are hearing sermons on the Heidelberg Catechism, receiving lessons in the Essentials of Reformed Doctrine, reading the Standard Bearer, and devouring the books published by the RFPA. Many pastors throughout the Philippines are eager to grow in their knowledge of the Reformed faith and life and to practice biblical church government. Let us continue to remember this work, give freely to it, and pray earnestly for the cause of PRC missions.

After 13 years of rancor over conflicting views on homosexuality, the archbishops of the Anglican Communion have voted to impose sanctions for three years on the Episcopal Church, the American branch of the Communion, for its decision last summer to allow clergy to perform same-sex marriages, church officials said Thursday.1

Some conservative archbishops thought it did not go far enough; that a call to repentance should have been issued to those provinces in the Episcopal Church that have allowed same-sex marriage. Others thought the Episcopal Church should be entirely cut off from the Anglican Communion. Interestingly, many if not most of these conservative bishops who oppose same-sex marriage do not reside in the Western world but in Africa. In a statement, the Anglican archbishops said, “Recent developments in the Episcopal Church with respect to a change in their canon on marriage represent a fundamental departure from the faith and teaching held by the majority of our provinces on the doctrine of marriage….” Traditional Anglican doctrine, continued the statement, “upholds marriage as between a man and a woman in faithful, lifelong union.”3 But some in the Episcopalian Church shot back. For example,

The Rev. Susan Russell, a senior associate rector at All Saints Church in Pasadena, CA, was among the Episcopalians who said sanctions would not change their position: “As a lifelong Episcopalian and a married lesbian priest, I think it’s not only an acceptable cost, it’s a badge of honor in some ways.”4

The days are evil. Are we encouraged that the Anglican Church is disciplining the Episcopal Church? It is certainly a positive note. But with the Anglican conservatives we would agree that it does not go far enough. Where is the call to repentance? Where is the admonition to renounce the false doctrine of same-sex marriage?! It strikes me that not the European Anglicans, but the African ones, are the conservatives in that denomination. The Western world is everywhere given over to the devilish idea of tolerance in all things. The churches of Europe and America, where Christianity spread and flourished throughout so many past centuries, have largely apostatized. Only a few glimmerings of light, like this bit of news, can still be seen here and there. And even then, the glimmerings come primarily from churchmen in Africa, rather than those in England or America.

Let us all beware of deceivers, for we in the PRCA can fall too. May the Lord preserve us in the face of the winds of lawlessness that blow steadily. May He strengthen us to maintain the third mark of the true church, “If church discipline is exercised in punishing of sin” (Belgic Confession, Art. 29). May He also preserve our sister churches throughout the world and give us the courage to keep each other accountable to teach and practice the truth of the Word of God.

Worldwide Persecution of Christians up from Last Year

2015 surpassed 2014 as the worst year of persecution in modern times for Christians, according to the World Watch List put out by Open Doors.

More than 7,000 Christians were killed for their faith last year, up drastically from 4,344 in 2014 and 2,123 in 2013. Those numbers don’t include North Korea or parts of Iraq and Syria, where accurate numbers are hard to obtain, Open Doors said. All three of those countries are among the WWL’s top five persecutors.5

For those who became martyrs for Christ last year, there was a crown of life when they opened their eyes in heaven. For us believers who learn of the increase of persecution, there is not fear, but a steady peace of mind rooted in the knowledge that these things must come to pass; there is a watchful readiness to join the sufferers, if the Lord wills; and above all, there is a hopeful looking up in the knowledge that Christ will soon appear on the clouds with power and great glory, to grant heavenly rewards for us who “fill up that which is behind of the afflictions of Christ” (Col. 1:24). 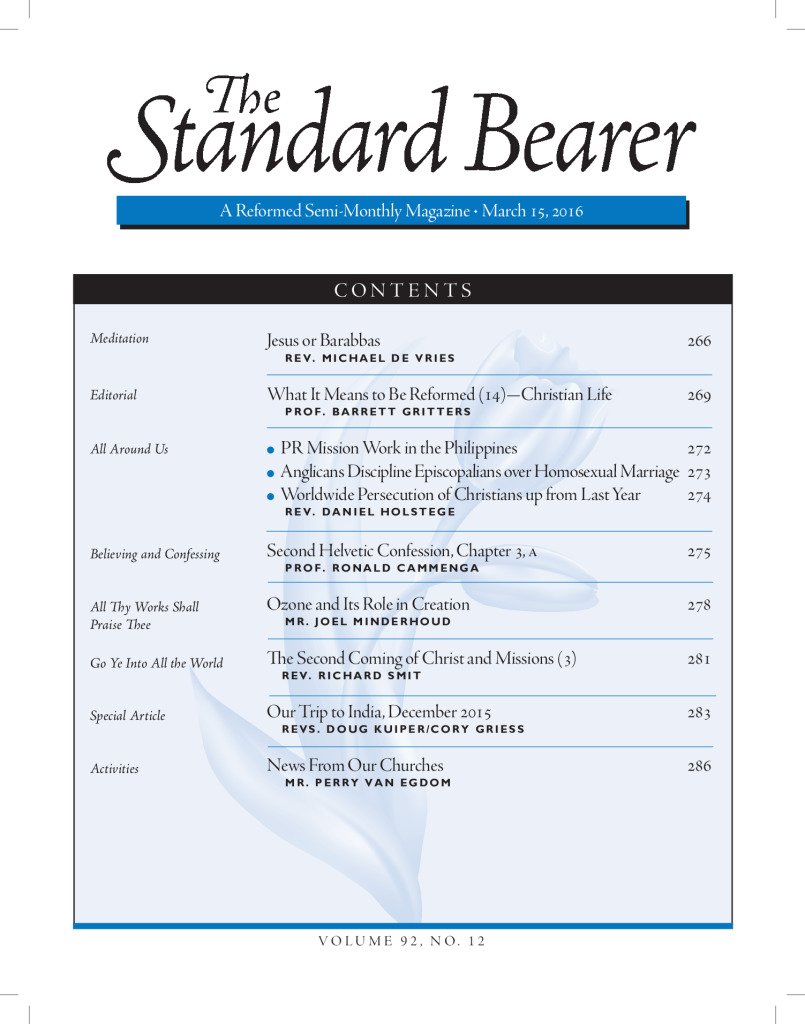