1. Playing God with Human DNA. 2. Disney’s Beauty and the Beast.

1. Playing God with Human DNA. 2. Disney’s Beauty and the Beast.

Within the last few years, significant advances have been made in the ability to edit the genes of human sperm, eggs, and early-stage embryos in petri dishes. Earlier this year, a report came out from within the United States recommending the use of the advances being made. For the New York Times, Amy Harmon writes the following:

What is so significant about this kind of gene-editing is the fact that the changes made to the DNA are changes that will be passed down to future generations. As a report from the Wall Street Journal makes clear,

Gene editing offers the possibility of treating many diseases, and there are already trials or advanced research under way to use the techniques to try to cure individuals with HIV, sickle cell anemia and cancer. But adjustments made to the human germ line—eggs, sperm and embryos—don’t just change the health of a single person; they can be passed on to any future offspring.2

What is the motivation behind so-called “germ-line engineering”? The New York Times article explains:

The advisory group endorsed only alternations designed to prevent babies from acquiring genes known to cause “serious diseases and disability,” and only when there is no “reasonable alternative.”… So-called germ line engineering might allow people to have biological children without fear that they have passed on the genes for diseases like Huntington’s, Tay-Sachs and beta thalassemia, and without discarding embryos carrying the disease-causing mutations, as is often done now.3

Not only could cancer-causing genes and disease-causing genes be taken out of the DNA, but such gene-editing could also make people struggling with infertility able to have biological children.

What is involved in germ-line engineering? “The advent of a powerful gene-editing tool called Crispr-Cas9 allows researchers to snip, insert and delete genetic material with increasing precision.”4 However, “While Crispr is generally precise, it can have ‘off-target’ effects, cutting DNA at places where it is not meant to.”5 Using tools like Crispr to snip, insert, and delete genetic material in sperms, eggs, and embryos is already taking place in other countries, such as Sweden and China.6

From the scientific community itself there are many concerns raised about this type of practice:

This type of human gene editing has long been seen as an ethical minefield. Researchers fear that the techniques used to prevent genetic diseases might also be used to enhance intelligence, for example, or to create people physically suited to particular tasks, like serving as soldiers.7

In an article from World on a related issue, we find the following comment: “‘We are accelerating down a slippery slope now when we are going to manufacture children in the laboratory to specific genetic characteristics,’ said David Prentice, a bioethicist and the vice president and research director at the Charlotte Lozier Institute.”8

The ethics behind such experimentation are obviously to be condemned. The fact is, many human beings (embryos) are killed in the process of doing all these things. We simply may not treat the creation and destruction of human life as a kind of science experiment. But other questions come to my mind: what if there are children born with dangerous, unintended results? Will they and all their offspring have to be exterminated so as to preserve the DNA of the human race?

Furthermore, to say that this kind of experimentation is leading down a slippery slope is legitimate. After all, World reports that on the issue of euthanasia, a Canadian study is already mentioning the cost benefits associated with killing off those who are a burden to society:

Canada legalized euthanasia in June 2016, declaring assisted suicide a humane way to end the suffering of already dying patients. Opponents warned it wouldn’t be a far jump from legalizing euthanasia to manipulating patients into believing they have an obligation to die and stop draining medical system resources. Eight months later, researchers at the University of Calgary have released a study extolling assisted suicide’s cost benefits: “If Canadians adopt medical assistance in dying in a manner and extent similar to those of the Netherlands and Belgium, we can expect a reduction in healthcare spending in the range of tens of millions of dollars per year.” The authors of the study denied any suggestion cost should factor into end-of-life decisions, despite the obvious connection.9

As scientists and nations attempt to discuss such significant ethical issues that have such far-reaching consequences, it is disturbing to consider that their standard for morality is simply the consensus of the majority. Truly, there is no fear of God before their eyes. No matter what my DNA may look like, this is what I know by faith: “…I am fearfully and wonderfully made: marvelous are thy works; and that my soul knoweth right well” (Ps. 139:14b).

Disney’s Beauty and the Beast

Disney is coming out with a live-action version of Beauty and the Beast, which means that the story of Beauty and the Beast will be played by real human characters. But as the movie gets redone, Disney will use the opportunity once again to push its liberal agenda on those who watch it. In the new version of the movie, Gaston’s sidekick, LeFou, has a side plot in which he wrestles with his sexuality. In an interview with Attitude Magazine, director Bill Condon stated the following:

LeFou is somebody who on one day wants to be Gaston and on another day wants to kiss Gaston…. He’s confused about what he wants. It’s somebody who’s just realizing that he has these feelings. And Josh [the actor playing LeFou] makes something really subtle and delicious out of it. And that’s what has its payoff at the end, which I don’t want to give away. But it is a nice, exclusively gay moment in a Disney movie.10

The editor of Attitude Magazine expressed his thoughts as follows:

It may have been a long time coming but this is a watershed moment for Disney…. By representing same-sex attraction in this short but explicitly gay scene, the studio is sending out a message that this is normal and natural—and this is a message that will be heard in every country of the world, even countries where it’s still socially unacceptable or even illegal to be gay…. It’s only a first step towards creating a cinematic world that reflects the one in which many of us are now proud to live. But it’s a step in the right direction and I applaud Disney for being brave enough to make it—and in doing so hopefully helping to change attitudes and bring about real social progress.11

As Denny Burk, professor of Biblical studies at Boyce College, comments, “This news is not surprising for anyone familiar with Disney’s pro-gay stance in its corporate practices. Increasingly, these themes have been detected in the content of its films.”12

How should Christians respond to something like this? I share a few points that Nancy Leigh DeMoss makes concerning entertainment in her book Lies Women Believe: And the Truth That Sets Them Free:

We entertain ourselves with reading material, movies, TV programs, and music that reflect worldly philosophies and legitimize profanity, immodesty, and immoral behavior, never stopping to contemplate that in so doing…

8 Julie Borg, “First baby girl born with three parents,” World, January 26, 2017, https://world.wng.org/2017/01/first_baby_girl_born_with_three_parents. This article speaks of a baby girl that was born with DNA from three parents—two women and one man. 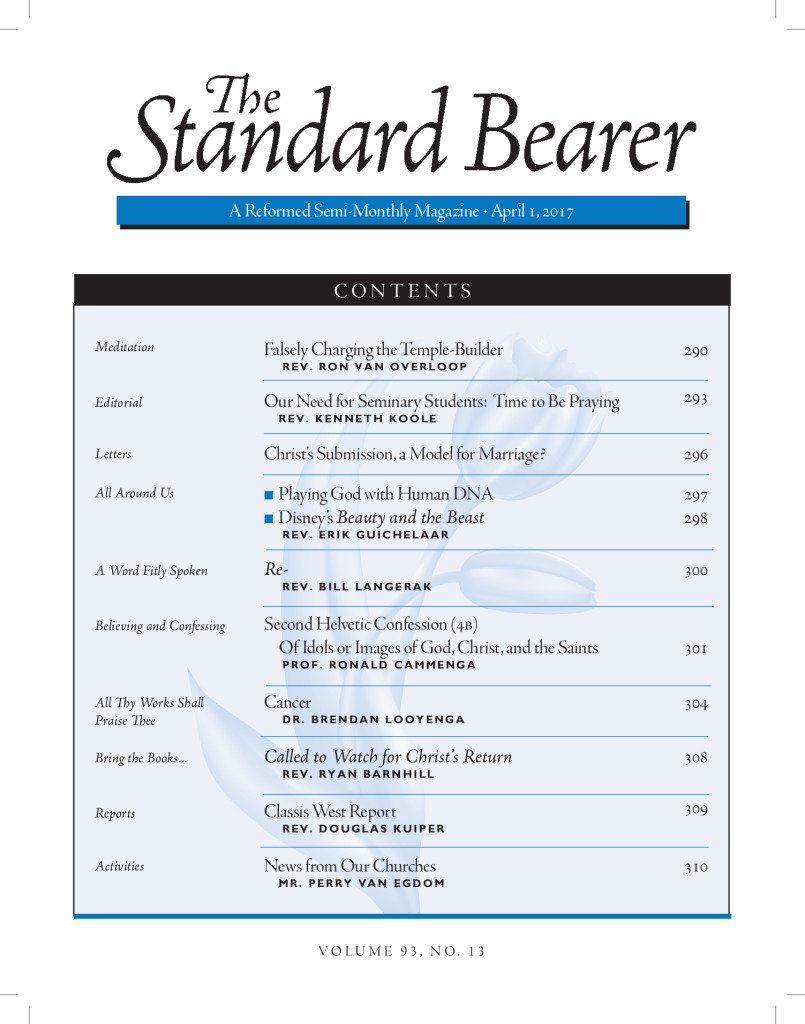