Rev. DeVries is pastor of the Protestant Reformed Chruch in Wingham, Ontario, Canada.

Morgentaler Named to Order of Canada

Such was the headline in the Waterloo Region Record, on July 2, 2008. Exactly three years ago I reported that notorious Canadian abortion activist and law-breaker Henry Morgentaler had received on honorary doctorate of laws degree from the University of Western Ontario. That pales in comparison to the award he is now to receive. The “Order of Canada” is the country’s highest civilian honor to recognize a lifetime of achievement and dedication to community. Terry Pedwell reports in the above-mentioned article:

The naming of abortion-rights activist Dr. Henry Morgentaler to the Order of Canada is being met with both applause and outrage. The Harper government was quick to distance itself from the decision.

Morgentaler, best known for taking the issue of abortion rights all the way to the Supreme Court of Canada, is among 75 people who will receive the prestigious national honor . . . .

. . . Morgentaler was instrumental in having the high court strike down Criminal Code restrictions on abortion on Jan. 28, 1988, making Canada the only western democracy with no criminal sanctions of any kind against abortion. He is to be named at a later date as a member of the Order of Canada for both his health care and humanitarian work, said a statement posted on the governor general’s website yesterday.

“For his commitment to increased health care options for women, his determined efforts to influence Canadian public policy and his leadership in humanist and civil liberties organizations,” the statement reads.

Author and feminist Judy Rebick said “it’s about time” Morgentaler was recognized for his work.

“Certainly most women believe this is a huge victory, and he put his liberty and his life on the line to win it, and I think that should be recognized,” she said. “The abortion debate is over in this country, the pro-choice side won, and Dr. Morgentaler was a big part of that victory.”

But opponents of abortion say the Order of Canada is meant to unify Canadians, not divide them. “We think the Order of Canada should focus on things that unite us, positive values,” said Joanne McGarry, executive director of the Catholic Civil Rights League. “I think it should go to people who all Canadians can look up to and admire and whose undertakings are inspiring for us.”

McGarry added that honoring Morgentaler implicitly endorses abortion, and many Canadians will be offended by the decision . . . .

That many Canadians will be offended by this decision is truly an understatement. Giving Henry Morgentaler the Order of Canada is the equivalent of presenting Jack Kervorkian, “Dr. Death,” with the Congressional Medal of Honor in the United States. In the 1970s Morgentaler was charged with committing illegal abortions in Montreal. In 1974 he was sent to prison for ten months. His case ultimately made it to the Supreme Court of Canada, resulting in Canada’s extremely liberal abortion laws. Morgentaler held an unprecedented press conference to praise himself as an Order of Canada recipient. He said, “The work I’ve done over the years and the sacrifices and sentences of imprisonment I have suffered, I think that finally now the government has recognized my contribution to Canadian women and I am very proud of it.”

Jim Hughes, national president of Campaign Life Coalition, asserts that while the advisory council of the Order of Canada no doubt sought to provide an official seal of approval on the cause Morgentaler espoused, it ended up setting off a storm of controversy and re-igniting the pro-life movement.

Jim Hughes said, “It is dreadful that this honor should even be considered for a man whose only claim to fame is that he is a professional killer of defenseless babies in their mothers’ wombs.”

At least eight Order of Canada recipients—or their families or inheritors of their legacies—have returned their awards to protest the governor-general giving abortionist Henry Morgentaler Canada’s highest civilian honor. New names have been suggested for this award. It has been suggested that it be called the “Disorder of Canada.” The one I prefer was provided by Garnet A. Parr of Duncan, British Columbia: “It is now better named the ‘Odour’ of Canada.”

STOP THE PRESSES—As I finish this article, it has just been reported that Henry Morgentaler, along with a few other honorees, received his Order of Canada on October 10, 2008 at a small ceremony in Quebec City, within the walled Citadel. This ceremony received little advance publicity (one day) undoubtedly to prevent a large-scale protest at the scene. How shameful it is when a nation goes beyond tolerating the shedding of innocent blood to actually celebrating it. “The wicked walk on every side, when the vilest men are exalted” (Ps. 12:8).

We seem to be living in an age of apology—not apology for a wrong recently committed, but for a perceived wrong or injustice that may go back many, many, perhaps hundreds, of years. Apparently it is the politically correct thing to do, both for governments and churches. For example, there have been apologies for slavery, and apologies for attempting to integrate the native population into society. Certainly there may be apologies, confessions of sin, going back many years, that are not only proper but necessary. But some of these “apologies” are not only unnecessary, but utterly absurd. One such alleged apology deemed necessary was reported in the Waterloo Region Recordon September 16, 2008 by Jill Lawless, under the headline: “Anglicans owe Darwin apology, reverend says”:

It seems the Church of England owes Charles Darwin an apology.

At least that’s the opinion of Rev. Malcolm Brown, head of the church’s public affairs department.

In a statement yesterday, Brown faulted the church for initially misunderstanding Darwin’s theory of evolution.

He says that initial failing has caused some people to continue to misunderstand Darwin to this day.

Brown issued his statement on an Anglican website launched to mark Darwin’s bicentenary and the 150th anniversary of the seminal work On the Origin of Species, both of which fall next year.

The Church of England said Brown’s statement reflects its position on Darwin but does not constitute an official apology.

Brown says the Church of England should say it is sorry for misunderstanding him and, “by getting our first reaction wrong, encouraging others to misunderstand (Darwin) still.”

The church’s stance sets it apart from fundamentalist Christians, who believe evolutionary theory is incompatible with the biblical story of the Earth’s creation.

“Why bother?” the scientist’s great-great-grandson Andrew Darwin was quoted as saying by the Daily Mail. “When an apology is made after 200 years, it’s not so much to right a wrong, but to make the person or organization making the apology feel better.”

Darwin was born into the Church of England, educated at a church boarding school and trained to become an Anglican priest.

However, his theory that species evolve over generations through a process of natural selection brought him into conflict with the church. Religious leaders of the time were largely hostile to Darwin’s ideas and argued against them at public debates.

At an Oxford University debate in 1860, the bishop of Oxford, Samuel Wilberforce, famously asked scientist Thomas Huxley whether it was through his grandfather or his grandmother that he claimed to be descended from a monkey.

Brown said that from a modern perspective, it was hard to avoid the thought that the reaction against Darwin was based on what would now be called the “yuck factor” (an emotional, not an intellectual response) “when he proposed a lineage from apes to humans.”

Brown called for a “rapprochement” between Christianity and Darwinism . . . .

Sad to say, “rapprochement” (a renewal of cordial relations) between Christianity and Darwinism has already taken place to a considerable extent, for many years, even within many Reformed and Presbyterian churches. Many seminary professors, Christian college instructors, and Christian school teachers have long abandoned the clear teaching of Scripture regarding creation. Increasingly these “scholars” have sought to harmonize Scripture with evolutionary processes.

Especially over the last half century, one theory after another has been introduced and gained popularity. The so-called “period theory,” the gap theory, the mythical theory, the allegorical theory, the poetical theory, the saga theory, and other variations that explain Genesis 1 as a doxology or as a teaching model have all been put forth. In recent years it is the so-called “framework hypothesis” that seems to have become the popular and influential view. All these views have one thing in common: they deny the literal meaning of the creation record in Scripture. And whether it is always deliberate or not, they are an attack upon the Word of God and the very foundations of the Christian faith!

What happens to the truth of the perspicuity, the clarity of Scripture, when you adopt a theory such as the Framework Hypothesis? It’s gone! But Scripture is not addressed only to theologians and scholars. All God’s people, also our children, are given the Spirit and are able to understand the Scriptures. If the events recorded in the first chapters of Genesis never really happened, Christianity is just another mythical religion. There is no room here for compromises or accommodations with Darwinism. For, ultimately, the spirit that would rob God of His glory in creating will also seek to rob God of His glory in redeeming!

Our young children have no trouble understanding the biblical truth of creation. In Lesson 1 in the book Old Testament Bible Stories for Beginners, our children between the ages of 5 and 8 are asked the questions: “What does the first verse of the Bible teach us?” Answer: “In the beginning God created the heaven and the earth.” “In how many days did God create all things?” Answer: “God created all things in six days.” And this one: “How do we know about this creation?” Answer: “God tells us about it in His Word, the Bible.” The children understand and readily embrace this clear, simple teaching of God’s Word!

May God grant us that child-like faith! That is what it comes down to: “Through faith we understand that the worlds were framed by the word of God, so that things which are seen were not made of things which do appear” (Heb. 11:3). Then there will be no apologies made to Charles Darwin. And to those who do, we say: “Shame, shame!” 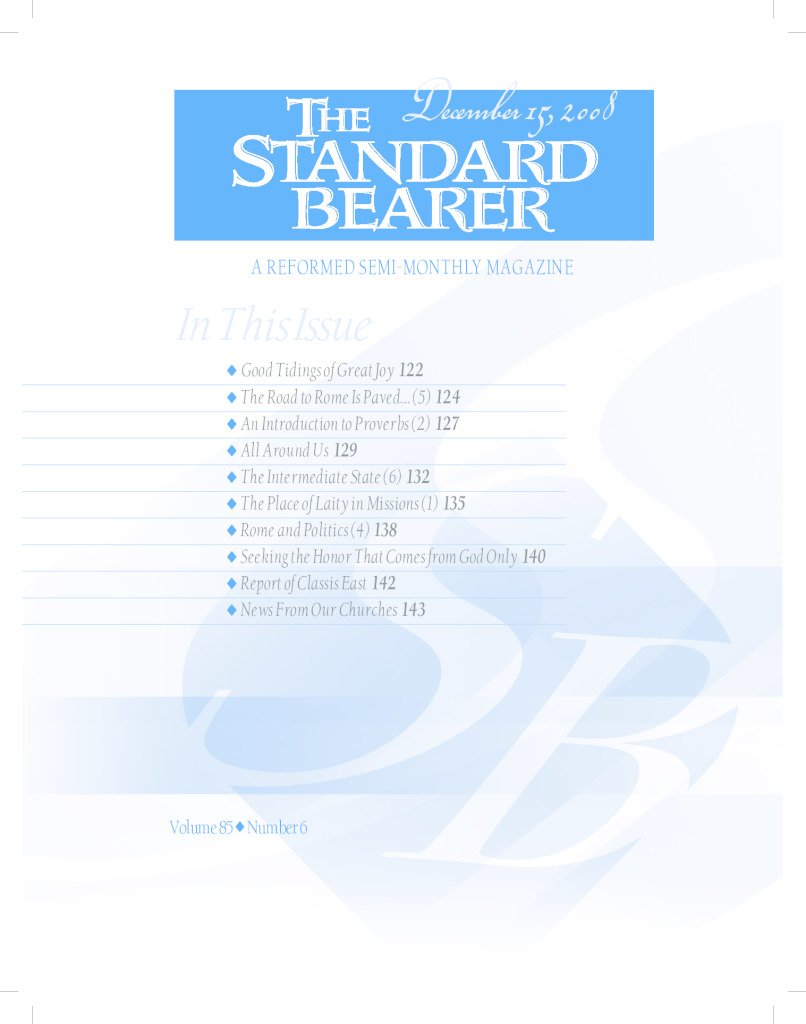