1. Miracle Mania 2. The Feminine Face of the CRC Synod

1. Miracle Mania 2. The Feminine Face of the CRC Synod

Rev. DeVries is pastor of the Protestant Reformed Church in Wingham, Ontario, Canada.

Perhaps no movement made more of an impact on the church world in the twentieth century than Pentecostalism. The early years of the twenty-first century have seen no diminishing of Pentecostalism’s influence.

A current “revival” in Lakeland, Florida is taking the world by storm, at least as far as media coverage is concerned. It is creating considerable controversy, even among Pentecostals. Rusty Leonard and Warren Cole Smith report in World, June 28/July 5, 2008 in an article entitled, “Same Old Scam?”:

Canadian Todd Bentley doesn’t look much like a minister. The 32-year-old has body piercings and tattoos on his arms and neck, and he often dresses in black.

But a minister of the gospel he is, or claims to be—and those claims have become the real story of a series of meetings Bentley is holding in Lakeland, Fla.

Bentley’s British Columbia-based Fresh Fire Ministries arrived in Lakeland on April 2 for five days of revival meetings at a local church. These services would be broadcast on God TV, a satellite network with a worldwide viewership.

The services were different in another way, Bentley claims: God showed up in a powerful way. A New York public relations firm was quickly hired to send out press releases claiming “documented healings,” and God TV relentlessly plugged its broadcasts of the services.

The services, now held in a huge air-conditioned tent, have gone on for months now, and as many as 10,000 people a night are coming. Bentley claims hundreds of people have been healed of everything from deafness to infertility—though he did admit that in the latter case we wouldn’t know for sure until the women actually got pregnant. As for the other cases, WORLD made repeated requests for documentation of healings, but claims of “privacy issues” were the only response.

A visit to one of Bentley’s services suggests that he is learning how to turn the big crowds into big money. ATM machines have been set up, providing attendees with ready cash for the offering plate and book purchases. The offering is now a significant part of the service, taking as long as 30 minutes. Bentley has not released financial information, saying he is “too busy keeping up with what God is doing” to pull the information together . . . .

This tent revival is getting so much attention because of “extravagant claims that it is the most contagious, transferable, and tangible anointing in history. There are astounding reports of angelic visitations, prophecies, visions, conversions, miraculous healings and even raisings from the dead.” So writes James Beverley in Faith Today (July/August, 2008). Bentley claims numerous encounters with angels. He talks about being caught up in a pillar of fire to heaven where angels operated on him. He says he has met Abraham and Paul in the heavenly realm.

Clearly even many sympathetic to Pentecostal theology are apprehensive and are waving “a yellow flag of caution.” One nearby Pentecostal pastor warned his congregation “not to attend any of this counterfeit revival.” Les Grady, editor ofCharisma magazine, wrote in one of his columns: “We have no business teaching God’s people to commune with angels or to seek revelations from them. And if any revival movement—no matter how exciting or passionate —mixes the gospel of Jesus with this strange fire, the results could be devastating.”

But what about the miracles? The healings? When the leaders of the Jews conferred together regarding the healing of the lame man at the temple gate, they had to admit, “for that indeed a notable miracle hath been done by them is manifest to all them that dwell in Jerusalem; and we cannot deny it” (Acts 4:16).

Must that be our answer today? I answer with an emphatic, “No!” The miracles, including the miracles of healings, were clearly part of the apostolic office according to Scripture, and that office was a temporary office in the church (see II Cor. 12:12; Heb. 2:3, 4; Mark 16:20).

But why do the Pentecostal healers succeed and continue? For the simple reason that a large percentage of all the sick will get well anyway, and to the rest the divine healers can blandly and piously say, “you do not have sufficient faith.”

Further, in many instances there is outright fraud and deception for purposes of financial gain. Indeed the wealth and extravagance of many Pentecostal churches and their leaders remind us of Scripture’s warning against false teachers in the church who “through covetousness with feigned words make merchandise of you . . .” (II Pet. 2:3).

In other instances the afflictions are psychosomatic ills removed by psychological means. Physicians contend that healings tend to occur in afflictions such as arthritis, lameness, allergies, headaches, etc.; with such things healing is likely due more to auto-suggestion than to any physical miracle.

Finally, in many instances the power is undoubtedly Satanic. The healings are the lying wonders of the wicked. Prof. David Engelsma writes in the pamphlet Try the Spirits:

The wonders of Pentecostalism, like the miracles of Rome, are fraudulent. They are part and parcel of the only miracles that Scripture prophesies of the last days: the signs and wonders of the false christs and false prophets who would deceive the very elect, if it were possible,

the power and signs and lying wonders of the man of sin who will deceive those who do not receive the love of the truth,

Beware! Do not be hoodwinked by the modern-day miracle mongers!

Often on television or the radio I hear speakers promise that healing is always available for all believers—a statement that approaches logical absurdity. If it were true, need any Christian wear glasses? Or die? Yet what godly person in recent memory has ever defied mortality by not succumbing to bodily malfunction? Surely disease and lowered cellular efficiency is leading each of us—including every faith healer—toward death, and no amount of prayer and faith will reverse the process.

Our heavenly Father, according to His providence, by His almighty power is often pleased to bring healing and restoration. Is it not a wonder each time we recover from illness or injury? Are not the body’s immune system and healing mechanisms utterly amazing? “I will praise thee; for I am fearfully and wonderfully made” (Ps. 139:14a). At times God may be pleased to bring healing and restoration when men, learned physicians, would deem it impossible!

But let us not be deceived by the fraudulent miracles of the Pentecostals. It is incumbent upon us to set our hearts, not upon earthly life and health and strength, but upon the heavenly realities. “For our light affliction, which is but for a moment, worketh for us a far more exceeding and eternal weight of glory” (II Cor. 4:17).

The Feminine Face of the CRC Synod

For more than thirty years the Christian Reformed Church has been moving in a direction of full ecclesiastical equality of men and women. Though there remains an element (likely quite small at this point in history) that continues to maintain that having women in church office is contrary to Scripture, it ought to be clear that there is no turning back. The most recent meeting of the CRC Synod (2008) ought to have made that crystal clear.

In Christian Renewal, July 9/16, 2008 (p. 14), Editor John Van Dyke gives a good picture of the place of women at the broadest assembly of the CRC:

For years it was rare to find an Agenda for the Synod of the Christian Reformed Church without some mention of the subject heading, “Women in Office.” Whether it was via overtures, committee reports or some form of communication, the cause consumed the denomination.

Begun in the late 1960s, almost 40 years later, women for the first time officially occupied seats at the denomination’s broadest assembly, which meets annually in June. Classes in support sent 26 women to Grand Rapids this year, out of the 188 delegates. Of the 26, one was elected to serve as synod’s vice-president, Rev. Thea Leunk, pastor of Eastern Avenue CRC in Grand Rapids. Next to her, as synod President, was Rev. Joel Boot (also last year’s President), and 1st and 2nd clerk were filled by Rev. Leslie Kuiper of Wisconsin and the Rev. Laryn Zoerhof of Indiana.

According to an initial article in the Grand Rapids Press, the obvious was stated in black and white: “The future looks less promising to those who oppose women clergy on biblical grounds,” wrote Religion editor Charles Honey. “Kuiper, the Synod clerk, called the meeting ‘difficult for me,’ (because of his opposition to women’s ordination) but promised to cooperate with Leunk and other women. ‘I know that we’ll work together and work with respect,’ Kuiper said.” From all accounts, from beginning to end, that was the nature of the case.

There were times of “discomfort” for some delegates who, for example, were served communion by women officebearers at the opening service for synod. This prompted discussion, based on an overture, near the end of synod about how best to deal practically with this “problem” in a denomination with two views on the subject that are considered equally valid scripturally, yet in opposition to each other. At the other end of the spectrum there were rumblings from some delegates about the need for equal representation at synod between men and women, on committees of the denomination. “Feeling each other’s pain” has become the new catch-phrase at synod.

“Feeling each other’s pain”?? I don’t think so. Rather, the attitude appears to be, towards those who continue to oppose women serving in the special offices of the church, to put it crudely, “Suck it up; and get with the program!”

. . . Synods in the past tried to walk a fine line by not permitting women elders and ministers to be delegates to synodical meetings. Delegates to Synod 2008 saw not only women delegates, but those in favor of women in office flaunted their view by voting for a woman as vice president. According to the Grand Rapids Press, delegates opposed to women in ecclesiastical office protested the pre-synod service where women elders served the Lord’s Supper. They believed that delegates opposed to women in office should have a male elder serve them. It seems the line in the sand for CRC conservatives has changed from “as long as it is not in my church” to “as long as it is not in my pew.” How long can this last? Synod declared that it was up to the church leading the service who would serve communion.

The lines that conservatives have drawn in the sand over the last twenty years for the sake of unity have been washed away by the waves of tolerance. Although the CRCNA Synod has declared their view of Scripture as valid, it has rebuffed those opposed to women in office at every turn. It has mocked them in their convictions.

Centuries ago the prophet Jeremiah spoke of false prophets who cried out, “Peace, peace” when there was no peace. Today they cry out “Unity, unity” when there is no unity.

What can one say but . . . “sad but true.” What folly to suppose that the Word of God says two opposing, contradictory things! Understand, this is not a problem with the clarity of Scripture. The Word of God is perspicuous, clear, able to be understood. No, it is a matter of apostasy, false doctrine! Mr. Mark H. Vander Pol, a student at Westminster Seminary in California, in the June 2008 issue of theOutlook puts it well:

Throughout the past twelve years of discussion on this issue, Synodical reports have constantly had to redefine the “peace” in the church as a result of its stance on holding both positions as biblically viable. Nobody has tried to completely hide the underlying tension, but some have attempted to cover it up with platitudes and “harmonious” language. That tension cannot be bound forever—it will erupt again, and this latest ruling of Synod might just signal the final chains being broken. 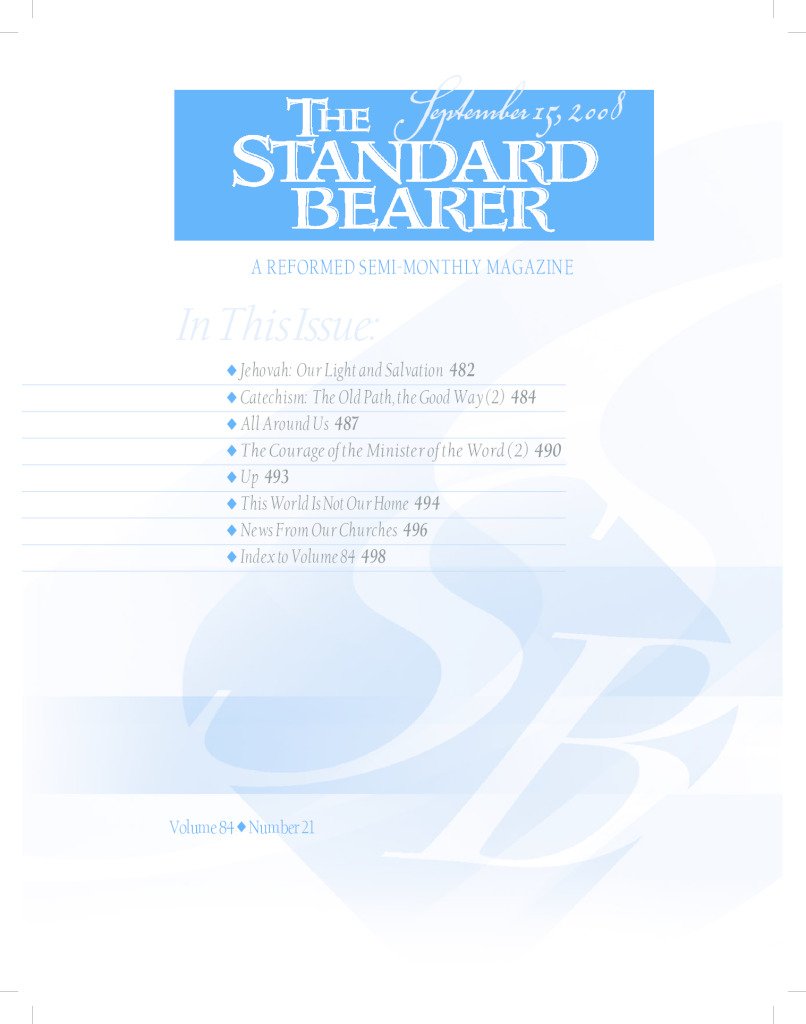