1. Heads As Well As Hearts. 2. Ideology and Co-Existence.

1. Heads As Well As Hearts. 2. Ideology and Co-Existence.

Heads As Well As Hearts

Writing under the above title, one of the editors of Christian Economics writes The Sermonette for the May 3rd issue. The sermonette was built around the text found in Matthew 6:33, “But seek ye first the kingdom of God, and his righteousness; and all these things shall be added unto you.”

“It should be noted that Jesus admonishes us to seek ‘first’ the kingdom of God but not ‘only’ the kingdom of God. We are in perfect agreement that the most important task of man is to seek reconciliation to God. But no one of us should stop there. God has work for every one of us to do and if we stop when our hearts are cleansed and our attitudes are right we will be of small value as servants of God in his efforts to produce a better world.

“God needs useful people as well as good people. To be useful, one must be more than just good. All of us, I think, have known good people who were rather ineffective when it came to conquering poverty, promoting peace, overcoming disease, finding ways to improve education, lift the cultural level of the race or achieve a larger measure of understand­ing and goodwill among men. It is not enough to be good; we must be good for something and contribute to the solution of the problems that vex mankind and hold him in bondage to ignorance, disease, poverty, war, injustice and cruelty.”

“Jesus himself told us to be ‘wise as serpents.’ In fact we find the Scriptures filled with emphases upon the im­portance of becoming competent and useful by acquiring wisdom and knowledge so that we may determine and exe­cute right action. Good intentions are fine and love in a sick room is always useful; but no intelligent person would stop there. We always want the physician with his great knowledge and skill.

“‘Seek you first the kingdom of God’! . . . but if we are to be successful in our quest we must study long and earnestly to acquire the knowledge and skill that will make us effective servants of God for the solution of many knotty problems such as how to avoid inflation, maintain sound money, increase production, achieve better secular and spirit­ual education, reduce crime, promote peace and abolish war.

“To be sure Christian dedication and devotion come first but there unto must be added skill and competence if we are to be effective cooperators with God in achieving the kind of world we believe He has designed for his children.”

It appears from the above that “the kingdom of God” which we are to seek first is the present world which can be attained only after we help God straighten out the mess which men have made in it. The author of the sermonette doesn’t seem to know anything about another world that is spiritual and heavenly in character and in which the king­dom of God will be perfected. He wants “head” and “heart” to be united in making this present world a better place to live in, and only then will the kingdom of God arrive. He is still not only materialistic, but also postmillennial and humanistic in his views. It seems that it did not help a bit for the correspondent to scold him.

Such is the title of a pamphlet recently mailed to me, and I suppose to many other American citizens as well as to some 83,000,000 other people throughout the world. No single person claims to be its author, though the predominat­ing spirit that pervades the pamphlet is that of Dr. Frank Buchman, the father of the movement known as Buchmanism.

The purpose of the pamphlet is to counteract the ideology infiltrating our world today with its destructive forces, and known as Communism. The pamphlet knows of no other force able to destroy the communistic ideology than the ideology it cherishes, namely, Moral Re-Armament. Moral Re-Armament claims to be “a superior ideology, with a superior strategy, because it meets the needs of the whole man and because it is available for all men everywhere—non-Communist and Communist alike. It is far more than the answer to Communism. It is the revolutionary idea that is putting right what is wrong and producing for every nation the incorruptible and inspired leadership that alone can create a full and free life for every nation.”

Even Radio Moscow, according to the pamphlet, ad­mits that “Moral Re-Armament is a global ideology with bridgeheads in every nation in its final phase of total ex­pansion throughout the world. It has the power to capture radical revolutionary minds. It is contaminating the minds of the masses. It substitutes for the inevitable class war, the eternal struggle between good and evil.”

The principle of the Moral Re-Armament ideology is set forth most clearly on page 13 from which we quote:

“Moral Re-Armament is giving men a moral ideology, a new motive for industry and trade, and a new basis for united action. Dr. Buchman says:

“‘Only a new spirit in men can bring a new spirit in industry. Industry can be the pioneer of a new order, where national service replaces selfishness, and where industrial planning is based upon the guidance of God. When labor, management and capital become partners under God’s guidance, then industry takes its true place in national life.’

“The new type of man that Moral Re-Armament is producing finds that the basic problem of industry is not economic but moral. The four moral standards—absolute honesty, absolute purity, absolute unselfishness, absolute love—make it possible to decide issues on the basis of what is right and not who is right.

“This is the alternative to the class struggle for industry and it is through the adoption of the class struggle by labor and management that Communism has been able to make such inroads into key industries. Its grip can only be broken by men and women armed with the strategy, the unity and the commitment of a superior ideology. This comes through the acceptance of the guidance of God when every man can know the immediate action he can and must take.”

The Moral Re-Armament ideology claims for its en­thusiastic adherents such names as, John Riffe, Executive Vice-President of the C.I.O.; Philip Murray, ex-President of the C.I.O. and United Steel Workers; Conrad Adenauer and Robert Schuman, leaders of West Germany; the late General John J. Pershing and Admiral Richard E. Byrd; the Commander-in-Chief of the NATO forces in Central Europe, General Valluy; General Bethouart, Member of the French Senate for Morocco; Air Commodore Nigel Blair-Oliphant, Director of Weapons Engineering of the British Air Ministry; General Guisan, wartime hero and Commander-in-Chief of the Swiss Army; Vice Admiral Morton L. Deyo, wartime Commander of the North Atlantic Destroyer Fleet; Niro Hoshijima, senior Member of the Japanese Diet; Rajmohan Gandhi, grandson of the Mahatma of India; and many other dignitaries, as well as former leaders who have broken with the Communist party.

As to the term “co-existence,” the pamphlet explains the Soviet version of this concept. Mr. Kruschev, so the pam­phlet asserts, made this observation in 1956:

The pamphlet concludes, “Moral Re-Armament is democ­racy’s true ideology. It gives democracy the moral fiber it lacks today. That is why the choice for the world is not war or co-existence. It is Moral Re-Armament or Communism.” The pamphlet, therefore, insists that everyone must have some ideology. It insists that there are only two ideologies from which you must choose one: Communism, which is the materialistic ideology; or Moral Re-Armament, which is the spiritual ideology. If you do not choose for the latter, you will be brought under the destructive power of the former. Very impressively the pamphlet sets forth its objective, and if you don’t ask any questions you may easily be carried along with its philosophy.

We confess that when we read in the pamphlet the name of Dr. Frank Buchman, we became not a little suspicious. And, as we suggested above, if he is not the author of the pamphlet, his spirit certainly predominates in it.

Concerning Dr. Frank Buchman, whose spiritual antics are rather thoroughly discussed in The Chaos of Cults by J.K. Van Baalen, and again by Charles W. Ferguson in his The New Books of Revelations, a little must be said. He was of German-Swiss Lutheran descent. He was born in Pennsburg, Pennsylvania, in 1878. He studied at Muhlenberg College and at Mt. Airy Seminary, and was ordained to the ministry, serving his first charge at Overbrook, PA, where he organized “a settlement house for boys.” We are told that when he had a clash with some board members, he resigned. Thereupon he toured Italy and England, where “he had his first heart changing experience under the preaching of a woman whom he heard speak at Keswick on the Cross.”

Buchman, it seems, did not follow any particular doc­trines; in fact, he did not care much for doctrine. Buchman believed “that religion is not so much a matter of emotion, nor of doctrine, as of the will. His task now became two­fold: to be led by God’s will, and to induce others to be led by God’s will.” From The Chaos of Cults, p. 197, we quote the following paragraph which pretty well describes the philosophy of Buchmanism:

“Pondering further the problem of sin, having seen his own sin at the Cross and surrendered his pride, he reached this conclusion: ‘The degree of our freedom from sin is the degree of our desire to be free.’ ‘Further,’ says Russell, ‘he believes that wherever possible one should not only hate sin, but confess sin and forsake sin, making restitution to the person sinned against.’”

This philosophy “Frank,” as he is called by his followers, carried into the colleges and universities in England and America in the hope of “cleaning them out.” He conducted “house-parties” where young men and women would gather to confess openly to all present their secret sins.

It is not our purpose here to describe in detail the antics of Buchmanism. We only mention the above for the unin­formed reader that he may know that Buchmanism is not a movement connected with any church, but a mystical move­ment initiated by Frank Buchman which is now bent on also cleaning up the political mess in the world on the basis of the philosophy, or as they prefer to call it, the ideology of Moral Re-Armament. 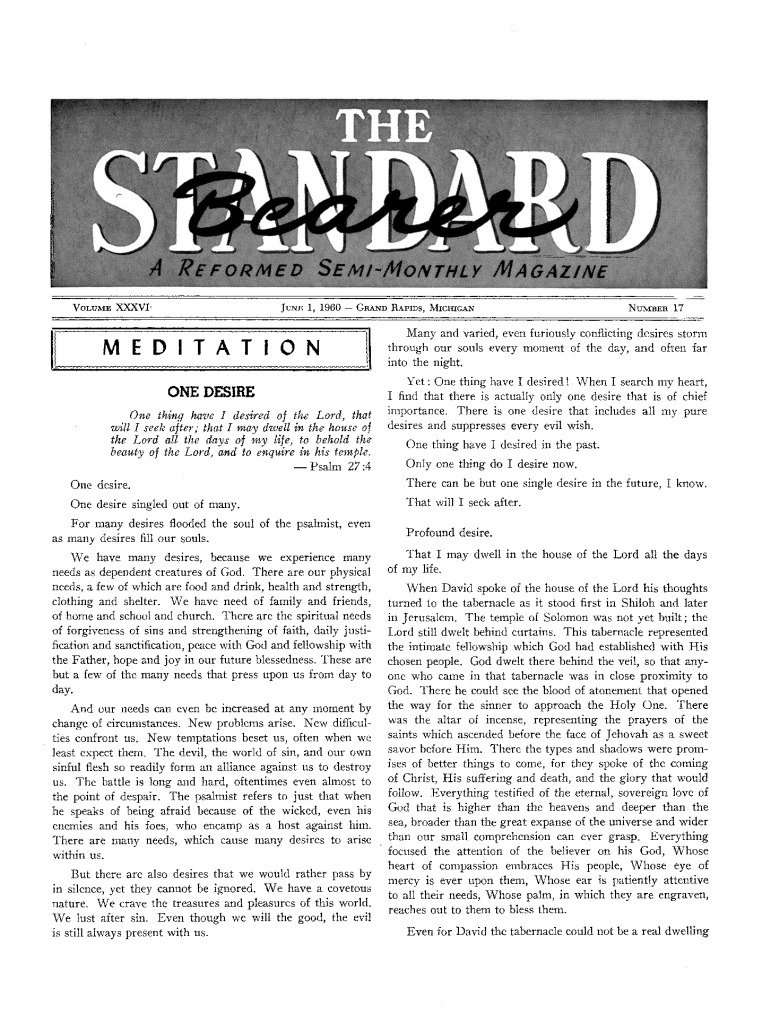