1. Doug Wilson’s Attempt to Disavow the Federal Vision. 2. The Globalization of Immorality

1. Doug Wilson’s Attempt to Disavow the Federal Vision. 2. The Globalization of Immorality

For years Doug Wilson has identified himself with the heretical movement known as the Federal Vision. He participated in the Auburn Avenue Conference of 2002 that ignited the Federal Vision controversy. In 2007 he affixed his signature to “A Joint Federal Vision Profession” with the other leaders of the movement. He is the presiding minister of the Communion of Reformed Evangelical Churches (CREC), the denomination that has become the haven for the Federal Vision proponents. But now Wilson says, “I have decided, after mulling over it for some years now, to discontinue identifying myself with what has come to be called the federal vision.”1

Wilson is repentant and seeking forgiveness. The sin he confesses is not the sin of teaching false doctrine. He does not express any sorrow for defending and promoting views that contradict Scripture and the Reformed confessions. His sorrow is over the manner in which he treated some of the critics of the Federal Vision. He admits that he did not see that some of the critics were “responsible” and made “a serious attempt at fair-mindedness.” But Wilson treated them as if they were in the “same boat” as those who were guilty of “rash accusations, political maneuvers within the church, and theological incompetence.” Wilson admits he did not treat the competent critics of the Federal Vision fairly, and “thought [he] needed to say so publicly.”

But Wilson frankly states that he is not changing or retracting any of his beliefs. He is only changing “what I will call what I believe.” He is not planning on resigning from the CREC or seeking to purge it of those who hold to the Federal Vision, such as Rich Lusk, Steve Wilkins, or Peter Leithart. These men are his “friends” and he embraces the “commonality” he has with them. Though he does not want to share the name Federal Vision with his friends anymore, he continues to “affirm [with them] everything I signed off on in the Federal Vision statement.” He will continue to “speak of the objectivity of the covenant,” which means he is committed to the conditional covenant view that is the root of the Federal Vision heresy. He has not repudiated and, therefore, at this point one must assume that he continues to affirm, the Federal Vision’s heretical doctrines of conditional, losable salvation (conditional election, justification, and preservation). Even though he will continue to maintain personal and ecclesiastical friendships with proponents of the Federal Vision, and even though he is not removing his name from “A Federal Vision Profession,” Wilson no longer wants to be identified as Federal Vision.

Wilson recognizes that there is a Federal Vision movement and that there are men who are accurately identified as Federal Vision. He offers no explanation in his article of who these men are and how he differentiates himself from them. He mentions a description he formerly used to describe these men as “oatmeal stout federal vision” and himself and others as “amber ale federal vision.” Apparently, he wants the name Federal Vision to apply only to the bold proponents of the movement and not to himself and others who are more muted in their teachings. He writes, “What I used to call amber ale federal vision should just be called…something else.” Wilson gives the impression that he is not sure what to call himself now. He even suggests that his readers can call his views what they want, except for Federal Vision.

But Wilson does hint at how he wants to be identified. He writes, “I was, am, and will remain a Westminster Puritan within an irenic river of historic Reformed orthodoxy.” Here is the explanation for why Wilson wants to disavow the Federal Vision name. Many Reformed and Presbyterian denominations, although they have failed to discipline men holding to the theology of the Federal Vision, have attempted to condemned the name. The OPC, PCA, and URC, to name a few, have all commissioned reports that were intended to condemn the Federal Vision. They have placed the Federal Vision outside of the camp of Reformed orthodoxy. The Federal Vision has been identified as heresy and, although Wilson did not think his theology was erroneous, he came to the realization that no matter how much he tried to explain himself, as long as he identified himself with the Federal Vision, people would conclude, he states, “I must be a heretic.” Leithart, who openly speaks of “the end of Protestantism,” does not seem to mind being labeled a heretic who is not Reformed. But Wilson does mind. And he would like to change names from heretic to Reformed.

But he does not want to give up his Federal Vision theology. He cannot escape the truth of a slightly revised statement of Shakespeare: “A rose by any other name is still a rose.”

The Globalization of Immorality

Perkins also provided two examples of how the “State Department has loudly promoted overseas abortion policy and been quick to put taxpayer funds and resources behind it—regardless of other countries’ deeply-held beliefs.”

Perkins is cautiously optimistic. He hopes that the Trump administration will put an end to these policies and use the State Department to promote “religious freedom” around the world. Regardless of what the Trump administration does over the next four to eight years, the Lord used the previous eight years to prepare the way for the rise of the anti-Christian kingdom that will be united in immorality. And the United States has played in the role of the rise of that kingdom. She has played the lead role in the globalization of immorality. Is there really any hope that a President Trump will tap the brakes on the spread of immorality?

Our hope and prayer is for the coming of Jesus Christ, the end of this present world, and a new world of global, yea, universal righteousness.

2 “Trump Will Have His Hands Full Fixing Social Extremism in the State Department,” The Family Research Council, http://www.frc.org/get.cfm. 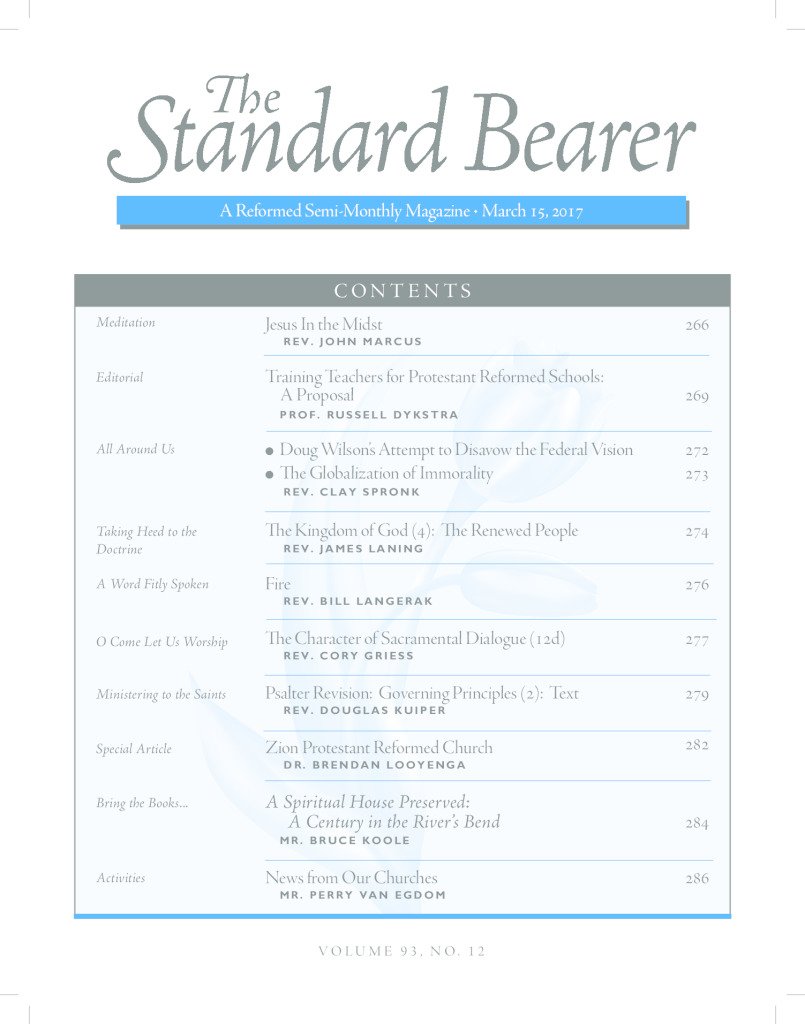