1. Church Membership. 2. The Revised Standard Version of the Bible. 3. From the Synods. 4. Presbyterian USA

1. Church Membership. 2. The Revised Standard Version of the Bible. 3. From the Synods. 4. Presbyterian USA

The Christian Herald, a liberal religious magazine, recently conducted another annual survey of church membership. The following figures are presented:

Church membership in the United States rose to 85,705,290 in 1950, a record—making 55.9 percent of the population. The total membership was up 2,950, 987 over the previous year. Lest you should become too joyful, however, we would point out that included in these membership rolls are many churches that we could not even honor with the name church, and included among the members are those whose names are inscribed and -nothing more.

Taking the above into consideration we quote the following Christian Herald figures:

Jewish congregations, on which there were no new statistics remained listed at 5,000,000.

The Southern Baptists who added 318,624 members in 1950, had the biggest gain of any single Protestant denomination.

The Revised Standard Version of the Bible

Thomas Nelson and Sons, publishers of the revised Bible, have revealed that there will be nearly 1,000,000 copies printed in the first edition of the revised standard version of the Bible. The retail value of this printing order, the largest ever placed for a full-sized book by a commercial publishing house, is more than $5,000,000.

This is the revision which has been criticized as being not only the work of modern, liberal scholars, but of revealing this fact in its failure to take into account the truth that the Bible is verbally inspired.

5.  Made a special place in the Seminary for retiring College president, Dr. Schultze.

6.  Decided to buy land and build a $100,000 denominational headquarters in Grand Rapids. This will be located on Fuller Avenue across from our First Protestant Reformed Church.

7. Among other items, it was decided to discourage Boy Scout membership instead of encouraging the membership in the Boys Club movement. To appoint a negro evangelist, a graduate of Westminster Seminary, to do follow-up work for the Back to God Hour among the negroes and decided to wait one year to find a successor to Dr. Volbeda of Calvin Seminary in the field of practical theology. It was decided to appoint Dr. Hendriksen for an additional year instead of giving him a life appointment in the field of New Testament at the seminary. During the ensuing year the question of methodology and content of the courses will be investigated. The charge or suspicion which was voiced in several places concerning the allegedly socialistic leanings of professors at Calvin was evidently not substantiated. At least those against whom the finger was raised were acquitted and reappointed.

The only item of interest to us at the moment is the decision of the General Assembly of this church to send a letter of repentance and confession concerning the injustices perpetrated upon the Southern Presbyterians in the years 1860 and following. This, of course, with the idea of removing any possible offense with a view to eventual merger. 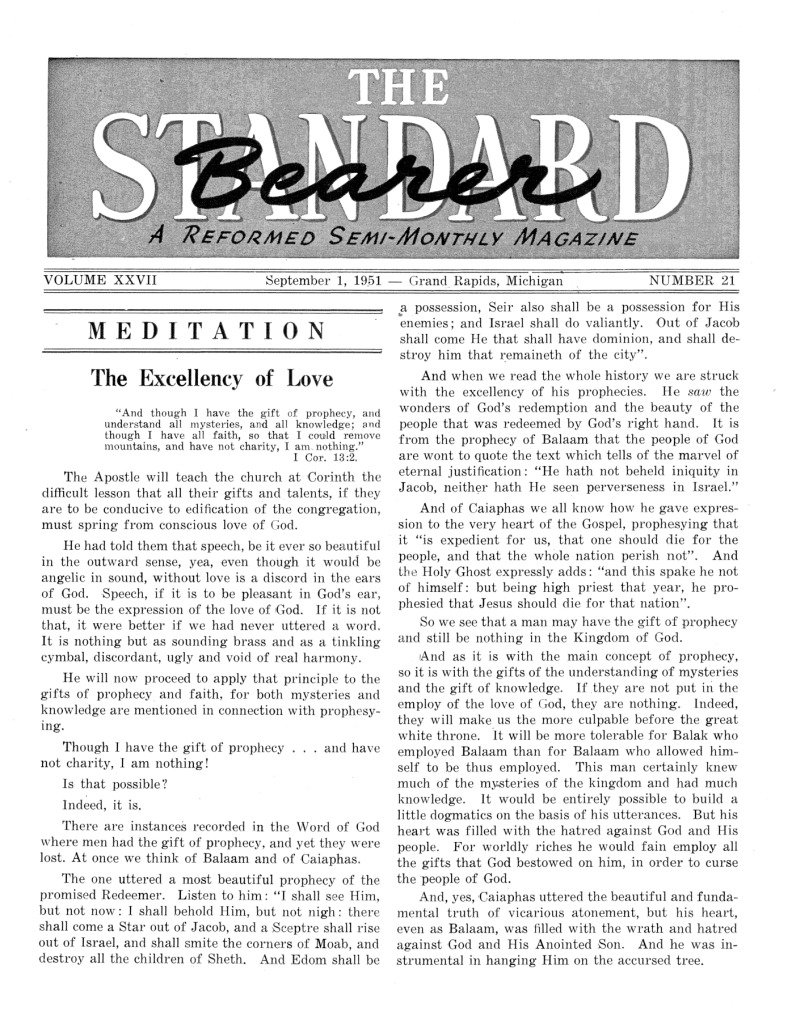