I’ve been meaning to write you a note of appreciation for your articles that give a much needed warning to students who are attending or planning to attend a Christian college. I can identify with many, many of the examples and instances you brought out in your articles. The “kingdom” language and “engaging” or “transforming” culture were philosophies that figured prominently in the instruction and life at the Christian college from which I graduated recently.

Looking back, I know that I, for a time, was drawn in by that language. I can see it in some of the papers I was assigned to write for my communication courses. While I will always be grateful for my time at that college and look back on those years with great fondness, I find myself not so thankful for the education I received and the friends that I made as I am for God’s keeping me on the right path by providing me with good friends, an encouraging and supportive family, and a wonderful PR church family to turn to on Sundays.

A Christian college can give a false sense of security for a Protestant Reformed believer. Thank you for your articles!

Having read all of Professor Gritters’ editorials entitled “Pastoral Warning to Students in Christian Colleges,” I make three comments.

First, thank you for exposing and warning against this widely held view that “puts God’s church in the background and God’s kingdom…in the foreground” (p. 6), that makes “the church narrow and kingdom wide” (100), and that considers the church “merely a tool (only one of many) to establish the kingdom” (52). This warning is timely.

Second, Prof. Gritters refrains from using footnotes “so that you are not distracted by names and footnotes but concentrate on the views” (53). I speak for myself: I am the worse for the absence of these footnotes. Footnotes are not mere evidence that a man is scholarly; they are aids to the interested reader who wants to read more on the subject. The uninterested reader can easily ignore the footnotes; but the interested reader cannot consult them if they are absent. Could Prof. Gritters give me his references that are “all…at hand” (53)? I would appreciate that.

Without doubt, there is a close relationship between God’s church and kingdom (pages 54-55, 77-78). But are the two identical? Is the word “is” the right word to use when speaking of their relationship? Especially I wonder this, because Prof. Gritters clearly speaks not only of the invisible church as being the kingdom, but of the visible church.

I raise the questions, not to assert that the professor is wrong, but for my own deeper understanding.

Perhaps Prof. Gritters’ identification of church and kingdom is a figure of speech by which he overstates the case to make his point. I would not fault him for this—every speaker or writer does this, and the audience usually understands it so.

But if this identification of visible church and spiritual kingdom, without any qualifiers, is a reality that I have missed to this point, I’d like to see it more clearly.

Thanks again, professor, and editorial staff, for your hard work bearing the standard.

As to footnotes. . . . . Until recently, the SB has had very few footnotes, since it is not intended to be a scholarly magazine, which does not mean that the articles are not researched carefully. We hope all the articles have good research in their background. Rev. Kuiper has been sent the version of the editorials that includes references to authors and publications.

The Standard Bearer appreciates letters. It shows us that the magazine is being read, thoughtfully. 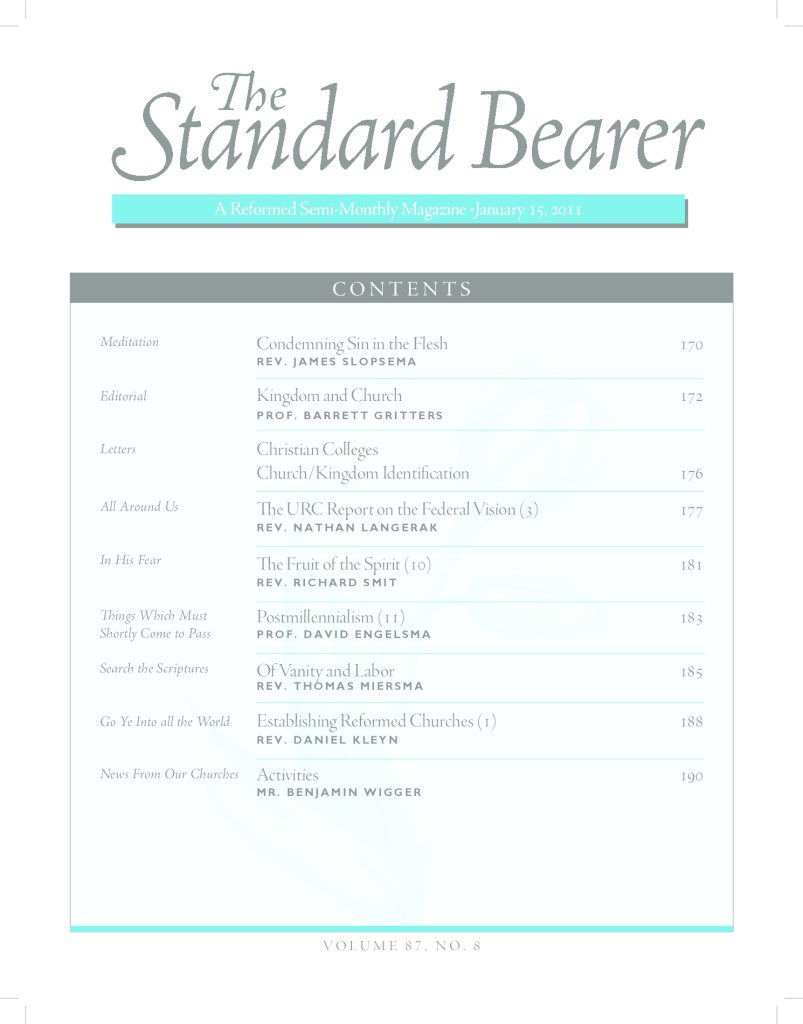